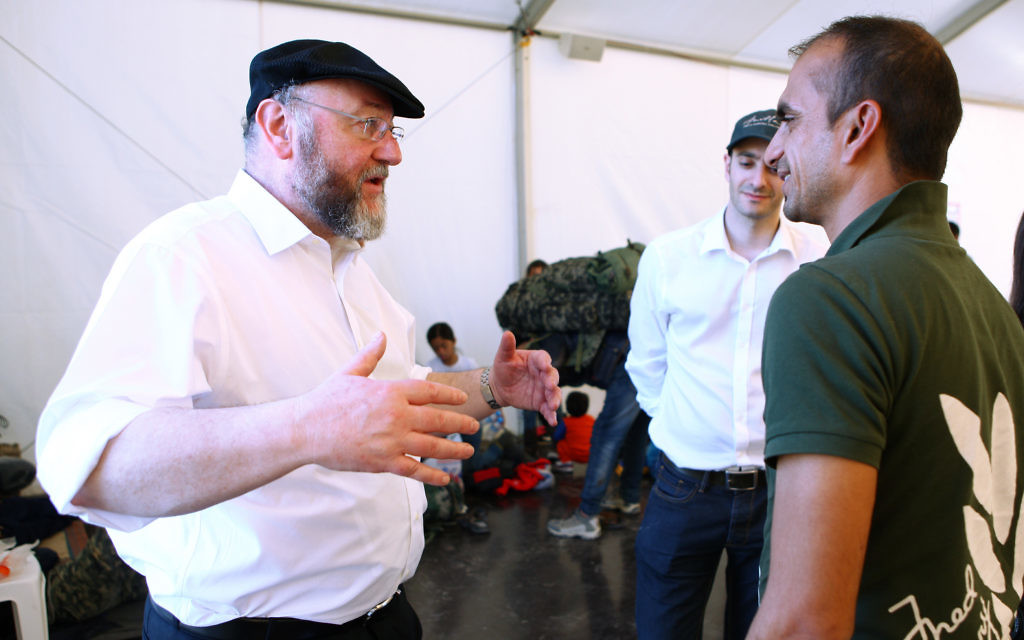 The Chief Rabbi in Greece, speaking to refugees

The Chief Rabbi in Greece, speaking to refugees

Picture a young Muslim man, in his early 20s. Exhausted but determined, he arrives in Greece after a long and dangerous journey. He registers with the authorities and has his fingerprints taken.

He could be one of many thousands of people. But in the sharp focus of what I have seen and heard in the last few days, he might well be one of two people. He could be the man, consumed by hate and murderous intent, who blew himself up outside the Stade De France last Friday night in Paris – officials suggest he was carrying documents registered in Greece. Or, he could be one of the young men I met on Thursday at the Idomeni refugee camp on Greece’s northern border, emotions clearly evident in his eyes: pain, desperation, sadness and all too little hope. Some will find in this scene a reason to reach out a hand of compassion to refugees; others will see a reason to close our borders.

There have been many different reactions to the horrific massacre in Paris that has devastated Europe, ranging from bewilderment to rage. Of course, there is no ‘correct’ response to a phenomenon like this, but the most natural reaction is to try and simplify it and its causes.

When faced with something so deplorable, so unbelievably wicked, we instinctively try to make some sense of it so that we can once again make sense of the world. As such, we are prone to looking to apportion blame. Instinctively, it is not enough for us to blame the perpetrators. What could possess an individual or group to do something so very evil? Yet, with every rationalisation and oversimplification there is great peril.

Some rationalise that there must be something inherently evil about Muslims and their faith, leading to a sharp rise in Islamophobia and hate crimes against innocent people. Others take the view that we only have ourselves to blame for this violence because Western foreign policy has provoked Muslim states and that we are guilty of stoking the fires of extremism. Both positions are guilty of gross oversimplification and undermine our collective efforts to find a solution.

These are extreme examples, but to some extent, we are all guilty of what social scientists call “confirmation bias” – we have a preconceived idea and we selectively choose from the facts so they fit with our worldview.

Adding inconvenient complexities is something we try to avoid because it makes the world a more challenging place.

But, whether we choose to accept it or not, complexity is a fact of life. Between 4,000 and 10,000 people are passing through Idomeni every day. It would be impossible to make any kind of generalisation about the type of people they are, their intentions and motivations. Neither the sprawling humanitarian crisis, which we are now confronted with, nor the scourge of terrorism are caused by any single factor. They are intertwined in a multi-dimensional web of political, religious, economic and sociological complexity.

Last Thursday, I was joined by Dayan Ivan Binstock, Rabbi Danny Bergson, Rabbi Boruch Boudilovsky and Rabbi David Mason on an eye-opening visit organised by World Jewish Relief. I spent time talking to men, women and children who, I firmly believe, are the victims of evil and not the perpetrators of it.

There is no question that a dramatic influx of refugees brings with it very serious security concerns, but try and explain that to the young Afghan man we met, who had heard that IS were coming to forcibly conscript in his area and hid underground for two days before barely escaping with is life. Meeting him created for me another layer of complexity.

But, can we ignore media reports which quote US intelligence sources who believe that IS is employing a ‘Trojan horse’ strategy, infiltrating groups of refugees who are making their way to Western European countries to commit terror attacks? Another layer.

Documents recently highlighted by WikiLeaks actually indicate that encouraging a clampdown on immigration in Europe is a key element of IS strategy because they believe it helps them to radicalise young, disillusioned Muslims. Another layer.

Trouble invariably follows when people insist that they have a simple solution to a complex problem. My visit to Idomeni made it clear to me that the solution to the refugee crisis cannot be simplified or abridged.

The victims of IS, of the Syrian civil war or of any other factor driving these vast challenges – be they in a Greek refugee camp or on the streets of Paris, deserve better.