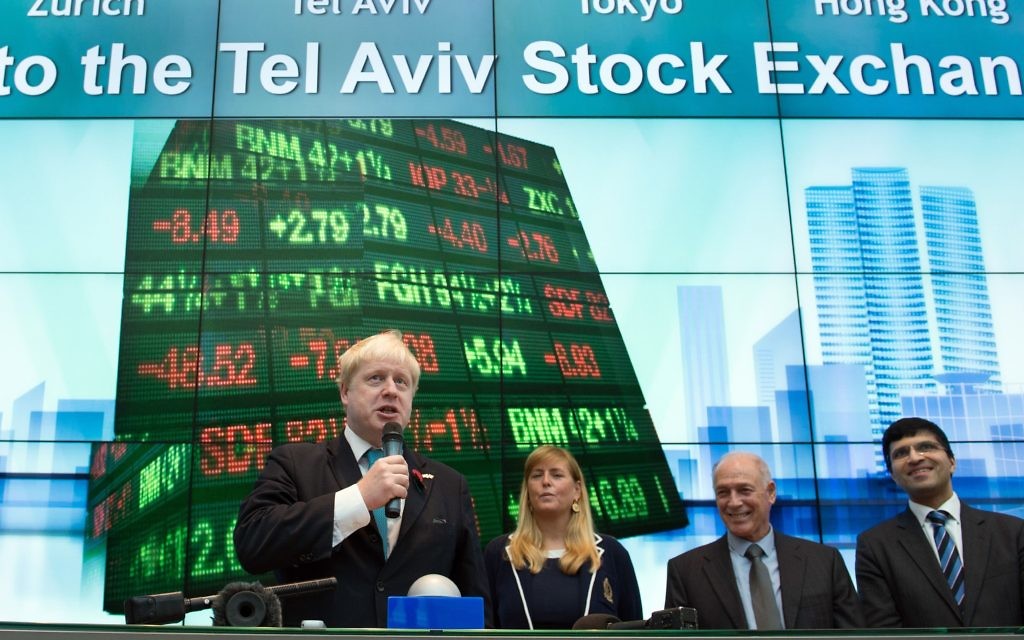 Boris Johnson opens trading at the Tel Aviv Stock Exchange at the start of a four day trade visit to Israel whilst foreign secretary in 2015. Photo credit: Stefan Rousseau/PA Wire

Jewish News first asked me for a quote on Boris Johnson’s planned visit to Israel back in July 2013.

It might have taken almost two-and-a-half years for the London mayor’s visit to come to fruition, but the long wait and extended planning made his visit all the more remarkable. Since then, buzzwords such as “fintech”, “tech city” and “accelerators” have entered the vernacular.

In the past two and a half years, numerous Israeli companies have opened offices in London, creating hundreds, if not thousands, of jobs and indeed list on the London Stock Exchange.

The mayor’s visit underpinned all that is to be gained from a strong relationship between both the UK and Israel and London and Tel Aviv. The UK is exciting to Israelis and increasingly viewed as a springboard to the rest of Europe and the world.

Indeed, we are starting to see UK-Israel accelerator programmes, such as the William Hill Accelerator, with hubs in both London and Tel Aviv, as corporates access the Israeli start-up world. Financial technology and cyber security are areas in which some great synergies between the UK and Israel exist.

When Israeli innovation and London’s status as a global financial centre are combined, you have a world-beating proposition.

Boris Johnson is an exceptionally competitive man, always looking for yet another area in which London beats competitors.

Yet despite his competitive nature, the key outcome of his visit to Tel Aviv is that of the recognition of the strengths of partnership and the creation of win-win scenarios.

The quote I gave in July 2013 said that “the two economies are highly complimentary, and when business is put ahead of politics, significant economic benefits can be seen for both the UK and Israel”.

Despite the mayor being a politician, in Tel Aviv he put business first and, as evidenced by the positive messages surrounding his visit, this week might well be the tipping point towards even stronger business and economic ties between the two countries.

• UK Israel Business is a bilateral chamber of commerce