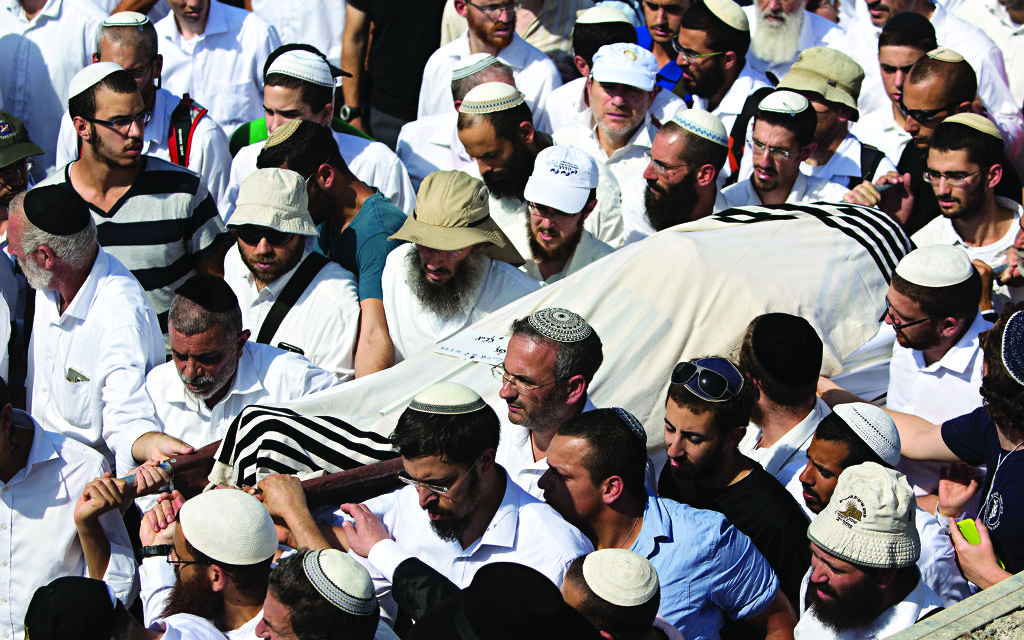 Israeli relatives and friends carry the body of Rabbi Nehemia Lavi, during his funeral at a cemetery in Jerusalem, Sunday, Oct. 4, 2015. In an unprecedented measure, Israeli police barred Palestinians from Jerusalem's Old City on Sunday in response to stabbing attacks that killed two Israelis and wounded three others, as Israel's prime minister vowed a "harsh offensive" to counter rising violence. (AP Photo/Sebastian Scheiner)

Are we in the midst of a Third Intifada? After years of security cooperation between Israel and the Palestinian Authority a series of violent attacks has swept across East Jerusalem and the West Bank. This is characterised by ‘lone wolf’ stabbings, rock and Molotov Cocktail throwing and shootings. It looks spontaneous, but to what extent is it being encouraged?

Palestinian support for violence has spiked in recent weeks, driven by the mistaken belief that Israel intends to change the status quo on the Temple Mount in Jerusalem – stirred up by Islamist incitement, and unhelpful activity and rhetoric by the Israeli far-right.

The context however, is a diplomatic vacuum and the limbo it leaves, not least in East Jerusalem. Mahmoud Abbas has never seemed interested in negotiating with Netanyahu. He has for years been declaring negotiations a ‘failure,’ instead pursuing unilateral recognition internationally, while encouraging unarmed ‘popular resistance’.

But Netanyahu had only last week reiterated his call at the UN for direct talks without preconditions. Abbas is playing a dangerous game. Confronting Israel is vital to boost his waning legitimacy. But he cooperates with Israel against the common foe, Hamas. The Islamist group, not yet ready to fight another conflict from Gaza, seeks unrest in the West Bank and East Jerusalem to undermine Israel, weaken Abbas and expose him as a collaborator.

Hence Abbas praises the ‘resistance’ and renounces the Oslo framework while simultaneously allowing his security forces to work closely with Israel.

In this respect the situation is different from the First Intifada, where no Palestinian leaders were able to restore calm and the Second Intifada, in which Arafat sought to lead the escalating conflict with devastating consequences.

In Israel, Netanyahu is caught between the desire to avoid escalation and the need to look tough and deter further attacks, with right-wing coalition partners seeking to outflank him.

The shared interest of Netanyahu and Abbas may help prevent a full-scale conflict. But given Abbas’s weakness, and the absence of a diplomatic framework, more violence is likely.

The UK and EU should urge both sides to cut the rhetoric and press Abbas to urgently re-engage in constructive bilateral talks with Israel.