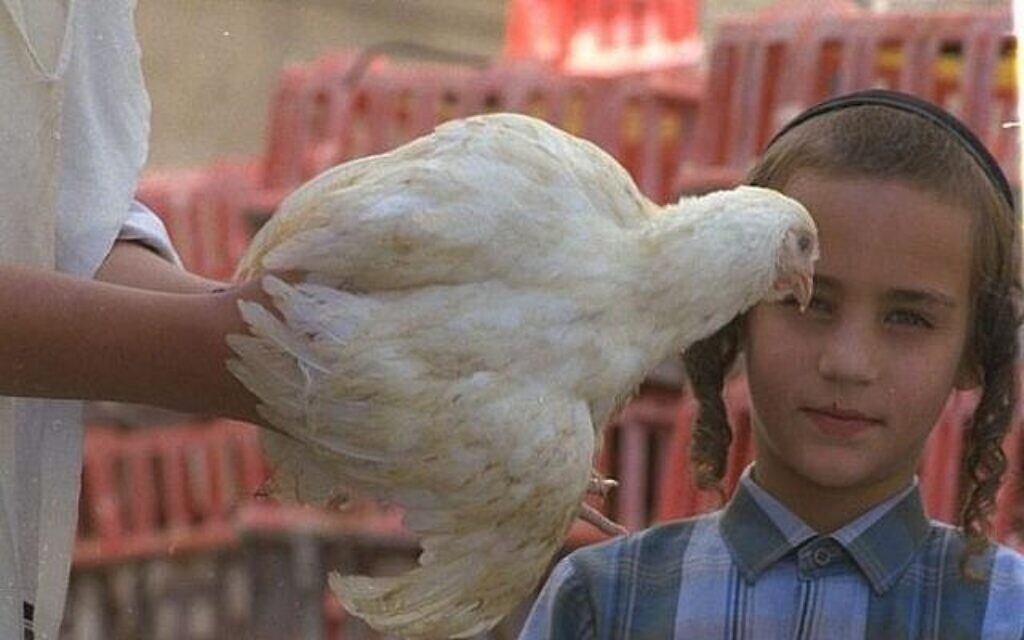 Kapparot ritual on the eve of Yom Kippur

Chinese food and I have always had a long term love affair. But our relationship was truly tested last Friday night. Looking down at my plate of steaming, succulent sweet and sour chicken, for the first time in my life, I just couldn’t bring myself to consume it.

Now, everyone who knows me is well aware I’m the last person to go veggie. I’m usually the one who teases my lettuce-loving friends at any opportunity.

But, for the first time in my life, I actually understand where vegetarians, vegans and the like are coming from.

I have been recently haunted by the horrifying videos circulating Facebook, of squawking chickens cooped up in crowded crates in their dozens, awaiting the pre Yom Kippur kaporas.

It brought back disturbing memories of sights no child should have to see in the safe haven of their primary school playground.

Crates upon crates of clucking chickens, feathers floating around, the dark stain of blood on the pavement spreading like spilt kiddush wine.

Accompanied with the foul stink of faeces, the flapping of frightened fowl grabbed roughly by their wings.

The circling around my head, the chanting of the prayers. The overwhelming feeling of not wanting to but feeling I had to. Running to retch in the toilets afterward, rinsing my mouth repeatedly to get rid of the rancid taste which remained all day.

That same scene repeated itself annually for so many years, but as a dutiful student I accepted it as the done thing, just another age old tradition that didn’t sit comfortably with me but nonetheless had to be carried out.

Little did I know then that according to many rabbis now, using chickens for kaporos is wholly unnecessary. Money is considered a perfectly good substitute for the ritual, however, many chassidic groups still choose to use chickens, as it is considered a ‘hidur mitzvah’ (elevating the mitzvah).

But to me, the only elevation I witnessed when watching the live footage was that of the chickens, held high above heads.

I’m not denying that there are certainly good intentions there, with the chickens being given to the needy afterward, but what myself and many others were distressed by was the total disregard for the prohibition of tzaar balei chaim (cruelty to animals), as well as the rampant chillul hashem (desecration of G-d’s name) going on.

I strongly believe that living among non Jews is not the place to publicly do this even if regulated, but in Israel if this is done under proper supervision and regulated, it may be a different matter.

To set the scene of the clip, on the streets of New York an entire area was cordoned off, NYPD officers casting a watchful eye on the proceedings. An animal rights protester was filming live, capturing the cruelty that was going on. Many other protesters were crouching down by the cages, trying to calm down the terrified chickens.

What they saw was rough handling, rampant overcrowding and the tossing of half dead chickens back into cages where the live ones clucked around them in distress. A section dedicated to the methodical slaughter of each chicken carelessly tossed over the counter. Knives glistening with blood, the whole scene reminding me of that gruesome movie Chicken Run.

I later found out from an insider that no food or drink was given to the poor poultry over the long Shabbat, due to the adherence of the prohibition of not feeding animals that don’t belong to you.

But I ask, where is the adherence to the halacha of compassion, which must be shown towards all of G-d’s creatures?

I was also shocked and sickened by the callous behaviour shown towards the non Jewish woman filming.

Crowds of jeering young boys surrounding her, shoving her, trying to block her camera with cardboard. Yes, it would certainly be convenient to dismiss her and the many others as troublemakers, anti religious activists. Conveniently disregarding the fact that they are rightfully challenging something that refuses to challenge itself for the sake of tradition.

It was obvious from the many horrified, mostly antisemitic comments left under the videos that to any secular outsider, the scene seems barbaric.

Other Jews might say to this ‘oh there will always be an excuse for anti semitism, it’s an anti religious agenda’. I and many other observant Jews strongly dispute this. It’s clear that it is an anti animal cruelty agenda being advocated, which needs to be carefully considered by any Jew with a conscience.