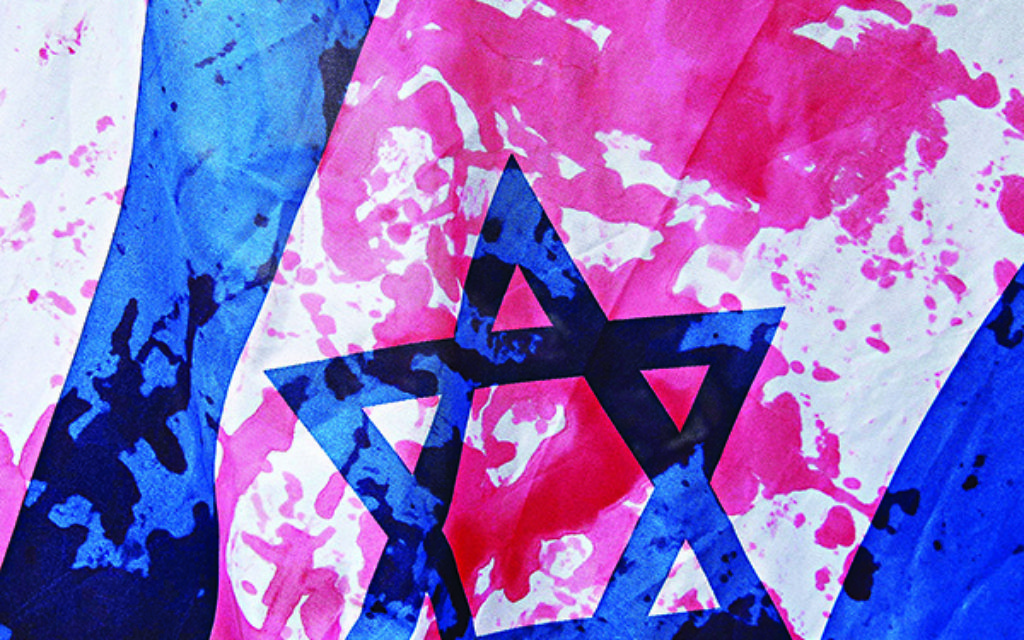 A blood-stained Israeli flag at a pro-Palestinian protest.

THERE’S NO evidence Jeremy Corbyn is an anti-Semite. But the storm over his dodgy associates has thrown up ample evidence that the modern left doesn’t take anti-Semitism seriously.

It’s extraordinary. Ours is an era of super-sensitivity towards race and prejudice. A politician who cracks a less-than-PC gag about black people can expect a thorough Twittershaming. Criticise Islam and you’ll be diagnosed as suffering from the mental malaise of Islamophobia. Share a platform with a BNP nutjob or Christian evangelical who hates gays and you’ll be frogmarched out of polite society.

Yet what has been the left’s response to revelations that Corbyn rubbed shoulders with anti-Semites? In a nutshell: “Chill out. Stop making a fuss over nothing.”

All of 21st-century Britain’s racial sensitivities seem to fly out the window whenever Jews are involved. Corbyn, far from facing expulsion from the dinner-party set for having mixed with racists, is being protected from criticism by the dinner-party set. They’ve erected a moral forcefield around him.

So Yasmin Alibhai-Brown, who frequently frets about Islamophobia and the white observers who apologise for it, described the criticisms of Corbyn as “political trickery”. She even peddled a dodgy-sounding theory for why Corbyn is facing attack. An “unholy alliance” of “the right, Blairites and hard Zionists” has clearly set out to besmirch his good name, she wailed. Those bloody Zionists and their pesky alliances. All this from an observer who normally treats shoulder-rubbing with racists as a scourge.

Labour MP Diane Abbott, never normally shy to call out racism, also sought to cover Corbyn’s back. MPs are too busy to check the backgrounds of everyone they share a platform with, she said, before accusing Corbyn’s critics of “plucking incidents out of a very long career”.

A writer for Electronic Intifada said the “organised supporters of Israel” – sounds sinister – are throwing mud at Corbyn because they don’t like his criticism of Israeli militarism.

It is striking that for some pro-Corbyn, anti-Israel types, the really wicked people are not the Jew-haters Corbyn has shaken hands with, but the super-organised alliances of hard Zionists who use their power to smear anyone who stands in their way.

So, not content with guarding Corbyn from questions about some of the people he’s hung out with, the Corbynites push prejudices of their own, resuscitating the ugly view that a certain section of society uses its considerable clout to hush criticism. “People who hate Israel aren’t prejudiced”, they say, before talking darkly of strange groups seeking to control the British politics.

A blood-stained Israeli flag at a pro-Palestinian protest.

Can these people hear themselves?

Meanwhile, much of the lefty Twittersphere – which normally hounds tweeters who refuse to denounce racists or sexists – formed a virtual ring of steel around Corbyn, lambasting anyone who questioned him. A Labour councillor tweeted that Corbyn is “anti State of Israel, not anti Jew”.

But maybe being utterly against Israel – not just critical of its policies but *against* it as an idea and entity – is itself a kind of prejudice?

To see much of the left sniffily write off criticisms of Corbyn as overblown, or sinister, confirms the left has a big anti-Semitism problem: it treats anti-Semitism as less bad than other prejudices.

Were a British politician to share a platform with a white nationalist or a crazy woman-hater, there’d be outrage. But it seems mixing with those who aren’t fond of Jews is okay, or excusable, less wicked somehow.

What’s behind this extraordinary double standard among those who pose as loathers of prejudice?

It springs from that phrase “anti State of Israel”. Sadly, today’s anti-Zionists are not as different from anti-Semities as they like to believe. What both sides share in common is an urge to find one thing in the world on to which they might pin the blame for every global, political and social problem.

The anti-Semite blames the Jew; the anti-Zionist blames Israel, seeing it and its Western backers as the cause of conflict, the sinister influencers of the media, and, as the Corbyn fuss makes clear, as aspiring controllers of the fate of British politics.

The left’s notable lack of genuine agitation over anti-Semitism springs from the fact that there is, however vaguely, a common link here. The modern left thinks dark forces control every aspect of our lives. So do anti-Semites.

The left can’t convincingly condemn anti-Semitism because, terrifyingly, it sees a little bit of itself in it.