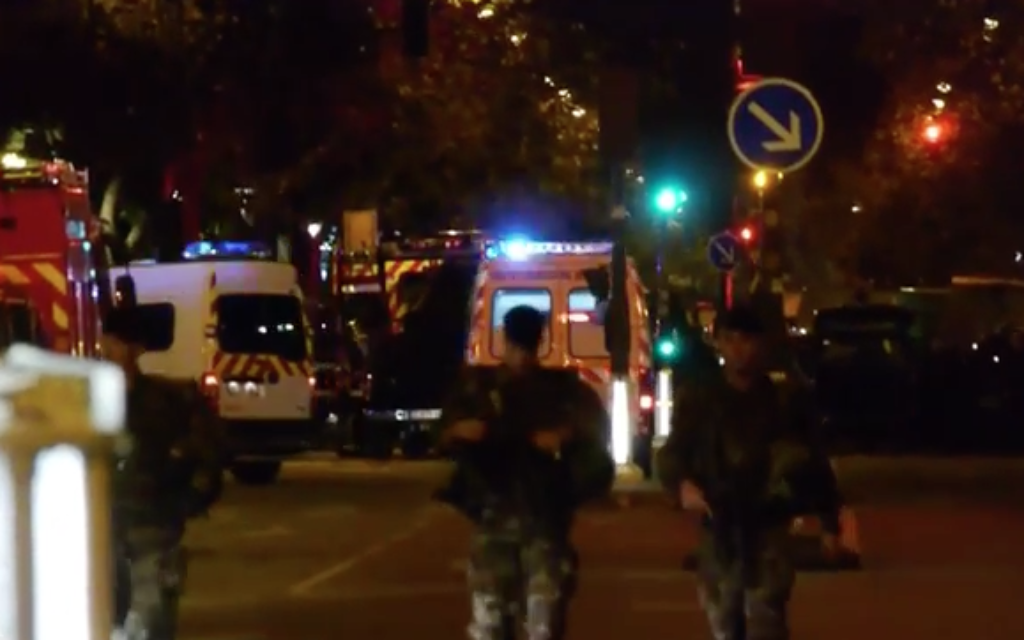 He organised the national commemoration service at France’s central synagogue for the 17 Charlie Hebdo staff, police and Jews murdered in January. I was there, together with Presidents Hollande and Sarkozy, and PM Netanyahu, and reported on it for Jewish News.

The mood then was of shock and surprise. This time is very different. All France feels targeted now, not just cartoonists and Jews. The whole country is resigned to its fate. When President Hollande declared this week that “France is at war,” he is saying what his people already know. But realism is what France needs now.  The UK also.

Most French Jews are at home on Friday night with family and friends, and so no reports of Jewish fatalities from the carnage this weekend have appeared. But Jewish medical staff attended the victims.  My friend Dr M doesn’t usually work on shabbat, but selflessly rushed to the Saint Antoine hospital to help the injured in the early hours of Saturday. She found the victims calm and  reconciled to terror attacks, seeing them as inevitable. Jews are less stoic – they know that “pogroms rarely come single, but in battalions,” to paraphrase Shakespeare.

Of the millions of easy targets for terrorists in France,  the jihadis’ main focus this time was the Bataclan theatre, where at least 89 were gunned down. Jihadis named it in 2011 as a future target because of its then-Jewish ownership.

Have no doubt it was chosen for that reason this time. ISIS hates Jews. Similarly, ISIS struck France’s national sports stadium because it loathes La République Francaise, a mighty beacon of secular values. Jews remain a top priority for ISIS, as they were for Hitler, and we need to note that.

Why then didn’t ISIS target Jewish institutions this time, as it did in January and  before? Because since the January attacks, synagogues and Jewish schools throughout France are now usually protected by soldiers.  Indeed one synagogue I attend (Chief Rabbi Sirat’s Centre Communautaire), has 16 soldiers based there (16!), who look after several synagogues in the area. Nonetheless, shabbat worshippers at the late Chief Rabbi Messas’ synagogue were startled recently to see a group of Arab youths sitting among them, lax security having enabled them to enter without checks. Security has been strengthened since .

President Hollande calls Islamic State’s mass-murderers by their Arabic name “Daesh”, to avoid using the word “Islamic.” He wishes to avoid revenge attacks on Muslims (Daesh is the Arabic acronym for ad-Dawlah al-Eslimiyya fil Iraq wa ash-Sham – the Islamic State in Iraq and Greater Syria). He wants to show sensitivity to the majority of French Muslims. Like us, they are entirely opposed to the slaughter, as are their co-religionists elsewhere. Indeed jihadis murder Muslims every day in Iraq and Syria, and in north Africa. Anouar Kbibech, leader of the French Islamic Council (CFCM), immediately condemned the murders and disowned the murderers. He also denounced any future scape-goating of his community. He did not know, but at least two Muslims with no connection to the murderers died in these attacks, as in January.

The right-wing Front National of Marine Le Pen is exploiting the bloodshed. She is ahead in polls for the 2017 presidential elections and, in contrast to M Hollande, has attributed the violence to “Islamist terrorism” and emphasised this is its sixth attack on French soil in 2015.  “Islamist fundamentalism must be destroyed,” she says. “France must outlaw Islamist organizations, close radical mosques and expel foreigners who preach hatred.”

What motivated ISIS’ attacks? Dr Mergui, President of the Consistoire, has no doubt. He tells me: “The murderers’ hatred of French values and of France’s anti-jihadi military strikes is the reason for these killings, just as with the January murders.” He is right. He has given the French government his full backing in its steps against ISIS, and his community commemorated the dead and prayed for the injured in a service in the central synagogue on Monday.

What lessons can we draw from this? British intelligence deserves our praise for thwarting dozens of similar attacks since 2005. David Cameron is totally justified in boosting resources for them this week. We must be constantly vigilant, and calm and cool at all times.

• Andrew M. Rosemarine runs an international law office specialising in commercial law, writes on France and MENA, and is a former Fellow of the Harry S.Truman Institute for Peace.