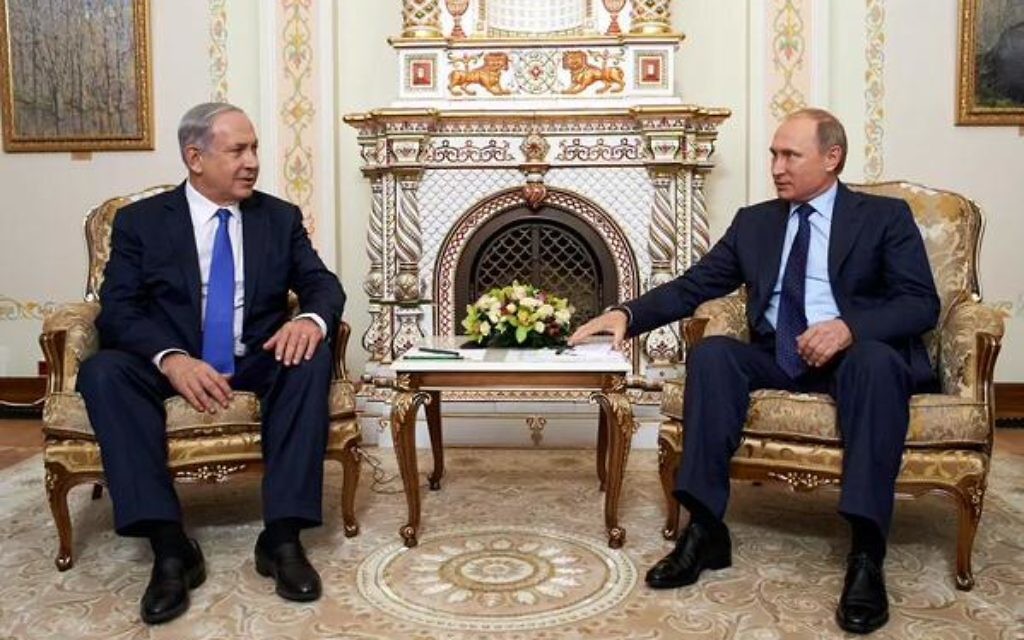 Benjamin Netanyahu and Vladimir Putin during a 2015 meeting

Israel’s complex relationship with the Kremlin is being tested severely by the changing landscape in Syria. In terms of personal relationships it has never been closer. The business oligarchs and entrepreneurs that are supportive of Vladimir Putin also are some of the biggest inward investors in Israel.

In Britain the Chelsea Football Club owner Roman Abramovich attracts headlines for his property antics in Kensington. In Israel he recently purchased a hotel in Tel Aviv’s fashionable Neve Tzedek neighbourhood for $25m with the reported aim of converting it into a private home.

Another Russian billionaire Valery Kogan, owner of Domodedovo airport in Moscow, is construction a vast £833m estate in Caesarea. At this time of the year, when the Jewish holidays come thick and fast, the sky over Tel Aviv’s Ben Gurion airport is black with private jets arriving from Moscow and other Russian cities. But the luxury private jets transporting the oligarchs back and forth to the Promised Land are not the only Russian aircraft arriving in the Middle East. In the last month Russia has deployed a further dozen S-24 Fencer and a dozen Frogfoot ground attack planes at an air base near Latakia, Syria.

The advanced attack planes and fighter jets, as well multiple air defence systems, are being stationed close to the ancestral home of President Bashar al-Assad, signalling Russia’s determination to establish a military outpost in the region. US military sources report that the planes are being protected by SA-22 surface-to-air missile anti-aircraft systems and Predator-like surveillance drones.

The latest stash of weaponry joins 15 Russian Hip transport and Hind attack helicopters already stationed at the Syrian base. If Russia were to decide to become involve in ground attacks it has on-hand nine T-90 tanks and some 500 marines on the ground. Not surprisingly, the Russian build-up has been watched by Israel with some trepidation. In spite of the close relationship between Putin and Netanyahu, Israel rightly has deep reservations about the Russian build-up to the north. Among the reasons that Assad has managed to hang-on to parts of his country, despite the assault from variety of Jihadist groups including the deadly Islamic State is the stout defences of Hezbollah militias, indirectly financed by Iran and armed by Russia.

In the earlier stages of the bloody Syrian conflict, the objective of the West was to bomb Assad out of office and install a civilian government in exile. But over the last 15-months as Islamic State has become more entrenched in Syria, Iraq, Libya and even the Sinai, the main objective of the West has been to eliminate Islamic state. Assad’s fate, for the moment, is secondary. Western objectives and those of Russia, that are so divergent in the Ukraine and the Baltics, are converging in Syria. After Britain’s party conferences David Cameron is widely expected to seek the approval of the Commons for extending the assault on Islamic State in Iraq to Syria, in effect aligning Britain with Assad and the Kremlin. France already has joined the battle.

The complicated alliances in the region formed the main background to Netanyahu’s pre-Yom Kippur visit to Moscow, where the Israeli leader voiced concerns that the advanced weaponry introduced by the Russians could aid Hezbollah.

Russian’s incursion will likely act as a constraint on Netanyahu. Israeli planes and artillery have not been inactive in Syria. Since 2013 they have struck several times to prevent the transfer of weapons to Hezbollah. The cyber-arrangements cooked up between Russia and Israel to co-ordinate military operations on the region will offer some assurance that accidental conflict can be avoided. But the reality is that an old Israel enemy, the Assad dynasty, now has Hezbollah, Iran and Russia onside. Israel’s freedom to defend its northern borders will be more constrained.

The Israeli-Russian relationship has been preserved along with the ability of Russia’s oligarchs, capital and scientists to work closely with Israeli counterparts. Old strategic uncertainties have been underlined. There’s been a shifting of the tectonic plates that is aligning Israel’s interests with the moderate Sunni Gulf countries.