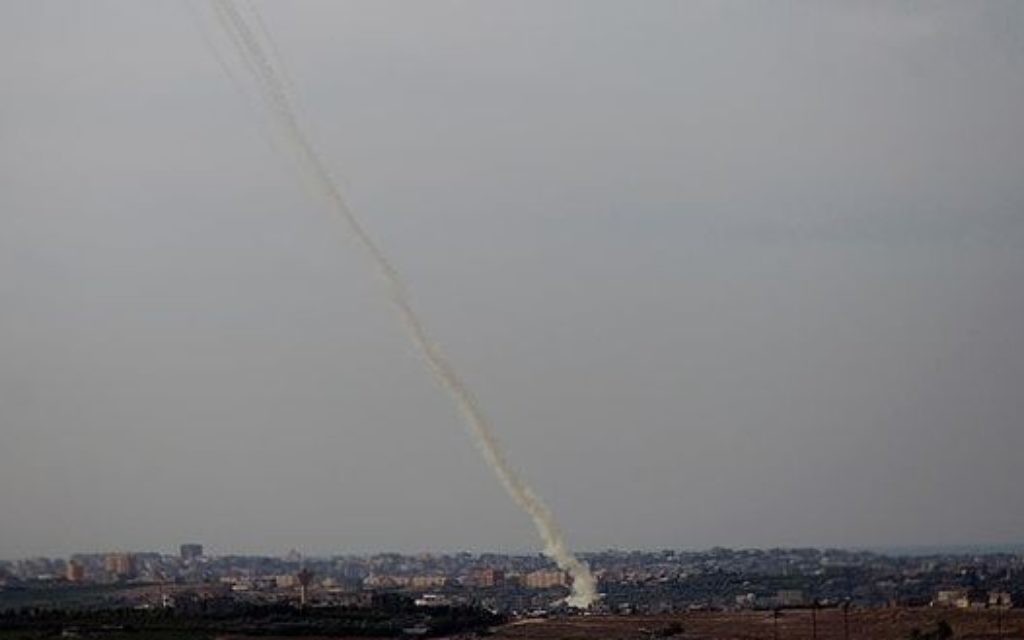 A rocket fired from Gaza during the 2014 conflict

The group consisted of former chiefs of staff, generals and political leaders from across Europe, America and Australia.

Their conclusion was that the various allegations made against Israel last summer had little merit. The country’s actions were legally and morally justified within the laws and principles of armed conflict.

The group acknowledged this was not a war Israel had sought. The Jewish state had acted with admirable restraint in the preceding months when Israeli civilians were being targeted by rockets from Gaza.

Israel sought a ceasefire with Hamas and when this was rebuffed, she acted in a legitimate way to deal with the threat from beyond her borders. The group was in no doubt that Hamas’ actions before and during the conflict were war crimes.

This included the firing of rockets at population centres, the targeting of Ben Gurion airport and the construction of tunnels designed for the abduction, murder and maiming of Israelis.

In addition, Hamas used its own civilians as human shields, compelling citizens to remain in their homes in contravention of international law, while also using UN facilities to store weapons.

The group noted that while armies are generally required to avoid non-combatant deaths in wartime, they were not aware of any army taking “such extensive measures as did the IDF last summer to protect the lives of the civilian population”.

The protective measures taken included phone calls, text messages and leaflet drops to Palestinians warning of impending attacks, as well as the detonation of harmless warning explosive charges (the “knock on the roof”).

These exceeded any requirement in the laws of armed conflict, and, at times, placed Israeli lives at risk. The pauses in fighting that Israel agreed to also allowed Hamas to regroup and replenish their supplies.

The military group did not ignore the difficult question of why so many civilians, over 1,000, died in the war. Some Palestinians were murdered by Hamas while other deaths were caused by simple human error. But the majority resulted from Israel “defending against an enemy that deliberately (carried) out attacks from within the civilian population”. They concluded that the “overwhelming majority” of deaths were therefore the responsibility of the terrorists and their backers, not Israel.

It is hard to believe that a single one of the 11 figures in this group has had the wool pulled over their eyes.

All have decades of experience in fighting war and understand the laws of armed conflict. Their conclusions drive a coach and horses through the conventional wisdom about last summer’s conflict.

They also contradict the findings of the McGowan Davis report, sponsored by the UN Human Rights Council, released earlier this week.

The UN report accuses both sides of possible multiple violations of international law. It acknowledges the “immense distress and disruption to Israeli civilians” caused by Hamas rockets but emphasises the widespread devastation in Gaza which it says was “unprecedented”.

It accuses Israel of a “large number of targeted attacks against residential buildings” which had a “dire impact on civilians” while also condemning the Hamas terror tunnels.

With its attempted even-handedness, this is clearly not a replica of the Goldstone report. But like that report, it does suggest that Israel is guilty of war crimes.

It is also characterised by moral equivalence, the failure to distinguish between a genocidal, terrorist group and a legitimate government acting in self defence.

The report is politicised in other ways. In explaining the context for the war, it decries “the absence of any progress on the political front”, and condemns Israel’s blockade of the strip for its “widespread and systematic violations of human rights”.

Absurdly, there is no mention of the Hamas Charter while settlements and occupation come in for scorching criticism.

This flawed report is naturally being publicised far and wide in the world media. In light of this, it is surely essential to promote the more credible findings of the high-level international military group.