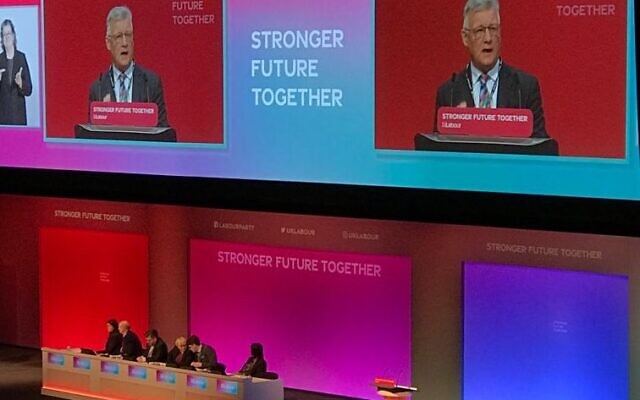 Labour Friends of Israel chair Steve McCabe has led the criticism of a “one-sided” Palestine motion passed by Labour Conference accusing Israel of committing an “on-going Nakba” and which failed to condemn  Hamas crimes at all.

Addressing delegates inside the Brighton Centre, McCabe said the Young Labour motion was “completely hostile to the people of Israel.”

Reminding the room that to buy a house in Israel also means you have to “build a bomb shelter” the LFI chair said after the motion was passed:: “This motion is completely unacceptable, grossly inaccurate and morally repugnant.

“It does not represent Labour’s longstanding policy in support of a two state solution, backs the toxic BDS movement which singles out the world’s only Jewish state, and propagates the apartheid smear.

“It will undermine the process of rebuilding Labour’s relationship with Britain’s Jews and with Israeli progressives who are fighting for peace, coexistence and reconciliation.

“This vote shows that there are still too many in the party who remain unhealthily obsessed with Israel. We must continue to work to restore our party’s proud tradition of support for Jewish self-determination and the State of Israel.”

Luke Akehurst, who sits on Labour’s NEC also condemned the motion saying: “Disgusting that mover of Palestine motion compared Israel to Franco and delegitimised Israel as “settler colonial”, a clear denial of Jewish self determination and possible breach of IHRA definition.”

The motion appeared to pass with a 2-1 majority following a show of hands in the arena.

There were cheers from some as it passed, but no sign of the Palestinian flag waving under Jeremy Corbyn

Labour MP Angela Eagle (Wallasey) had earlier called for delegates at the party conference to “manage their passions” in a foreign policy debate on Israel and Palestine.

Chairing the debate, she said: “I’d just like to say that clearly some of the matters to be discussed in this debate today are sensitive and I know many delegates will feel very passionate … I am sure that everyone, despite their passion, will remember to manage that.”

He said: “The motion before you today will not only send our uncompromising solidarity with the Palestinian people by calling for sanctions against the state that is practicing war crimes, it will bring us one step closer to finally ending the shameful century of British complicity and the denial of the right to self-determination, liberation and return.”

It represents a setback to Keir Starmer’s hopes of fully restoring relations with the majority of the Jewish community.