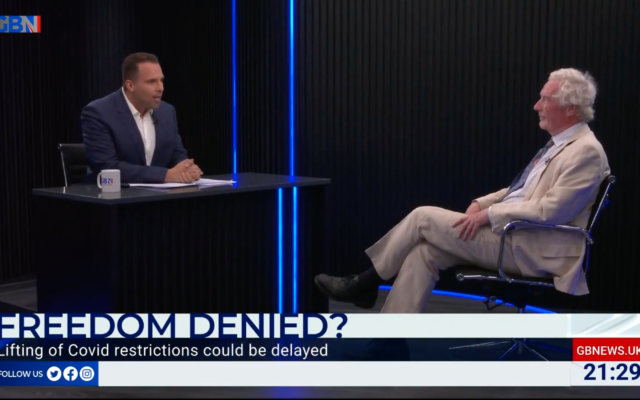 A retired Supreme Court judge has raised the “extreme example” of “Nazi race laws” during a debate about the morality of Covid-19 lockdown regulations on new TV news channel GB News.

In comments that went unchallenged by presenter Dan Wootton, Lord Sumption, a prominent critic of the government’s lockdown measures, said: “I think most people would accept there was no moral obligation for Germans to comply with the Nazi race laws.”

Sumption, who retired from the Supreme Court in 2018 at the age of 70, insisted he did “not begin to compare” the experience of Nazi Germany with the current situation in the pandemic.

But discussing lockdown restrictions he added: “To make it a criminal offence to associate with other human beings is a proudly wicked thing to do. ”

Again, he qualified his comments by suggesting he did not consider those in the current UK government to be “wicked men” but added the continued lockdown was a “wicked thing to do.”

She added the GB News interview will have been “upsetting to Jews who lost family in the Holocaust.”

Sumption’s comments, made on GB News first day of broadcast, were seized upon by hard-line anti-vaxx campaigners.

One You Tube channel, run by someone naming themselves liarpoliticians2, wrote of the interview :”Retired judge Lord Sumption attacks Nazi PM Boris Johnson and his never ending attacks on freedom and free speech, for his coronavirus covid19 PLANdemic… ”

Anti-lockdown protests in the UK and across the globe have been dogged by placards and speeches making comparisons between lockdown rules and Nazi Germany.

At a recent London demo anti-vaxx protesters wore Yellow Stars evoking those worn by Jews in the Nazi deaths camps, but with the word “Covid” or “Exempt” written on them.

The Community Security Trust (CST) have been amongst those to warn how anti-vaxx social media messages can become a gateway to more hardcore antisemitism and Holocaust denial.  And also how conspiracy theorists are undermining the systematic state-sponsored persecution and murder of six million Jews during the Second World War.

The comedian David Baddiel also criticised Sumption’s comments saying:”Lord Sumption is I believe thought of as a great brain.

“Unfortunately, anyone who compares any aspect of lockdown laws to the Nuremberg ones is an idiot. So that’s a quandary.”

The barrister Adam Wagner said his comments represented “the best case for his own argument that judges should not get involved in politics.”

On his own three-hour long show Wootton began with a lengthy rant against continuing coronavirus rules, before introducing guests including Sumption, Lord Sugar and Nigel Farage.

At one stage Lord Sugar remarked he had been asked a “stupid bloody question” when Wootton asked him if he would “take the knee” in the same way as the England football team.

Jewish News has approached GB News for comment on Sumption’s reference to “Nazi race laws” and on presenter Wootton’s failure to challenge him over the comment.