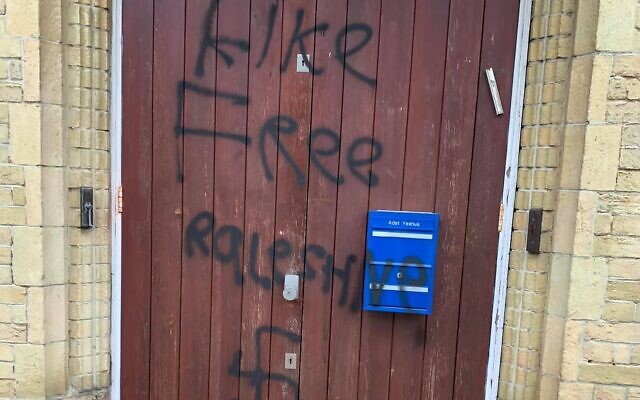 A Norwich building which is home to a messianic synagogue has been targeted with antisemitic graffiti including swastikas alongside the words ‘Free Palestine’.

The antisemitic grafffiti, which is being investigated by police, was discovered as the shul opened for prayers this morning.

Binyamin Sheldrake, from the insttution, told Jewish News he thought the worsening situation in the Middle East had emboldened antisemites to “jump on the bandwagon”.

“It’s horrible, it’s just people feeling they have permission to be antisemitic at the moment,” he said. “They get encouraged to step out and do stuff like this.

“We’re not in Golders Green, it’s not the kind of place where you would expect this kind of reaction.”

Officers at Norfolk Constabulary confirmed they were investigating the incident. Mr Sheldrake said CCTV had been taken and samples have been taken of the paint.

Council officials were scrubbing off the slurs from the synagogue door this afternoon. “Police were saying they regard it as a hate crime,” he said.

“The CST will be informed. Police were saying it’s probably an extreme left-wing group, not a right wing group because of ‘Free Palestine’ but that’s a shot in the dark.”

While members are shocked and appalled at the targeted abuse, Sheldrake said he was heartened by the reaction of the local community, which has condemned it.

“I’ve been encouraged by the reaction of the people around us. There was a group looking at it this morning, and they all said, ‘We’re so sorry.’

“There’s always some good in the world, we’ve got to look at it that way.”

It comes after the CST warned that antisemitic incidents had sharply surged by 250% in recent days, calling it “depressingly familiar and completely inexcusable.”