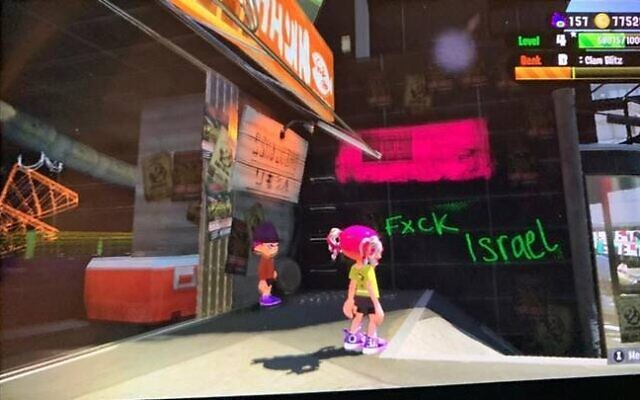 Nintendo has apologised after anti-Israeli graffiti appeared on a wall in the background of the popular Splatoon game.

The words “Fxxk Israel” appeared as a graffiti daubing on a background wall in the Nintendo Splatoon 2 game which revolves around “Inklings” firing ink and claiming territory.

After being alerted to the incident UK Lawyers for Israel (UKLFI) wrote to the Entertainment Software Ratings Board (ESRB) and Nintendo’s legal counsel, to demand that the offending graffiti would be removed.

The ESRB replied by advising that online-enabled games like Splatoon 2 permit players to interact in real-time with other players as well as add content of their own, such as text and/or voice chat, skins for characters or maps for background images.

The Online Rating Notice for such games reads “Online Interactions Not Rated by the ESRB.”

This is a warning to consumers, in particular parents, that other players may be able to add content that has not been considered in the ESRB rating assignment.

Rob Posgate, Legal Counsel to Nintendo UK added: “We can assure you that the anti-Israel graffiti that the child saw was not generated by Nintendo as part of the design of the game, Splatoon 2.

“We strongly condemn such statements, and the sentiments behind them.”

The Nintendo lawyer explained that Splatoon 2, like many video games, contains features for users to generate and display certain content.

The screenshot with the offending graffiti was from the waiting area which users’ characters arrive in before deciding which battle arena to join in order to play the game.

In that waiting area, users may generate and display content including by creating graffiti to be displayed on certain walls.

Posgate continued: “The vast majority of our users generate harmless and fun content.

“Unfortunately, a very small minority of users may from time to time use this functionality to post harmful and offensive messages.

“To protect our users from this abusive behaviour, we include a reporting functionality within the game.”

Caroline Turner, director of UKLFI commented: “If anyone else comes across inappropriate content in a video game, it is important to report this to the video game company, so that the offensive content can be removed as soon as possible, and the offenders can be barred from the game.

“We are pleased that Nintendo has highlighted the reporting function on their games.”