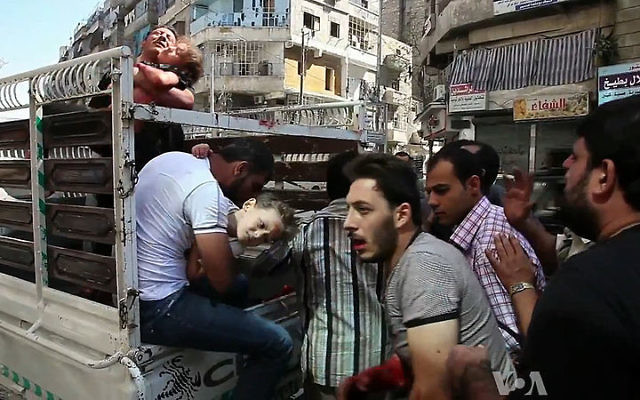 Wounded civilians arrive at a hospital in Aleppo during the Syrian civil war.

Israel’s prime minister has committed to helping wounded Syrian civilians, saying he wants to ‘bring them to Israel, to our hospitals’ to treat them.”

Benjamin Netanyahu said this week, that he is seeking to find ways of giving medical help to casualties of the Syrian civil war, particularly from the devastated city of Aleppo.

In a series of messages on Twitter, Netanyahu said: I’ve asked @IsraelMFA (Israel’s Ministry of Foreign Affairs) to seek ways to expand our medical assistance to civilian casualties of the Syrian tragedy, specifically in Aleppo”

“We’re prepared to take in wounded women and children and also non-combatant men. We’d like to bring them to Israel, to our hospitals.”

“As we’ve treated thousands of Syrian civilians. We’re looking into the ways of doing this.”

In recent months, Syrian and Russian air raids have destroyed buildings, hospitals and schools in the enclave – and reduced much of the eastern part of Aleppo to rubble.

This has left the residents with little choice but to flee, with Syrian activists claiming only around 3,000 people are left awaiting evacuation in the eastern part of the city.

The Syrian government is due to resume full control of the city after nearly six years of war.

The Lebanese militant group Hezbollah, who have fought Israel during both Lebanon wars, is fighting alongside Syrian president Bashar Assad’s forces. The terror group warned the remaining residents in the rebel enclave on Tuesday to leave “as quickly as possible”.

This news comes after Russia’s ambassador to Turkey was assassinated in Ankara on Monday. He was murdered by a policeman who shouted: “Don’t forget Aleppo! Don’t forget Syria!”

PM: I've asked @IsraelMFA to seek ways to expand our medical assistance to civilian casualties of the Syrian tragedy, specifically in Aleppo