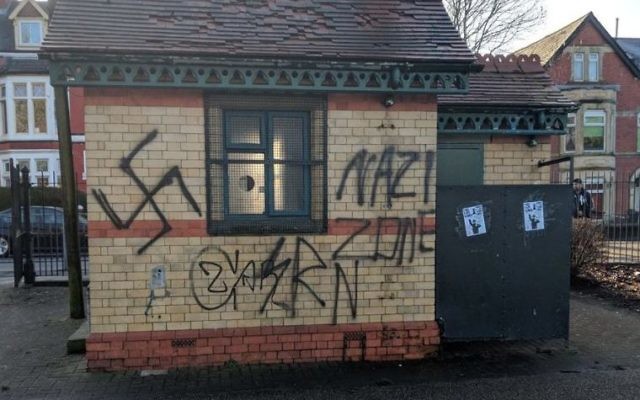 Swastika and 'Nazi Zone' daubed on a building in Grangetown Credit: @GregPycroft on Twitter

Swastikas and Nazi slogans daubed on buildings around Cardiff was condemned by the local MP as ‘sick and disgusting’.

A parent in the Grangetown area of the Welsh capital noticed offensive graffiti during Friday’s school run, and alerted authorities who have since cleaned it away.

Swastikas were spray-painted onto the walls of the Grange Conservative club and onto a smaller brick building that stands empty, but prominently, in Grange Gardens.

In addition to swastikas, the phrase “Nazi zone” was daubed alongside posters depicting a man in a balaclava doing a Nazi salute, warning about “P**i rape gangs coming to your town”, telling people to “protect your children from degenerate scum. The posters says “you are the resistance”, and includes a lion emblazoned onto a Union Jack.

Greg Pycroft, who noticed the offensive symbols while taking his young children to school told Jewish News: “It’s always been a culturally diverse part of the city and one of the most diverse parts of Wales. I’ve lived here for the past decade, and this is the first time I’ve seen this kind of hatred, so in that sense it’s shocking and I’m sorry so many kids would have been exposed to it on their way to school this morning.”

After telling the council about the graffiti, it was removed on Friday. Pycroft added, “the positive reaction to it from the local community, city council and police has been reassuring. It’s all been removed, meaning kids won’t have to see it on their way home from school.”

Sad, sorry sight on the school run in and around Grange Gardens @grangecardiff. Hopefully @cardiffcouncil will be able to remove everything before kids head home this afternoon. pic.twitter.com/UNUDNlZt8k

Mr Pycroft tweeted photographs of the graffiti, describing it as a “sad, sorry sight” and said he hoped it could be removed by Cardiff Council before the end of the school day.

Cardiff Council said it condemned all graffiti “in the strongest possible terms” and was working with South Wales Police on the matter.

A spokeswoman said: “The offensive graffiti and flyposting will be removed as quickly as possible.”

Meanwhile Chief Inspector Joe Jones, head of communities and partnerships at Cardiff Bay police station, said there would be a full investigation into the crime “with every intention of arresting and prosecuting the perpetrators”.

He said CCTV and house-to-house inquiries were under way, while the posters would be sent for forensic examination.

“Cardiff is a modern, vibrant and safe multi-cultural city where people of different religions, faiths and cultures live side by side in peaceful harmony and have done for many, many years,” he said.

“The vandalism of public buildings with such abhorrent racist graffiti is totally unacceptable criminal behaviour and it will not be tolerated.

“The offensive graffiti is in the process of being removed and there will be a full investigation into this crime.”

He urged anyone who had information about the incident to call the police on 101 or contact Crimestoppers anonymously on 0800 555111.