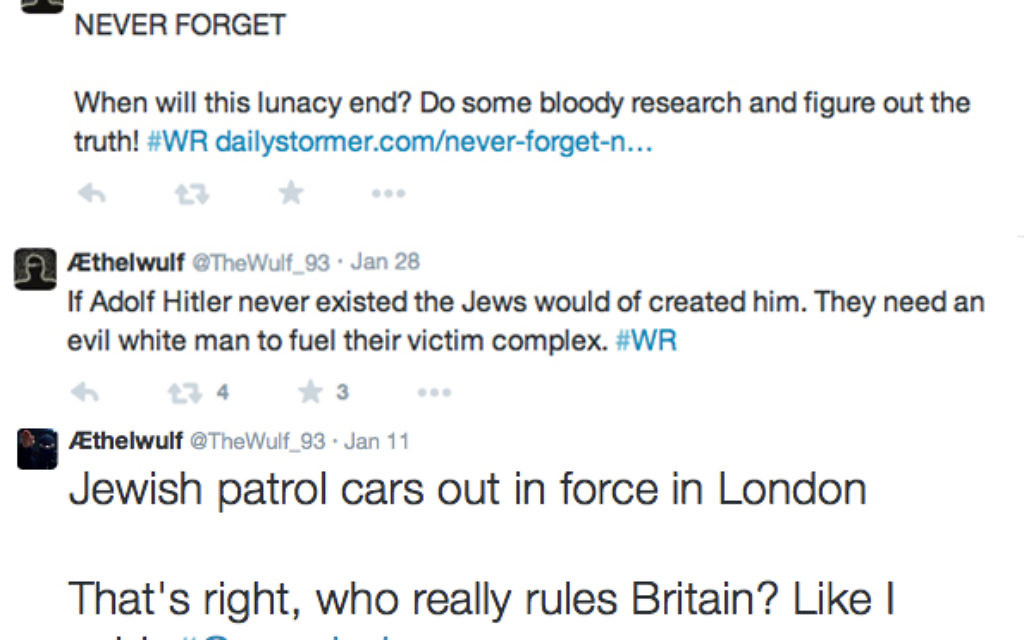 This week, the shadow home secretary demanded to know what Twitter is “playing at” after the neo-Nazi, that has previously been jailed for abusing Luciana Berger continued to use the site to spew anti-Semitism and trivialise the Holocaust.

Garron Helm was sentenced to four weeks behind bars in October over a tweet showing a Holocaust-era yellow star superimposed on the Liverpool Wavertree MP’s forehead. The message carried the hashtag ‘Hitler was right’.

But in the past two weeks alone, a torrent of hateful messages targeting the community or politicians standing up for British Jewry have been sent from the same Twitter account from which Helm abused Berger.

On Holocaust Memorial Day, one tweet, reacting to a news story about the millions who perished in the Holocaust, said: “From 4 to 6, now it’s 11! Lol.”

The following day another said: “If Adolf Hitler never existed the Jews would of created him. They need an evil white man to fuel their victim complex.”

He also tweeted “burrrrn lol” after Ed Miliband tweeted his Jewish News article marking the 70th anniversary of the liberation of Auschwitz.

Turning his hate towards Shomrim, another tweet said: “Jewish patrol cars out in force in London. That’s right, who really rules Britain? Like I said,#Occupied.” The account also refers to “western Jews-media” and claimed Jews were “actively working to genocide my people”.

After Jewish News brought the continued abuse to her attention, shadow home secretary Yvette Copper said: “This is appalling anti-Semitic abuse. This man has been convicted once of using Twitter’s platforms to commit crimes – threatening, harassing and promoting racist abuse.

“Why on earth does Twitter’s policy allow him back on to do the same thing all over again? What are Twitter playing at? This is not about freedom of speech, this is hate crime. Twitter should take some responsibility and get it stopped.”

Helm said this week, in an interview with a far-right publication, that he was “not sorry in the slightest” for his campaign of hate.

Berger, the shadow public health minister, told the Jewish News she was “deeply saddened” to discover the account was still fully operational. “It is very concerning to see so many racist and anti-Semitic tweets continue to be published from this account.”

She added: “Twitter recognises the importance of keeping some people from using Twitter by the fact they close some accounts. However phone verification is required for new profiles to be set up which means accounts can still be started from IP addresses where offending accounts have been registered. It’s unclear what Twitter’s exact policies are which mean some accounts are still allowed to broadcast messages of hate, even after that person has gone to prison for it.”

The MP was bombarded with hundreds of anti-Semitic messages a day at the height of an orchestrated international campaign following Helm’s jailing – and continues to face abuse “daily”. One account – @lucianadead – was taken down in recent days after being reported to the microblogging site.

But police have told Berger that Twitter “is taking too long” to respond to some requests for information about accounts of concern, she said.

Turning to the wider problem of abuse on social media, she added: “People are using Twitter as a platform to commit crimes every day under English law and Twitter needs to do more to be part of the solution. What happens on Twitter has serious real life consequences. Lack of resource is no defence from social media companies and they should be held more accountable.”

“We are working with senior representatives from leading social media companies, the police and community groups to look at ways to address online hate crime, and changes to the law will increase the maximum penalty for offences under the Malicious Communications Act 1988 to two years imprisonment.”

Following a meeting organised by the All-Party Parliamentary Group against Anti-Semitism last year, MPs accused Twitter of a “defensive” response to concerns about rising online hate. “They likened the tweets to hearing an offensive conversation in the street, meaning that it’s soon gone as you pass by,” said Hendon MP Offord at the time.