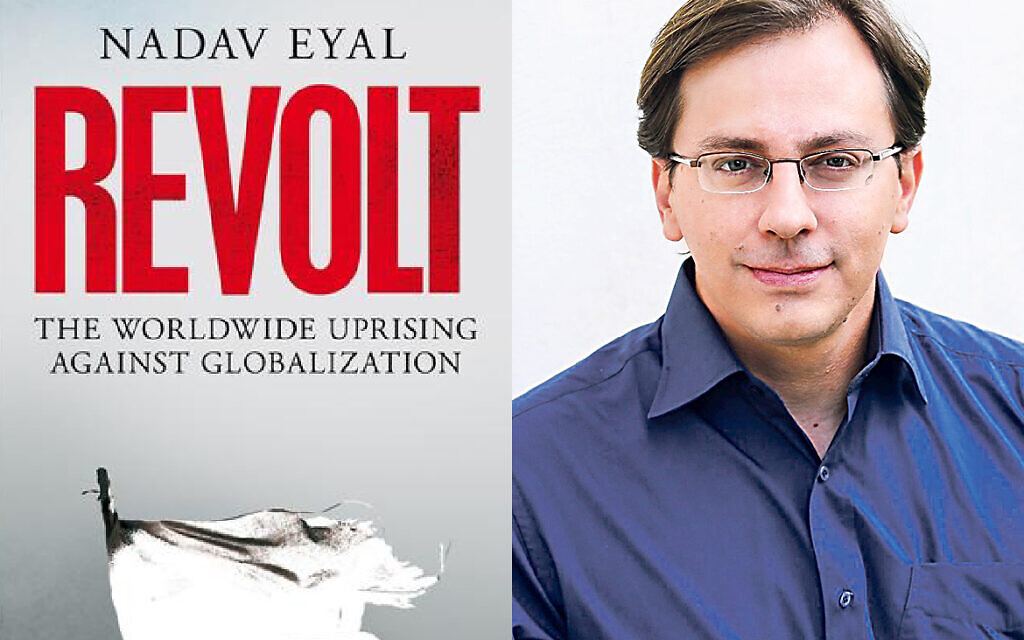 There is a roaring “revolt” worldwide against forces of progress, and leaders are bumbling in their response, an Israeli journalist claims in an influential book that has been newly-translated into English.

Nadav Eyal’s Revolt has caught the attention of some of the world’s most influential thinkers, including former US President Bill Clinton. “The message is clear,” he wrote, echoing its call to spread benefits more equally and build a global community capable of “confronting our collective challenges together”.

Eyal told Jewish News that he is excited by the impact the book is having and said its thesis formed in his head over a few years, starting with the global economic crash of 2008, which he covered for Israeli media from London.

He recounts meeting Nick Griffin, then head of the British National Party, who said that the world order was about to be shaken, and only later realising how how right the prediction of this “bigot” had been.

“The main point of the book is to say that if you don’t respond to this sense of revolt, others will harness it and use it to destroy what progress has achieved,” he said. “Wake up guys.”

Eyal, senior columnist for the daily newspaper Yediot Achronot and commentator for Channel 13, focuses mainly on globalisation, which he writes has “bettered the human condition, but it has also decimated communities and ravaged ecosystems, sowing the seeds of insurrection”.

People who assess that they have a raw deal from globalisation are raging against it, often calling to throw out the baby with the bath water, he states.

Citing interviews he conducted, Eyal depicts this anti-globalisation lobby as
a disparate collection of individuals and ideologies, driven by a sense they have been left behind as others advanced economically, or because the Western values it makes dominant clash with their own tradition.

They range from Griffin, who told him gleefully as the economic crisis took hold that “the wheels of the capitalist system have fallen off”, predicting “a crisis that will last for generations”, to Islamic fundamentalists and anti-science anti-vaxx Americans.

Eyal views Donald Trump as exploiting the “economic and cultural of grievances of those disillusioned by the American dream”. The anger that drove some Brexiteers is also part of the narrative he presents.
But these are far from the entire story.

“The rise of populism and nationalism, from Brazil to Italy to Hungary, constitutes an attack, albeit diffused, on today’s globalisation,” Eyal writes, claiming that it grows “out of an echo chamber of injustices that have plagued the middle class throughout the industrialised world”.

The “revolt” is “unorchestrated, and fluid,” and “it is more about the rejection of current power structures than about the fine details of building new ones”.

In an interview about the book, Eyal said the challenge of world leaders is to empathise with those who are frustrated, and avoid them falling in to the grip of radicals and extremists.

“I have empathy and understanding towards people who feel their lives have been unhinged and turned upside down by changes they cannot control,” he stated. “This could be coal miners losing jobs in Pennsylvania and blaming national gas, or those who feel their national or cultural identities are threatened.

“I feel empathy with these people, though I am concerned that their grievances are being exploited by extremists, radicals, anti-vaxxers, [those
who are] anti-science and others.

“These people are trying to exploit them in their push for a new order that is, at its core, anti-liberal and anti-democratic.”

Eyal argues that many of the grievances are avoidable if power structures, which haven’t been updated to cope with a globalised world, are caught up in today’s challenges.

One example is realising that redundancies as a result of technological advancements are inevitable, and making changes to corporate tax systems so they provide budget support for people who lose their jobs because of innovations. Another is stronger international bodies, including criminal courts and the World Health Organisation, which he says was shown during the pandemic to lack the strength it needs.

“Experts and the scientists who deal with the way our world and our order is built understand we need changes, whether a global tax regime or a unified response to climate change, But the politicians we have don’t deliver agreement on the issues.

“The world is moving really quickly and has huge challenges, but it’s stuck with the political cultures of the late 19th century.”