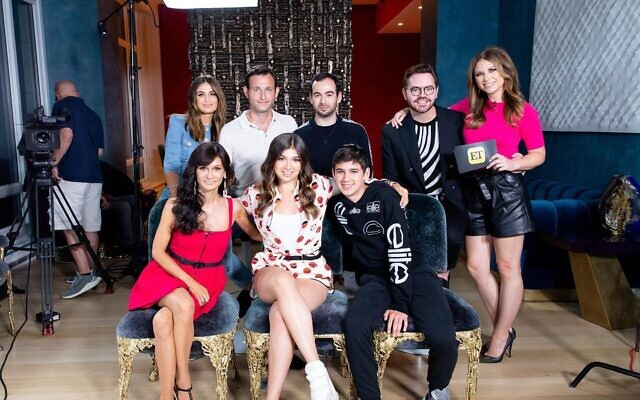 Julia Haart and her family, including two daughters, two sons and husband Silvio

Fans of Netflix’s “My Unorthodox Life” started buzzing late Wednesday when Ben Weinstein, the husband of the star’s daughter, posted a picture of himself to Instagram with an intriguing caption: “Officially not-famous.”

Was Weinstein signalling that he had split from Batsheva Haart, the influencer and daughter of fashion executive Julia Haart whose journey out of Orthodoxy was the subject of the hit series this summer?

His followers seemed to think so, cheering him on in comments. “Ben is freeeeeee!!!!!!” one of the hundreds of people who commented on his picture wrote.

Social media sleuths found clues in the fact that Haart and Weinstein had deleted pictures of each other from their feed. Weinstein had also begun posting daily outfits from a seemingly sparse closet, and Haart’s most recent videos appeared to be filmed in her mother’s apartment.

On Thursday evening, Weinstein and Haart confirmed the speculation, with a joint statement that reiterated a theme of the show: that their marriage at a young age — they were 19 when they tied the knot in 2012 — had been a strain.

“After time and consideration we have made the decision to separate,” they wrote in their Instagram stories. “We have so much love and respect for each other but have realised that it is time to take time space to ensure that each of us live the most joyous, fulfilling lives possible.”

They added, “There are no secrets nor salacious events to blame. We are just two best friends who met a very young age and have grown over the past 9 years each in our own way.”

Haart and Weinstein were raised in the Orthodox community of Monsey, New York, where couples typically marry shortly after high school. Their traditional wedding took place just weeks before Julia Haart left the community and shed her Orthodox practices. Over time, Haart and Weinstein, along with two of Haart’s three siblings, accompanied their mother into her new life in Manhattan, where her career and marriage thrust them into the world of the rich and Instagram-famous — and, this year, turned them into the stars of “My Unorthodox Life.”

In a YouTube Q&A in August, the first question the pair answered was whether they regretted getting married when they did.

“I never like to say I regret anything in my life, but circumstances happened again, I definitely would not get married so young,” Haart said. “Getting married at 19 was way too young and I would not want our kids to do that. But thank God we found each other and we have a real friendship and that’s what kept us going.”

Later, Haart mentions that their 10-year anniversary is approaching (it was Oct. 17) and says she had toyed with the idea of having a vow-renewal ceremony but discarded it. “So many people get divorced after renewing their vows, I feel like it’s bad luck,” she said. “So I just want to have a really fun anniversary party.”

Turning to Weinstein, she says, “Just giving you a head’s up!”

The show documented that journey — and the tensions that lingered both between the family and the community they left behind, and between Batsheva Haart and Weinstein as they figure out how they will live going forward. In an early scene, Weinstein and Haart spar over whether she should wear pants, something that would have been forbidden in Monsey.

Later, it becomes clear that they are not on the same page about having children, something that they likely would have done already had they remained on the course set in their childhoods. (Their difference of opinion on when to begin having babies also comes up in the August video.)

But the show also captures them in tender conversation and presenting a united front against Julia Haart when she pressures them to spurn Orthodox practices more rapidly. In one episode, Weinstein orchestrates a family dance for Haart to post on Instagram, in an apparent act of support for her chosen career.

“My Unorthodox Life” has been renewed for a second season, and it’s not clear how Weinstein and Haart’s split will figure into filming. For now, the pair is asking for support from their combined half a million Instagram followers.

“We so appreciate your continuous support as we embark upon this new chapter of our lives, separately,” they wrote, before sandwiching their names between a pair of heart emoji.