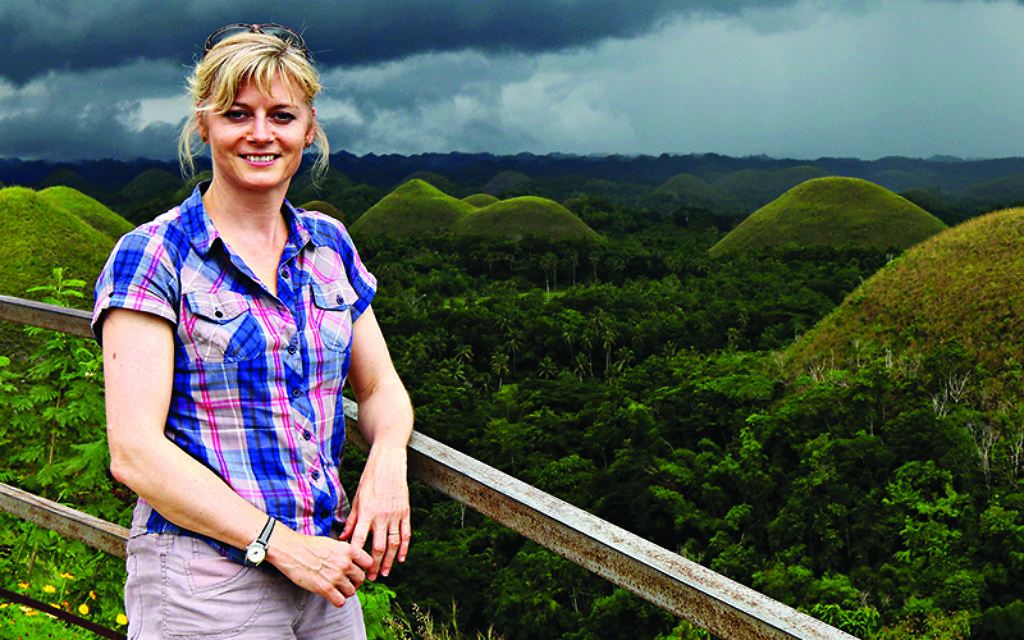 Karen Bowerman against the backdrop of the Chocolate Hills in Bohol

Alternately drenched and dishevelled then rested and rejuvenated, Karen Bowerman takes time out to explore a few of the 7,000 or so parcels of land that make up the remote, exotic and fascinating country of the Philippines

Karen Bowerman against the backdrop of the Chocolate Hills in Bohol

If the marketing men think “it’s more fun in the Philippines”, they obviously haven’t been stand-up paddle-boarding in pelting rain on the Loboc River.

That’s what I’m thinking as, drenched and dishevelled, I spot tourists gathering on the bank in the belief, it seems, that my predicament might make a good photo.

The rain ricochets off the river; I note the paparazzi are in the dry. I brave it out, and, at the risk of a wobble, wave and smile. A man fires off a volley of shots then waves and smiles back. Such is my introduction to Bohol, ‘the Island of Friendship,’ in the Philippines.

The Philippines is an archipelago of approximately 7,000 isles to the south and east of mainland Asia. It’s known for its white-sand beaches, clear water and dive sites, but Bohol also has heritage and culture.

The island and its tiny neighbour, Panglao – the two are linked by a bridge – are in the central Visayas region, just over an hour’s flight from the capital, Manila, in the north. Visitors can sunbathe, sightsee – and even do the stand-up paddle-board.

the white sands and sunshades of lona Beach on Panglao Island

As the sky clears, my instructor, Troy, and I paddle through dripping rainforest to the small Busay Falls. Clearings reveal patterned huts woven from banana leaves. A man fishing for tilapia drops a line from a bamboo pontoon. There’s the smell of meat cooking on hot coals.

A coconut plops suddenly into the water; I jump and make a joke about crocodiles. “There aren’t crocodiles but there are iguana,” Troy says, sounding excited. He tells me they taste like chicken but are tricky to catch.

But it’s another form of wildlife for which Bohol is known; it’s the Philippine tarsier, said to have been the inspiration for the character of Yoda in Star Wars.

The nocturnal, fist-sized creature is among the smallest primates in the world. Its eyes cover three quarters of its head and it has an exceptionally long ‘middle finger’ or tarsus bone, hence its name.

I creep through a forest protected by the Philippine Tarsier and Wildlife Sanctuary near Corella. Amazingly, I’m in luck; clinging with its sucker-tipped hands to a narrow branch, I spot a shy fellow snoozing. It opens its goggle eyes and almost seems to smile.

From Corella, I head to Carmen, in the centre of the island, for something equally odd – Bohol’s Chocolate Hills. There are about 1,000 of these conical, 40m mounds, named because when vegetation dies back from November to April they resemble giant chocolate drops.

the relaxing setting of Huma Island Resort and Spa

I visit during the May-to-October wet season, when everything is green. But it’s all still pretty dramatic, as the hills seem to glow under a brooding sky.

Geologists believe the landscape was formed from marine coral deposits, sculpted over the centuries by erosion. Locals prefer legends. One focuses on a giant who fell in love with a mortal and, in grabbing her from her lover on her wedding day, squashed and killed her in his palm. The hills are his calcified tears.

I make my way back to Alona beach on Panglao’s south-west coast, where bars and seafood shacks hug the shore. Bangka, or outrigger canoes with tarpaulins straddle the sea like giant waterboatmen. The next day, I wake early and go for a dip; the water’s ridiculously warm, which is natural since the Philippines is hot, humid and tropical.

Even in the wet season, torrential downpours fail to clear the air and although I enjoy island-hopping, sightseeing is a sweaty business, especially in Manila.

The capital’s traffic is notorious. Roads are regularly gridlocked, but the super-polished, chrome jeepneys, packed with passengers and daubed with slogans, are a travel highlight. It costs just eight pesos (11p) for a journey of four kilometres.

The original jeepneys were refurbished US military Jeeps left behind by the Americans after the Second World War. Locals converted them into buses and decorated them with spiritual slogans and graffiti-style art. Modern Jeepneys are now produced with surplus engines and parts coming from Japan. The decorations are entertaining – ‘God is the answer’, one vehicle claims. ‘In God’s speed’, declares another. But my favourite is ‘Thou shalt not kill’ – always worth remembering when you hit the road.

I catch up with a local guide, Angelo Alon, for a tour of Intramuros, Manila’s historic quarter, built by the Spanish, destroyed in the Second World War but since restored with the old citadel, Fort Santiago, forming the centrepiece.

The sunset from Huma Island resort and spa.

Inside the walls, topped with watch towers, is a monument to Jose Rizal, doctor, writer and national hero executed in 1896 for rebellion after an anti-colonial revolution inspired partly by his writing.

Manila is also home to a tiny Jewish population (roughly 70 families) and the country’s only synagogue, Beth Yaakov, located in Makati City.

Jews have been arriving in the Philippines since the Spanish Inquisition in the 16th century, but the community experienced a population explosion during the Second World War of around 2,500 members, mostly refugees from Europe, of which the secularly-minded Manila community was instrumental in helping to rescue 1,300 between 1937 and 1941.

From Manila, it’s a short flight south-west to Busuanga in the island province of Palawan, for a relaxing end to my stay. I catch a boat to the privately-owned Dicilingan Island, occupied solely by the Huma Island Resort and Spa. I’m welcomed with garlands and song, and dine on locally-caught lapu lapu and cassava cake made from a grated root vegetable, eggs and coconut milk.

Then it’s off to my over-water villa and outdoor Jacuzzi, from where I can spy the setting sun and say a fond farewell to the Philippines.

Karen was a guest of Hayes & Jarvis, which offers a seven-night trip to Manila, Bohol and Palawan from £1,899pp, including B&B accommodation, tours, internal flights and transfers and flights from London Heathrow with Philippine Airlines.