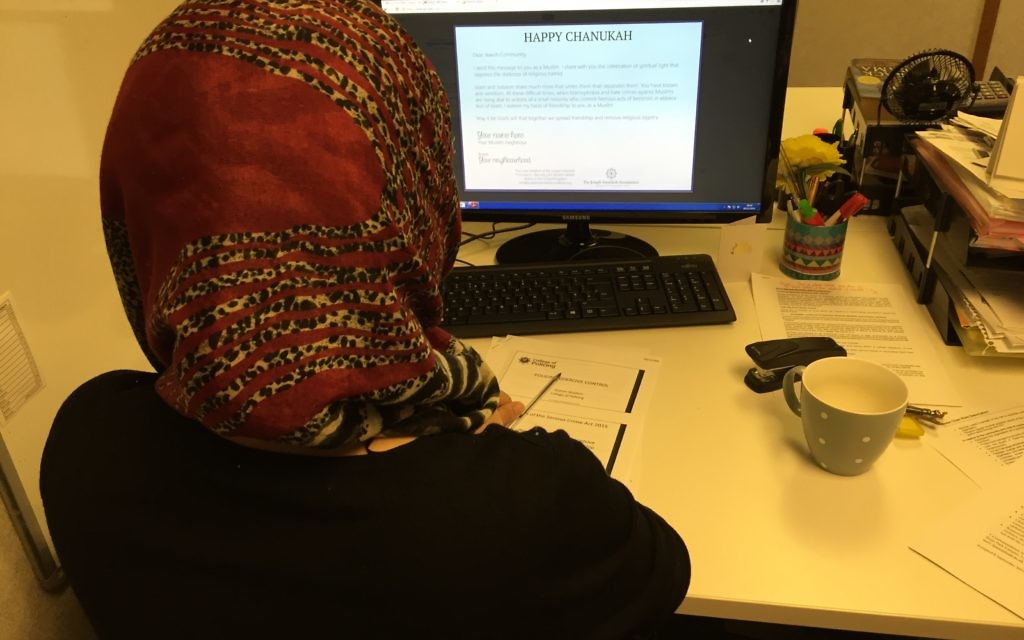 Faith leaders have heralded an interfaith project which will see over 200 cards sent from Muslims to Jews this Chanukah.

The ‘Extending Hand of Friendship‘ project seeks to build stronger ties between British Jews and Muslims, in an initiative of the Joseph Interfaith Foundation.

The letter says the “aim of this initiative is to give the chance to individual Muslims who want to extend their hand of friendship towards the Jewish community through a safe forum.. we offered them the chance to do this online either giving their name or anonymously as a well-wishing Muslim neighbor.

We were overwhelmed by their response, which means we had to send 200 cards when the initial aim was 100.

The synagogues were chosen by the Foundation; the Muslim donors do not know which synagogue their card goes to.”

Mehri Niknam, Executive Director of the foundation said: “We were overwhelmed by their response, which means we had to send more than one card to each synagogue.

She continued by saying this initiative was the first of its kind, and “we are going to continue this. Next it will be reciprocated to Muslims by the Jewish community we hope.”

It was “not a community approach, but an individual approach, stretching hand of friendship to Jewish community.”

The letter that will be sent to synagogues

Letters, which will be delivered first class, have been organised online , with individual Muslims requesting for a card to be sent to synagogue for £3, which covers printing.

Dayan Ivan Binstock senior rabbi of St John’s Wood United synagogue, Dayan of the Bet Din and a member of the Foundation’s National Council of Imams and Rabbis said: “This initiative is much welcomed. We deeply appreciate the gesture of our Muslim friends, particularly at this time. May our efforts to promote understanding and tolerance be granted success.”

There has been a positive response to the initiative from across the Jewish community, with Rabbi Alexandra Wright, adding: “In the current climate of fear and uncertainty, it is of crucial importance for Jews to extend the hand of friendship to Muslims and Muslims to Jews.  We share so much, not least a deep faith in a compassionate and just God and a passionate desire for justice and peace in the world.”

Rabbi Jonathan Wittenberg, senior rabbi of Masorti movement, said: “This is a gentle and wonderful way to bring light and friendship into the world on the Festival of Lights.May such light guide us in working for deeper understanding and peace. I would like to thank all the Muslim who have sent such cards.”

Judge Khurshid Drabu , a Muslim trustee of the interfaith foundation said: “In the present challenging circumstances that we as Muslims are going through, I believe it is incumbent on each of us to do whatever little we can do to build relationships and good will in the society at large. I fully support this excellent initiative.”

A Muslim project co-ordinator said: “This initiative is not an apology or condemnation – it’s an invite to friendship!  The British Muslim community are impeded by a continual expectation to explain what we are NOT about; these cards are a micro-opportunity to show what we ARE about. Our faith has more to unite people than divide.”