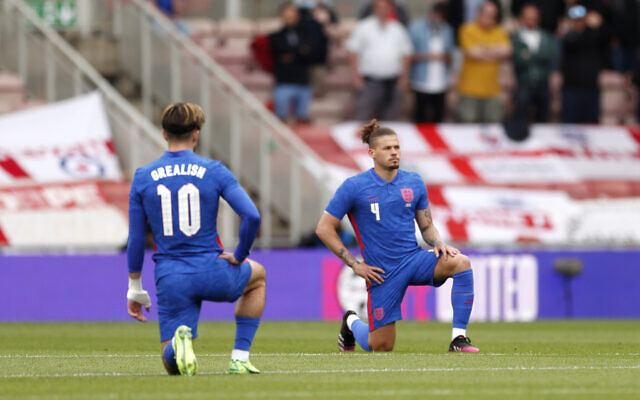 A Conservative MP has compared the decision by England’s footballers to “take the knee” in support of Black Lives Matter at the Euro 2021 tournament to that of those who performed the Nazi salute in a 1938 match against Germany in Berlin.

The comments come after England manager Gareth Southgate backed his players over their decision take the knee throughout the Euro 2021 football tournament.

Danny Stone, director of the Antisemitism Policy Trust, led calls for the Tory Party to “take action” against Brendan Clarke-Smith, the MP for Bassetlaw, over his Nazi salute comparison on Monday.

In a Facebook post Clarke-Smith wrote:” Following the 1936 Berlin Olympics being used as a propaganda exercise and under a great deal of pressure from both the FA and Britain’s ambassador at the time, the players were encouraged to join the hosts in making the Nazi salute prior to the match.

“Reluctantly, they agreed and for many years since it has been a great source of shame for many of those involved, including the Football Association…

“The point here is that regardless of the original intention, the mixing of politics and football had disastrous consequences…”Stone condemned the comparison on Monday tweeting: “This is an ill-considered and offensive comparison, which taken together with the additional comments demonstrate an urgent requirement for education. “I hope the party will take action.”

Clarke-Smith later claimed the “main point” he was trying to make was that “we should be keeping politics and football separate.”

In 1938 during a match in Berlin the England team were instructed to perform the Nazi salute during the German national anthem.The image provoked anger, with the legendary player Stanley Matthews writing “the dressing room erupted … all the England players were livid and totally opposed to this” and that he felt shame whenever he saw “that infamous picture”.

Elsewhere in his Facebook rant Clarke-Smith described Black Lives Matter as a movement with “quite sinister motives”, including “crushing capitalism, defunding the police, destroying the nuclear family and attacking Israel.”

The Bassetlaw MP’s comments followed an earlier attempt to criticise the England team, and Southgate’s decision to take the knee ahead of the side’s fixtures in the forthcoming Euros by the MP Lee Anderson.The Tory MP for Mansfield claimed he would be boycotting the games in protest at the decision to take the knee “while they are supporting a political movement whose core principles aim is to undermine our way of life.”

Anderson has previously apologised for comments he made ahead of the 2019 General Election during an investigation into antisemitism claims.He has been backed by Jonathan Gullis, the Tory MP for Stoke-on-Trent North. Gullis, 31, said Black Lives Matter was “a Marxist organisation that wants to abolish the nuclear family and defund the police”.