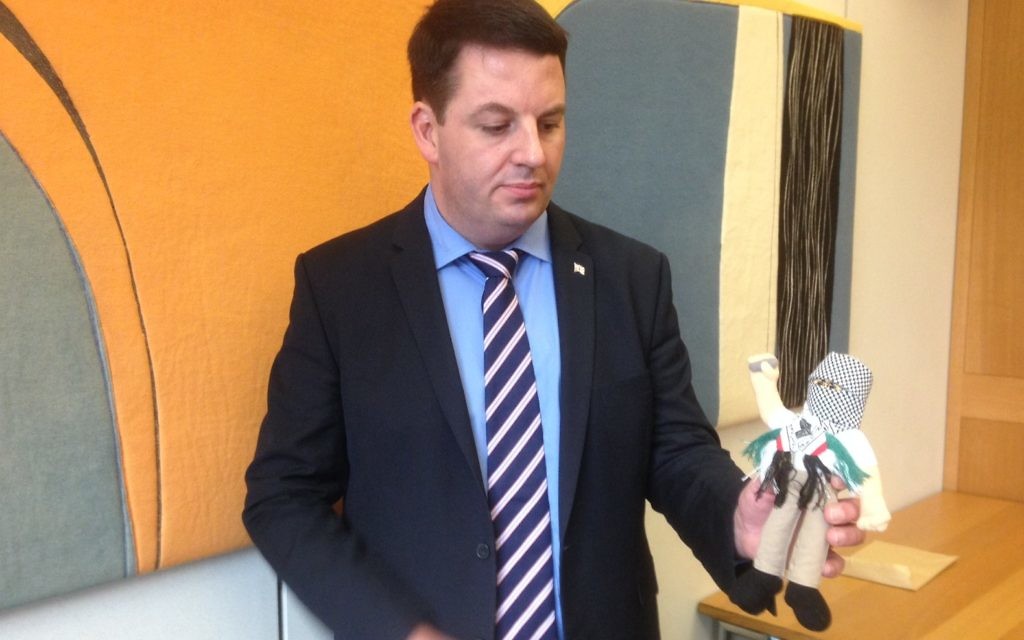 “Imagine if this were an Isis doll”, said MP Andrew Percy, brandishing one of 4,000 “terror dolls” seized by Israeli authorities in December, en route from the United Arab Emirates to the Palestinian Territories, writes Jenni Frazer.

Mr Percy, Conservative MP for Brigg and Goole, had just finished speaking in a Westminster Hall debate in Parliament, called by the Labour MP Sarah Champion to draw attention to the situation of children arrested by Israeli forces after violent incidents in the West Bank.

In a meeting with Jewish News after the debate, Mr Percy, a former teacher, said that the problem was a refusal by anti-Israel MPs to view the issue in context. “I taught plenty of young people who found themselves in the criminal justice system,” he said. “But we needed to find out why they were turning to crime and the same goes for what is happening in Israel.

The doll, about 10 inches tall, wears a keffiyeh covering its face, on which is written in Arabic “Jerusalem is ours”. Clutched in the doll’s right hand is a rock. “This is clearly incitement”, Mr Percy told JN, “but when it was raised in the debate – together with concerns about statements by [President] Abbas, what’s on Palestinian TV or written in Palestinian textbooks – it was dismissed by the other side as irrelevant to their narrative, which is that Israel is an apartheid state committing war crimes. But there is a direct connection between this doll and terrorist violence.”

He said: “Imagine if this were an Isis doll distributed in British schools and imagine the outrage. But this issue seems to have been hijacked by a coalition of those on the hard left, with a smattering of antisemites, and those looking for a new South Africa.”

Among those speaking in the debate, held to raise concerns about the treatment of minors, was Rochdale MP Simon Danczuk, currently suspended from the Labour Party because of allegations relating to his behaviour towards a 17-year-old girl.

MP Sarah Champion, who called the debate, complained of “disproportionate” response by the IDF relating to the throwing of stones by Palestinian youngsters. She has secured a meeting with Middle East minister Tobias Ellwood, who wound up the debate, to press the UK for closer monitoring of what happens to arrested children.

Mr Ellwood said he planned to raise the issue when he visits Israel next month but made it clear that “Israel is a democracy in a very difficult neck of the woods, and we encourage Israel to pursue high standards and the democratic process.”