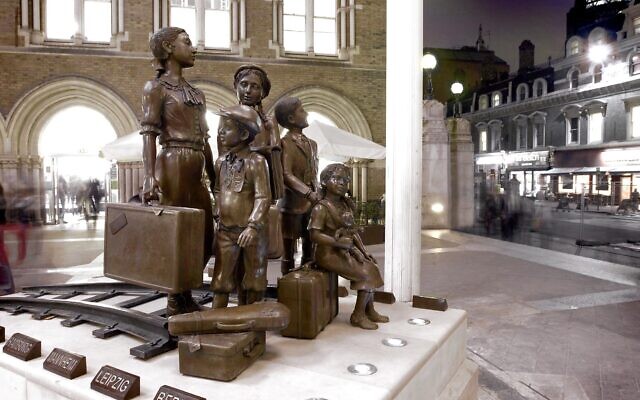 The Kindertransport memorial at Liverpool Street Station. The survey found most Britons do not know what it commemorates

Most British people do not know how many Jews died in the Holocaust, according to a major new survey that has exposed “profound gaps” in UK knowledge of historical events.

The study revealed a majority of Britons were not aware that six million Jews were killed in the wartime genocide and that a sizeable minority believed the true figure was below two million.

It also found few could name more than one Nazi concentration camp or ghetto and that most respondents were unaware of the Kindertransport.

A majority of participants were able to identify Auschwitz, but just 14% were able to name another camp or ghetto.

The survey, commissioned by the New York-based Conference on Jewish Material Claims Against Germany, was released to mark the 83rd anniversary of Kristallnacht.

“It is particularly disappointing to find that the Kindertransport, an important historic chapter, that reflected the best of humanity and should serve of a beacon of hope in the darkest of times, is being forgotten,” said Greg Schneider, of the Claims Conference.

When asked “what was the ‘Kindertransport’?”, more than three-quarters of UK respondents either gave an incorrect answer or said they did not know.

Just 24% correctly identified it as a British programme to rescue Jewish children from Nazi Germany before the outbreak of war.

Recall of Nazi camps among UK respondents (Chart: Claims Conference)Matthew Bronfman, who oversaw the survey for the Claims Conference, said that although the survey revealed most people British had a general understanding of the Holocaust and who it targeted, there were some significant gaps in knowledge.

“I think it’s really important that they know because numbers do put things into perspective,” he told Jewish News.

“When you compare the genocide, the Holocaust, to almost anything else, it was so brutal. A million-and-a-half children, not ten children, not a thousand children, but 1.5 million children, just for being Jewish.

“This was the greatest genocide in the history of the world and people need to understand that and [it happened] for no particular reason other than they were Jewish.” 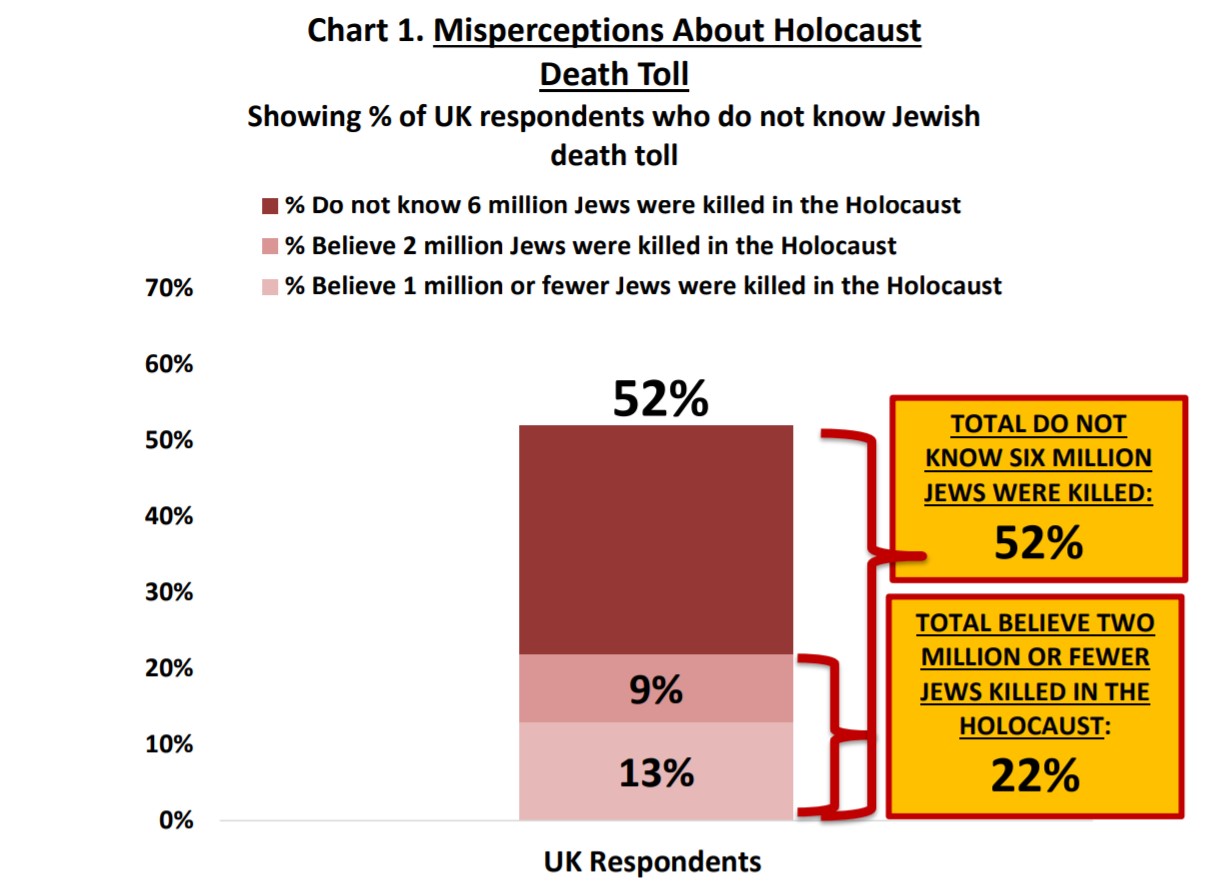 UK respondents who do not know the Jewish death toll (Chart: Claims Conference)

She said: “So the accuracy of history does matter. There is more work to do, but I just believe that just means we have to continue teaching the specific nature of the Holocaust.

The Claims Conference survey also revealed most Britons did not know when the UK Government became aware that Jews were being murdered in their millions, or how it reacted when it found out.

Nearly a third (32%) of British participants could not name any Nazi camp or ghetto in the UK, compared to 11% in France and 10% in Austria.

Roughly two-thirds in all three countries were able to readily identify Auschwitz, while 14% in Britain could name Bergen-Belsen, the camp liberated by British troops at the end of the Second World War. 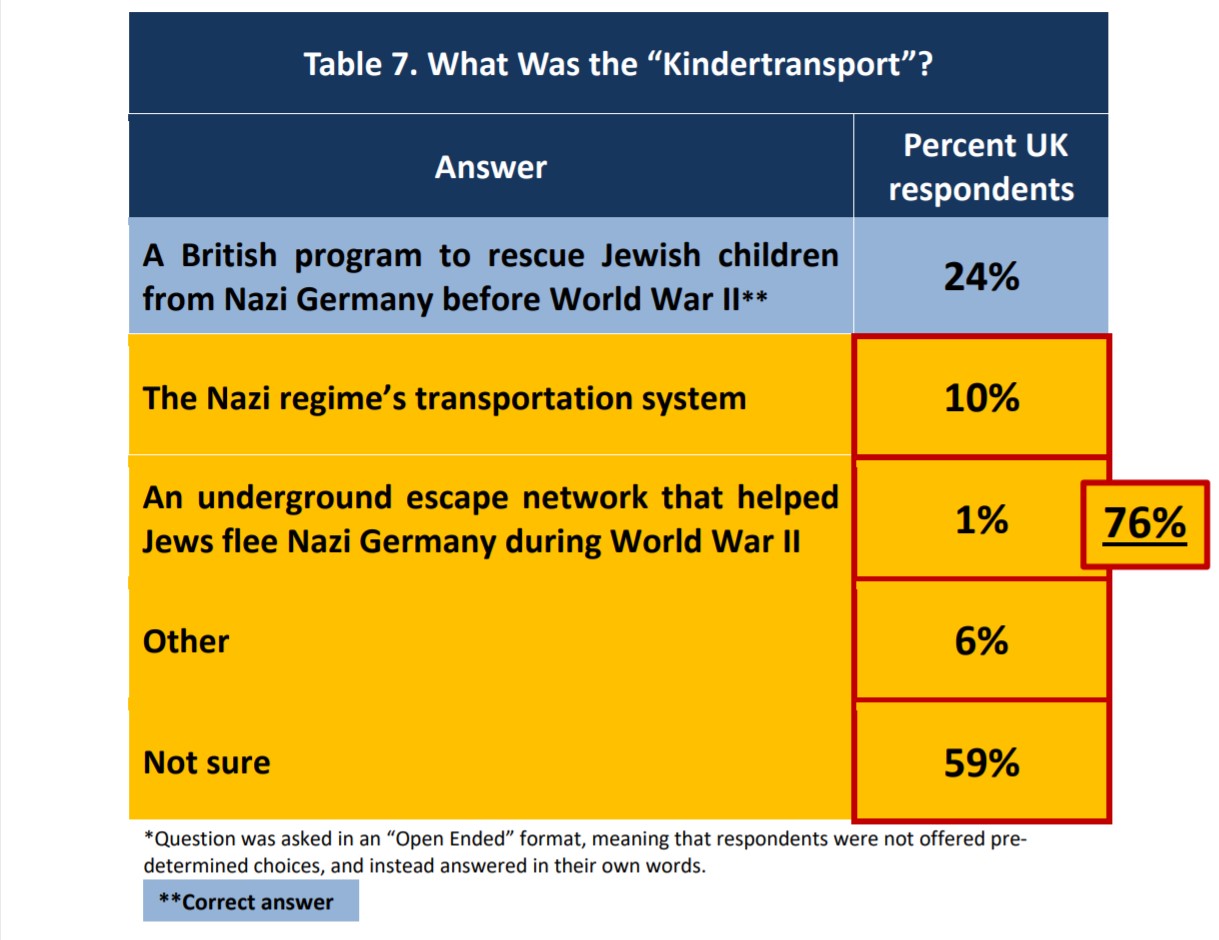 What was the Kindertransport? (Table: Claims Conference)

Yet the European numbers compared favourably to North America, where fewer than half of respondents could name any concentration camp or ghetto.

Olivia Marks-Woldman, chief executive of the Holocaust Memorial Day Trust, said the figures were a “stark warning against complacency in Holocaust education.”

She said: “It is critical, then, that we continue to do our work, to ensure that people of all ages – young people and adults – can mark Holocaust Memorial Day in their communities, learning more about the past and taking action today.”

The full survey can be seen on the Claims Conference website.