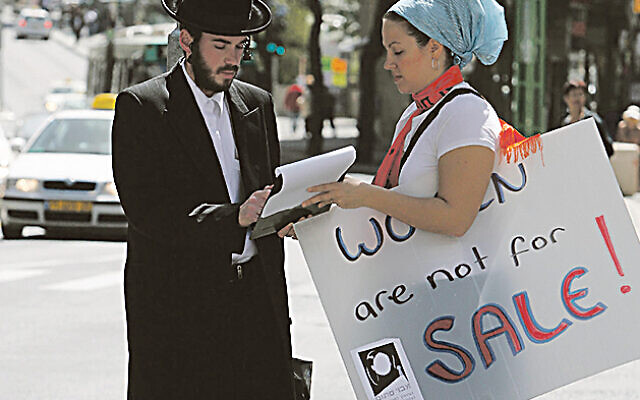 A man signs a petition at a demonstration for women's rights held outside the Rabbinical court for divorces.

More than 100 Charedi women are trapped in religious marriages in the UK, Labour Peer Jon Mendelsohn has said.

Speaking in his role with a cross-party parliamentary group that formed to help those trapped in religious marriages Lord Mendelsohn said he was “shocked” by the number of women contacting him for help since he raised the issue.

“The thing that has shocked me [is] that I alone have been contacted by people since I raised this issue,” he says. “Tens of cases, tens of cases, including a number of people in the Jewish community in which I live.”

An amendment to the statutory guidance under the Domestic Abuse Act now says that withholding a get can be a form of domestic abuse.

If it is deemed controlling or coercive behaviour, the man could be charged and, if found guilty, imprisoned.

Ministers hope the change will give women more power to complain to the authorities about their former partners for not granting a religious divorce.

Lord Mendelsohn believes there is no clash between religious and non-religious law, and questions the motives of the rabbis who say there is.

“They’ve chosen to create a conflict where none really exists. And I don’t know why that is, I suspect [it] is because they feel they’re losing control of parts of the process,” he told BBC Newsnight.

“But in any situation where a religious minority exists in a democracy, you have to balance these things… I think they really have to get a grip of the situation and come to realise that this is Britain, this is Britain in 2021.”

Eli Spitzer, a headteacher who is part of the Orthodox Jewish community in London, says some rabbis believe that women seeking help under the legislation “would start a process which is then irreversible”.

Some worshippers have told Newsnight they believe the Torah did not intend for women to feel stuck in unhappy marriages.

The Federation of Synagogues, a group representing Orthodox Jews, says any get “given under duress, whether due to physical threats, financial threats or the threat of imprisonment, is absolutely invalid” under Jewish law.

“The couple would remain married to one another, notwithstanding the granting of a get,” it said in a letter.