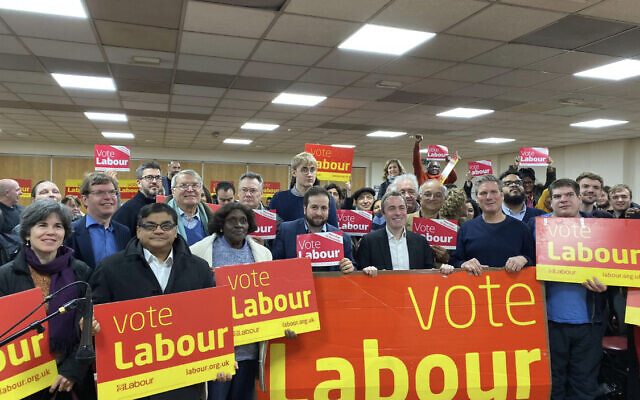 David Pinto-Duschinsky, left, on the campaign trail at the last election with Keir Starmer

Momentum has lost control of the local Labour Party in Hendon after a new 13-person executive committee – including several Jewish members – were elected unopposed at the north London CLP’s annual general meeting.

In a development that surprised some local members, the left-wing organisation that had previously backed Jeremy Corbyn’s leadership, failed to put any challenge to candidates from the more moderate wing of the party during Sunday’s AGM.

Many of the new Hendon Labour executive are also supportive of the current party leader Sir Keir Starmer.

At the last election Matthew Offord for the Conservatives was elected local MP with a majority of just over 4000, with Labour’s David Pinto-Duschinsky picking up over 40 per cent of votes in second.

Many local Jewish voters snubbed Labour at the polls in protest at Corbyn’s failure over antisemitism.

A spokesperson from Hendon CLP told Jewish News: “The last two years in the local Labour Party in Hendon have been incredibly challenging.

But after the election of a new Executive Committee over the weekend, we have turned a page and now head into a new era of sensible and moderate leadership.

“We’re delighted to have a top team, with a Jewish woman as Chair, who will have zero tolerance for antisemitism, work hard to continue to root it out from the local party, and will increase our engagement with Jewish residents.

“The new team is very supportive of Keir Starmer, and will be focused on winning elections to improve people’s lives.”

Jewish News understands that previous Hendon CLP committee members were amongst those to have been suspended by Labour over allegations relating to their conduct.

The proposed boundary changes published earlier this month suggested Hendon could join with Golders Green in a new constituency.