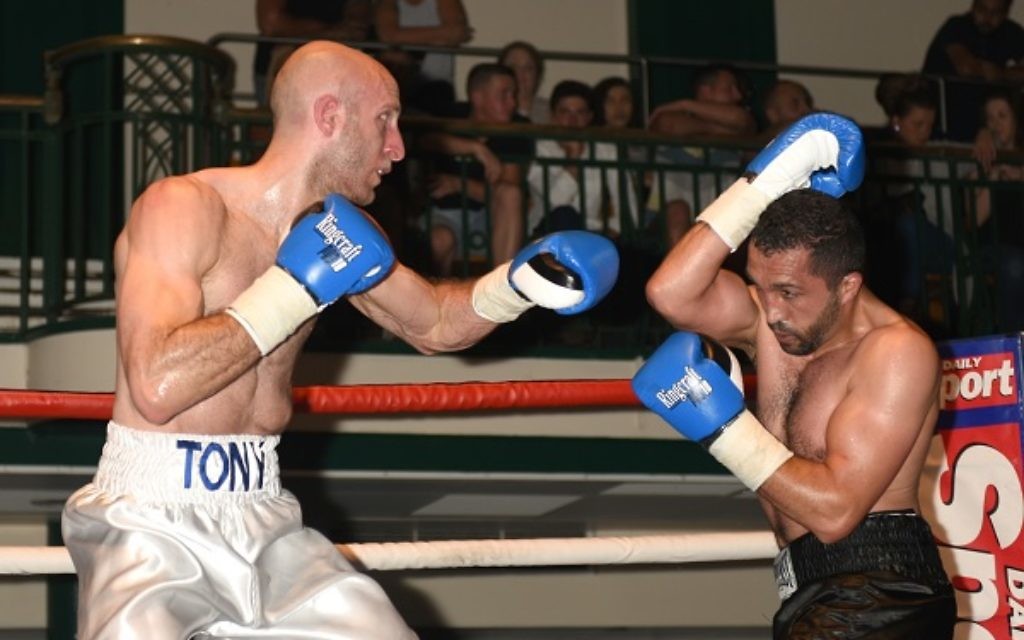 Milch made it eight wins from eight on Saturday night. PictureS: Phillip Sharkey

Tony Milch marked his pro debut at the York Hall on Saturday night by turning in a comprehensive display to maintain his 100 percent winning record.

Securing a comprehensive points win over Ali Wyatt, the 34-year-old won three of the four rounds, with the only blip on his performance occurring early in the fourth when he hit the canvas having been caught by a big left hand. However, such was his dominance, the knockdown never threatened him winning the bout.

Happy with his performance, he told jewishnews.co.uk: “I dominated the first three rounds and was boxing with a game plan. I was really sharp, winning the rounds, making him miss, and scoring nicely with in and out punches. I was caught off balance in the fourth, and suffered a flash knockdown. I got straight back up, recovered really well, but obviously couldn’t win the fourth as a result of it. But I’ll use it as a learning curve – not to get caught with my feet square. ”

More disappointed with having to fight a four-rounder, having fought six in his previous fight, he conceded: “I was disappointed, it’s not ideal as I did fight six in my previous round. I said beforehand he wanted a brawl, that he wasn’t fit for a six-rounder, I was caught off balance but the main thing is I finished the round composed and on top, and did enough to win it. Bar that incident in the fourth, it would have been a perfect night. And what it does show is that even if I do suffer something like that in the ring, I get straight back up and carry on.”

Much more pleasing for him was fighting at the iconic York Hall. “I loved fighting there, it was incredible,” he said. “There was such great support there for me too, it was an amazing atmosphere and a brilliant night.

“Before people got there, I looked at the venue from the outside, you look at the letters outside, being in east London, it was such a great experience and I was buzzing to have fought there. My promoter is looking to put on a few more shows there and I hope to box there again soon. It was the most passionate and vocal crowd I’ve fought in front of, I had maybe 100 supporters there for me, it was amazing. Everyone who came really enjoyed it and it shows that I’m now getting put in with dangerous opponents.”

Eight wins from eight, he’s eyeing up his tenth as being the one where he’ll fight for a title. “I’m on track for it”, he says. “It was also such a hard training camp, now it’s over, I’ll have a week off and then get back to training. A title fight will be at least eight rounds. I’ll probably fight six next and then go up to eight or 10 for a regional title, either a southern area or Lonsdale Challenger belt.

“As for now, I need to rest my hands – they’re really sore and swollen – but there are no injuries. I’m going on holiday for a week and then will be back in the gym and ease back into full training mode.