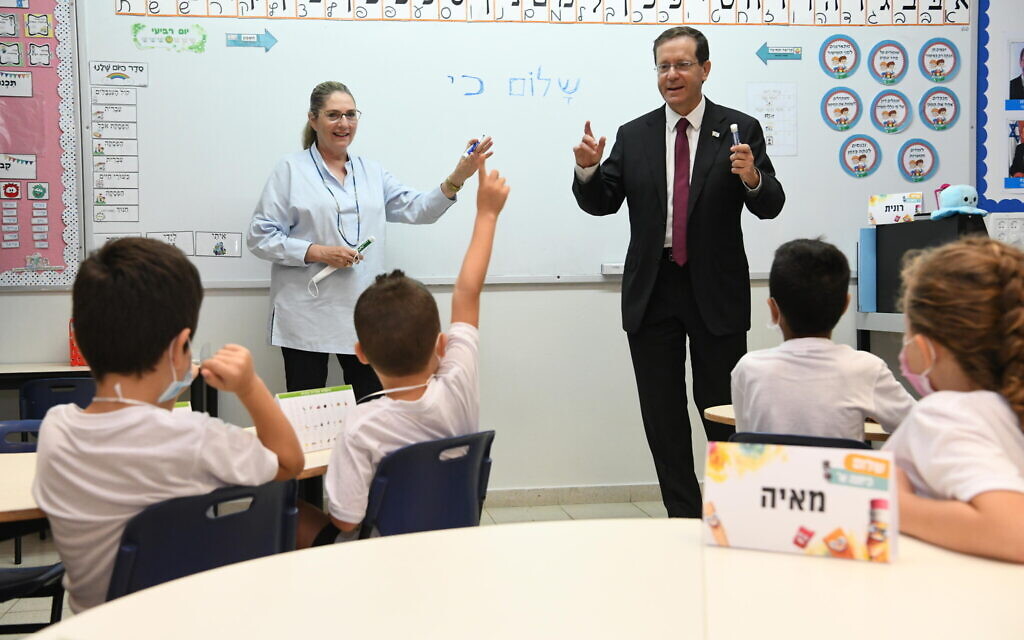 Michal Herzog and Isaac Herzog in the classroom

The past few months as First Lady of Israel have been an emotional rollercoaster. My husband Isaac Herzog and I have travelled up and down our country, meeting thousands of people from our marvellously diverse society and hearing their stories. Of all these, I want to share with you two stories that especially moved me.

You might think that these encounters could not be more different. But they say something profound about our journey as a people and the diverse Israeli home that we are building together.

In the Arab town of Taibe, I met women whose lives had been torn apart by violence. Each had lost a son, a husband, or a brother in an epidemic of rampant, senseless gun violence in the Arab community. In their eyes, I saw myself: a mother.

In Jerusalem, we welcomed to the President’s Residence the comrades of the late Border Police officer Barel Hadaria Shmueli, who was killed in cold blood defending our border with the Gaza Strip. They had lost a friend, a brother. Their lives had also been torn apart by violence. In their eyes, I saw my own sons.

Something extraordinary happened when we met: these two groups, from totally different parts of the mosaic of Israeli society, opened up to me. Away from the ceremonialism of the Presidency, we had a heart to heart conversation about our fears and hopes.

In democratic societies, freedom of speech is sacred. Citizens have a right to speak and therefore to be heard. But when I think of my responsibility as First Lady, I know that this is not enough. Citizens also have a right to be listened to. To have access to an attentive ear, to someone who will genuinely listen, with compassion and empathy, without judgement. This is my role as First Lady.

In his inaugural address, my husband Isaac Herzog promised to embark on a journey along the fault lines of Israeli society, a journey in pursuit of what unites us, despite our differences. It is a quest of collective self-discovery. It is a journey that we are making together.

My husband’s election as President of Israel has given me a rare gift: an opportunity to influence Israeli society, which we all so dearly love, to be a kinder, gentler, more compassionate place.

One of the causes that I intend to champion as First Lady is mental health. One of the first things I did in my new role was to visit Itzik Saidian, the 26-year-old IDF veteran suffering from PTSD who tragically set himself on fire because he believed that nobody was listening to his pain. The process of healing begins with listening.

No school in the world can prepare one for this precious responsibility. But my experience working with some of British Jewry’s most wonderful philanthropists on social projects in Israel has strengthened my sense of purpose in my role as First Lady.

For the past twelve years, I have had the privilege of being the Israel director of the Wohl Legacy, the remarkable philanthropic foundation in memory of the late Vivienne and Maurice Wohl. It showed me the extraordinary good that Diaspora Jewry can do in helping to reduce inequality and providing opportunity in Israel.

From Wohl’s program helping marginalised groups integrate into the Israeli workforce; to the Appleseeds Academy in the mixed Jewish-Arab city of Ramle, helping at-risk youth and other underprivileged groups catch up on digital training; to an academic complex in Safed with the biggest library in the Galilee—all this has been possible thanks to the British-Jewish tradition of giving.

I hope that I can continue to rely on Jews around the world to help us realise our national goal: to nurture a society based on our prophets’ vision of justice and peace, a vision that requires dialogue, which is only possible with genuine listening.

In the next seven years, we want to make the President’s Residence a home where all parts of Israeli society, and all parts of the Jewish People, know that they can find an attentive ear.

President Isaac Herzog and I are excited to embark on a new chapter in our journey together. We would not be in the same place without you.