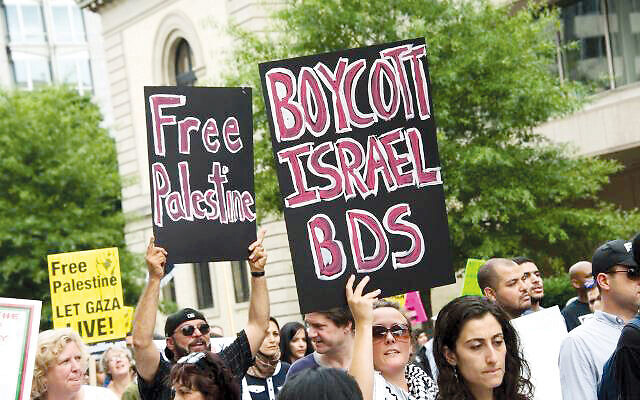 Protestors with signs urging the boycott of Israel

Methodist Church leaders have backed a series of hard-line anti-Israel motions ahead of their annual conference – including putting the blame on the Jewish state for the “deteriorating situation” for Christians in Gaza and the West Bank.

Meanwhile church leaders say they are “grateful” for another motion which accuses Israel of “self-promotion” over its successful Covid-19 vaccine roll-out.

A leaked copy of the guidance notes handed to all Methodists attending next Monday’s conference confirms that the leadership have backed calls from Circuit Meetings and District Synods to condemn Israel as an “apartheid state” and to promote BDS.

The guidance booklet also publishes motion passed by the Birmingham Synod which states: “The Synod is deeply disturbed by the plight of Palestinians living in Gaza and the West Bank, who have now lived under Occupation for over fifty years, for whom the last four years have been especially difficult…”

At no point does the Memorials to the Conference guidance point out that the plight of Christians is also determined by the Palestinian Authority and Hamas leadership in these respective regions.

Nor is it noted that Christians living in Israel do so under freedoms rarely found in other countries in the region.

The same motion from the Birmingham Synod then adds: “We have been further dismayed at Israel’s self-promotion in being foremost in rolling out the Covid vaccine, while at the same time severely limiting its access for Palestinians.”

Referencing a previously published report into Israel/Palestine titled “Cry for Hope” the conference notebook address the issue of annexation in areas of the West Bank and the Jordan Valley.

It states: “The Conference notes that the report argues it is time for the international community to recognise Israel as an apartheid state in terms of international law.”

On the issue of BDS the Methodist leadership “commend the Cry For Hope to the Methodist People, encouraging them to endorse it and act on its recommendations including through divestment and sanctions in relation to companies supporting the Occupation in any way.”

It is recommended: “Conference remains aware of the desperate situation in the West Bank and Gaza bought about through occupation and blockage and also of the increased reporting of antisemitism in the UK.

“This Conference calls to mind its previous resolutions appealing for solidarity with all and for constructive dialogue that is alert to (the) presence of racism and antisemitism in the UK and beyond.”

After being shown the motions for this year’s Methodist annual conference and the recommendations of the church’s leadership  Luke Akehurst, Director of We Believe in Israel, said: “It is distressing to see so much delegitimisation of Israel in the language used in Memorials (motions) sent to the forthcoming Methodist Conference.

“The memorials falsely portray Israel as having withheld Covid vaccines from Palestinians, they promote BDS, they talk about the ‘deteriorating situation of the indigenous Christian community in Palestine’ without acknowledging that this is happening in the PA controlled areas and that Israel is a haven for Christians in an otherwise hostile region.

“The reply from the Methodist Conference leadership is not much better, whilst they kick the BDS proposal into the long grass, they talk up a threat of annexation that is now off the agenda and they call for a military embargo at a time when Israel is defending itself from terrorist missiles.

“The Conference leadership acknowledges that ‘the complexity of this situation is not the lived experience of the majority of most British Methodists’ yet presents a simplistic picture of the situation that suggests they are not listening to both sides in the conflict.

“The nod given to the apartheid trope is particularly offensive.

“Lip service is paid to the threat of antisemitism in the UK, but there is no recognition that demonising Israel in the way these Memorials do feeds antisemitism.”

A spokesperson for the Methodist Church said they would not be commenting ahead of their annual conference discussing the memorials (motions).