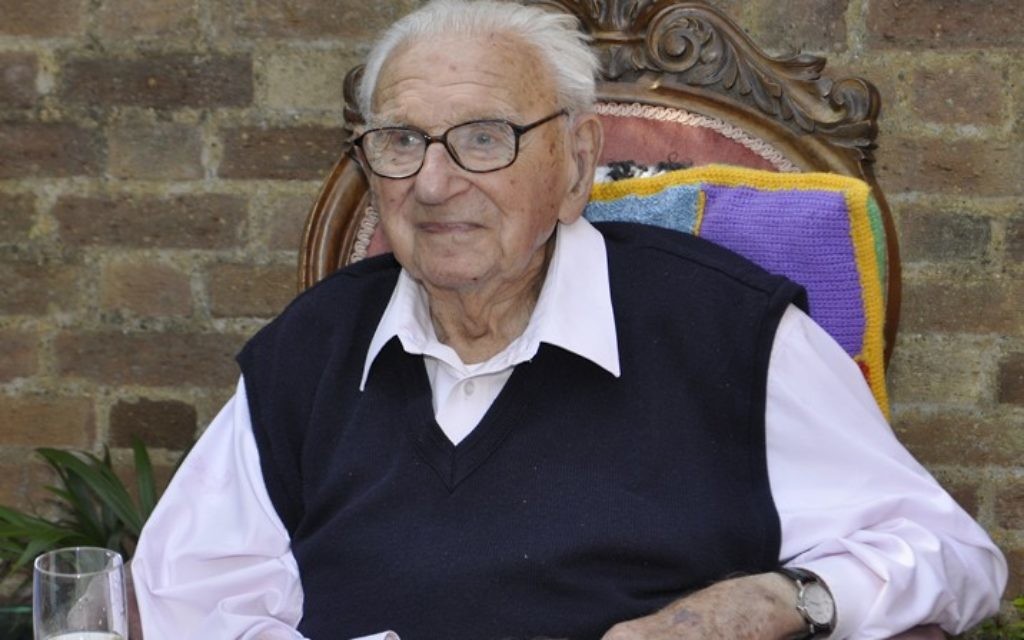 Leave your tribute to Sir Nicholas Winton, who has died aged 106.

Dubbed “the British Oskar Schindler”, he saved the lives of 669 mainly Jewish children by helping them flee the ravages of Nazi tyranny and slaughter in Czechoslovakia in the months leading up to the Second World War.

Please email us your tributes to Sir Nicholas at jackm@thejngroup.com and we will pass them to his family.

Chief Rabbi Ephraim Mirvis: “He was one of the greatest people I’ve ever met. His loss will be deeply felt across the Jewish world.”

Prime Minister David Cameron tweeted: “The world has lost a great man. We must never forget Sir Nicholas Winton’s humanity in saving so many children from the Holocaust.”

Michael Zantovsky, the Ambassador of the Czech Republic to the UK, said: “Nicky Winton was a symbol of the power of good, not just for the children he saved but for the Czech people, all of Europe and the entire world. He was an exemplary man, a wonderful man.”

Dame Stephanie Shirley, a Kinder, said: “I admired him tremendously. You must remember, he was just a young man from the City, going skiing and such. He wasn’t a humanitarian, but he found himself in that situation, did this amazing humanitarian act and then kept quiet about it. So, he was a young man about town, whose heart was touched, and he rose to the occasion.”

Esther Rantzen: “Sir Nicholas was one of my heroes. Not only did he save a generation of Czech Jewish children from the Holocaust, but he was a visionary who inspired thousands of today’s young people to believe that one person can really make a difference. He was far too modest himself to recognise that he was a tremendous force for good. I was so glad to be a tiny part of his story and proud to count him as a friend.”

On hearing of the sad passing of Sir Nicholas Winton, Rabbi Lord Jonathan Sacks issued the following statement: “Sir Nicholas Winton was one of the heroes of our time, a man who saved 669 mostly Jewish children from Nazi-occupied Czechoslovakia on the eve of the Second World War. He was “the British Schindler,” all the more impressive for thinking that there was nothing special about what he did, seeking neither honour nor recognition. Our sages said that saving a life is like saving a universe. Sir Nicholas saved hundreds of universes. He was a giant of moral courage and determination, and he will be mourned by Jewish people around the world.”

Michael Newman, Chief Executive of The Association of Jewish Refugees (AJR) said: “We were deeply saddened to learn of Sir Nicholas Winton’s passing. Sir Nicholas will be rightly venerated as a true hero whose bravery, altruism and determination saved the lives of some of the youngest victims of Nazi oppression. He was notably modest about his remarkable achievements, which will hopefully inspire future generations to intervene when others are in need of help.”

Karen Pollock MBE, Chief Executive of the Holocaust Educational Trust said: “Sir Nicholas Winton’s selfless, noble and courageous acts saved 669 young Jewish lives from the horrors of the Holocaust. ‘Nicky’s children’, as they have come to be known, and the generations who have followed them, will be eternally grateful for this modest man. Anyone who has heard of Nicholas Winton has learnt something about standing up against injustice – he was a hero of our time. He will be greatly missed. ”

Paul Anticoni, World Jewish Relief’s chief executive, said: “World Jewish Relief extends our condolences and long life to the family of Sir Nicholas Winton. His legacy, saving 669 children from the Nazis, will endure forever. The British Jewish community is, and will remain, forever grateful for his courage, bravery and extraordinary achievement. His modest, unassuming manner, despite his remarkable achievements, makes him a role-model for us all.”

Sir Mick Davis, Chair of the Jewish Leadership Council and of the Prime Minister’s Holocaust Commission, has reacted to the death of Sir Nicholas Winton: “There are few people who have had such an impact on history as Sir Nicholas Winton.  Whilst the world stood by as Jews were persecuted by the Nazi’s in the period before the Second World War and then annihilated in the years of the Holocaust, Sir Nicholas refused to be a bystander or to allow evil to prevail. He made a remarkable personal intervention in what is today known as the Kinder transport and saved the lives of young and innocent Jewish children who otherwise would have most certainly have  died in the concentration camps. His legacy lives on in the thousands of people, directly and indirectly, who owe their lives to his heroism. His name shall endure for generations as a symbol of the power of ordinary people to make a difference to the lives of others.  I pass on my condolences to his family at this time as we all mourn his passing.”

Simon Morris, Chief Executive, Jewish Care comments: “We were really sad to hear the news about Sir Nicholas Winton. So many members of our community are here today thanks to his foresight in recognising and acting upon the rise of the Nazi party in Europe. We, at Jewish Care, thanked him for his amazing contribution to the community through the presentation of an internal award in 2003”.
Natasha Kaplinsky who met Sir Nicholas Winton on his 105th birthday last year as part of the Prime Minister’s Holocaust Commission, said:
“Our country should be so proud of Sir Nicholas Winton. In the darkest moments of our history he showed how the best of humanity can still shine through. When I met him on his birthday last year I was struck by his incredible modesty. For years he didn’t even talk about the extraordinary things he had done. It is humbling to think about the courage he showed in saving so many lives. It is so important that we remember his story and the stories of those he saved. And I am honoured to be involved with the UK Holocaust Memorial Foundation and to be recording the testimony of so many of Britain’s Holocaust survivors and camp liberators so that their stories are never forgotten.”