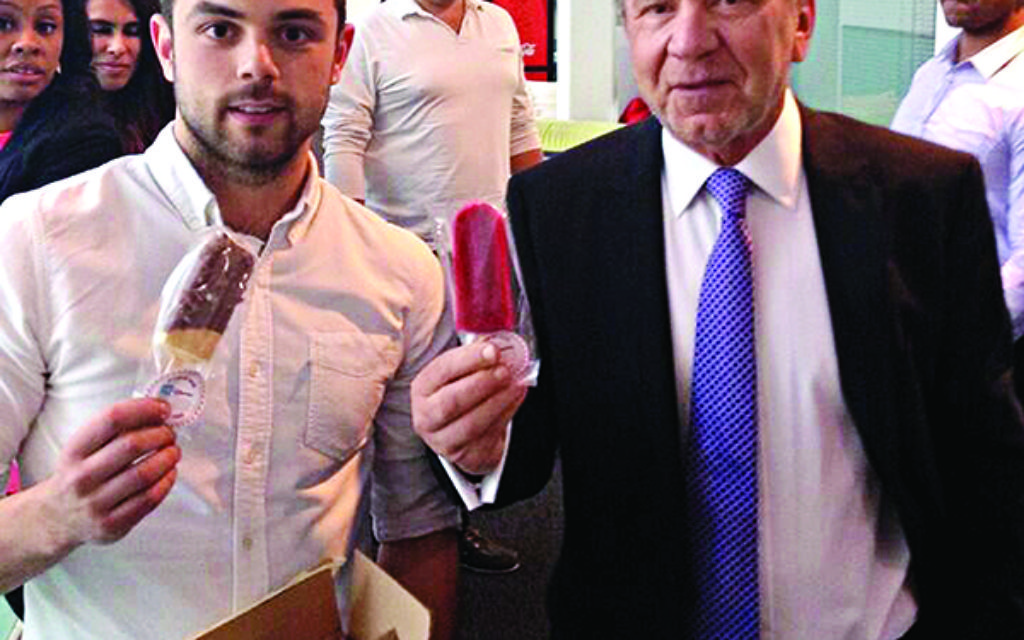 Cesar Roden is the co-founder and director of Ice Kitchen.

To the outsider, it seems predetermined that Cesar Roden would work within the food industry. For his grandmother is Claudia Roden, the Egypt-born doyenne of cooking who introduced Britain to Middle Eastern food with her first book in 1968.

“Well, it wasn’t always inevitable,” laughs Roden, co-founder and director of Ice Kitchen, a company making and selling gourmet artisan ice lollies. “We used to go to my grandmother’s and she had these amazing spreads, but up until the age of around 11, I’d refuse to eat anything – I’d only eat pasta and cheese.”

Thankfully, his palate became more discerning and, after A-levels, Roden, 25, trained as a chef at Westminster Kingsway College before working for a couple of gastropubs in London. “All I wanted to do was to start my own food or drink business eventually,” he says.

His break came when his aunt, Nadia (Claudia’s daughter), an award-winning artist who lives in New York, started a company making and selling ice lollies. He went over to help her, with often unexpected results. “The first day I got there we had to go to the downtown police station because her cart had been wrongly confiscated,” Roden recalls. That aside, Nadia landed a plum spot on the Highline Park in the city.

“It was amazing what she was trying to do – handmade lollies, dipping them into chocolate and sprinkling them with caramelised orange peel,” he remembers. “It was an almost crazy amount of work, but it was an amazing product; no one else, even in New York, was doing such a gourmet take on ice-lollies.”

Cesar at his ice kitchen stall

Back in London, he sold ice creams he’d bought at markets at the Southbank until it was time to sell his own in the spring of 2013. Originally hand-making the ice lollies in Crouch End – “the first summer we had small machines in the top floor of my parents’ home” – Ice Kitchen, which employs up to eight people in summer now makes them in commercial premises in Park Royal. They are sold in COOK shops nationwide, in Curzon cinemas, Champneys Health Spas and other independent delis, farm shops and cafes. The company will also be at the Kerb festival on the Southbank Riverside between 3 to 5 July and 7 to 9 August. Is it still a crazy amount of work, I ask Roden. “Yes!” he laughs. “But we have simplified some of the recipes and have chosen ones we can do on a scale.”

And when it came to choosing which flavours to offer, he had many choices – he and Nadia had published a book last summer, 50 Lolly Recipes: Sensations On A Stick (£12.99, Quadrille), which features flavours such as Egyptian hibiscus and peach, earl grey, and pistachio and rose.

In the early days, his grandmother helped to develop some of the recipes – including the pistachio and rose flavour, which is based on an Egyptian milk pudding called muhallabeya. “Claudia used to make this for us as kids and she sprinkled it with pistachios and scented it with rose water,” Roden explains, adding that he often calls her for advice on ingredients and pairings.

He used to be able to design flavours more off the cuff than he can now, explaining: “The first year you want to create as much attention as possible. We’d go to the fruit market and if we saw an unusual fruit or one that was going cheap that day, we could be flexible but now that we are moving into the wholesale, we had to make the range smaller.”

His team is always bringing out new flavours – this year it has a range of eight; around four flavours are from the book, including his favourite, Mojito and Mexican chocolate (which features cinnamon and cayenne pepper), as well as three new flavours. The Mojito is a bestseller, along with raspberry and lime. On one occasion, someone bought the entire stock of Mojito lollies, rushing them home for a dinner party.

But, much like others who are setting up in business, Roden has found that things don’t always run to plan. “We had huge stress last summer – everything that could have gone wrong went wrong,” he admits. “The machines we were relying on from South America had the wrong type of power, so we had to put everything through small machines. It was a good problem because we had a lot of orders, but we were working 18-hour days.”

There were also issues with development. “When you upscale production, there are always going to be problems and every manufacturer I’ve spoken to says it’s a constant battle and can cause a lot of stress.”

Indeed, appearing on BBC1’s The One Show with Lord Sugar, the business magnate told him he should have an alternative product to get through the winter. Roden ignored the advice and, in any case, is ice cool about expanding the business.

“This year, we have got quite a bit of extra capacity and we’ve got a distributor who will be taking our products around the country,” he explains. “We hope to get the lollies into lots of independent delis and farm shops all around the country and build on that.”

To find out more, visit www.icekitchen.co.uk