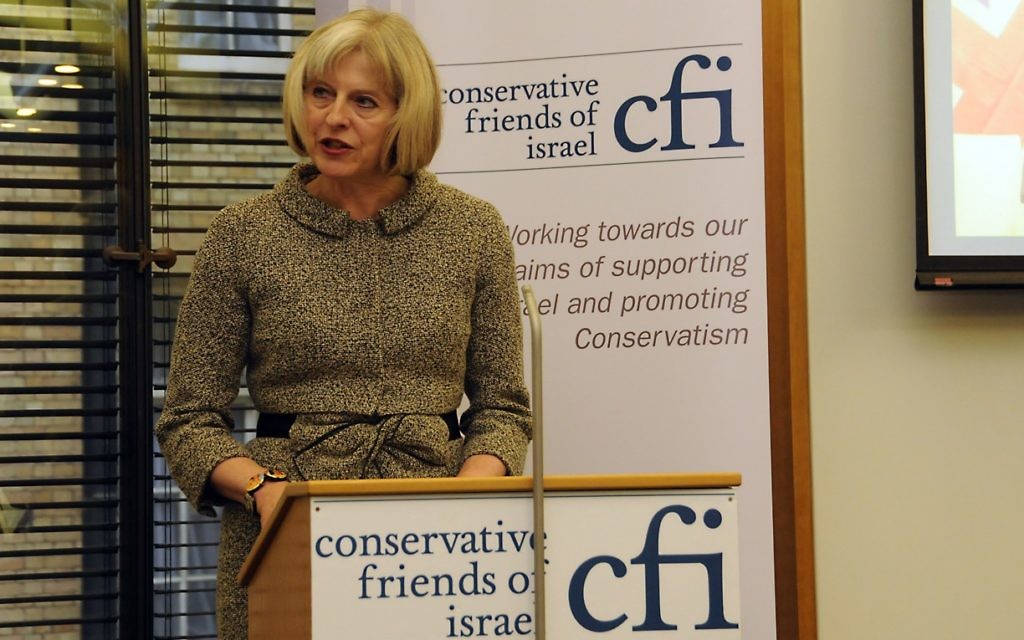 Theresa May speaking at a Conservative friends of Israel event

The Government’s Home Secretary, Theresa May gave a speech at a Conservative Friends Of Israel reception.

Here is her full speech:

It seems fitting that we have gathered here in the Attlee Room of Portcullis House, since Clement Attlee was the British Prime Minister on May 14, 1948, when David Ben Gurion proclaimed the establishment of the State of Israel.

While the experience of the British Mandate after the Second World War was difficult to say the least, Britain, of course, played a significant part in the story of the creation of the State of Israel.

“His Majesty’s government view with favour the establishment in Palestine of a national home for the Jewish people, and will use their best endeavours to facilitate the achievement of this object, it being clearly understood that nothing shall be done which may prejudice the civil and religious rights of existing non-Jewish communities in Palestine, or the rights and political status enjoyed by Jews in any other country.”

Those words stand out because they were such a bold declaration of intent to allow for the creation of a Jewish homeland in Palestine.  But almost a century later, they also stand out because they pose exactly the dilemma posed by the Arab/Israeli conflict today.  How do we ensure that Israel has the safety and security its citizens deserve? How do the Palestinian people get the self-representation they desire?  What can we do – and here in Britain this is still shamefully a topical question – what can we do to prevent anti-Semitism in this country and across Europe?

I have been appalled by recent reports from the Community Security Trust indicating a rise in anti-Semitic attacks in the UK. Yesterday I along with Theresa Villiers met Mike Freer MP, David Burrows MP and Lee Scott MP to discuss their concerns and the action the Home Office is taking to combat anti-Semitic hate crime.

Accounts of Jewish people being verbally abused on the street, placards displaying loathsome threats, and bricks being thrown through synagogue windows are – like any form of hate crime – abhorrent and unacceptable.

A straw poll conducted by the Jewish Chronicle also found that 63 per cent of Jewish people in north London questioned their future in the UK amid the rise of anti-Semitic attacks. This picture is being mirrored in other European countries. France has recently been reported as the leading country for Jewish emigration to Israel for the first time.

I am clear that everyone in this country should be able to live their lives free from racial and religious hatred and harassment. No one should live in fear because of their beliefs or who they are. That’s why we have provided over £2.3 million of funding to organisations and schools to help prevent hate crime, increase reporting and improve the operational response.

We have also established a working group to tackle anti-Semitism, which brings together community representatives and experts from across Government to help explore issues affecting Jewish communities. And we are working closely with the police and criminal justice agencies to encourage victims to report incidents, for instance through third-party services and the True Vision website.

This country has one of the strongest legislative frameworks in the world to protect communities from hostility, violence and bigotry. But I am clear that we must keep both the operational and legislative response under constant review. There is absolutely no place in our country for anti-Semitism whatever form it takes.

Daniel Taub is a Israel’s Ambassador to the United

Earlier this year, I had the privilege of visiting Israel and the Palestinian Territories for the first time.  The purpose of my trip was to meet experts in cyber security and to see for myself the progress the Israelis have made in combating modern slavery.

Because while it is not well known, Israel was the first country in the world to pass groundbreaking anti-trafficking legislation.  In those respects, my visit was really very useful, but what I learned was overshadowed by the terrible news that emerged during my stay that the bodies of three missing Israeli teenagers had been found near Halhul in the West Bank.

The murder of those boys – and the loss of life among Israelis and Palestinians in the subsequent military operations in Gaza – is a sad reminder that the Arab/Israeli conflict is not just an abstract debate argued over the pages of Western newspapers and television screens.

It is a real conflict with innocent victims on both sides. It is about self-identity for the Palestinian people.  And it is about Israel’s right to defend its citizens from indiscriminate terrorist attacks and existential threats.

It is worth re-stating the threats faced by Israel because they are considerable.  There are the familiar but deadly threats from Hamas and Hezbollah.

The collapse of Syria that has spawned ISIS and threatens to destabilise Lebanon and Jordan.  The instability of the wider region.  And the threats issued to Israel by Iran.  No democratic government could, in the face of such danger, do anything but maintain a strong defence and security capability and be prepared to deploy it if necessary.  That is why I – and the whole British Government – will always defend Israel’s right to defend itself.

Those of us who are sympathetic to Israel’s security predicament must always make clear that the loss of any civilian life – whatever the nationality of the victim – is an appalling tragedy.  And we must remember that there will be no lasting peace or justice in the region until the Palestinian people are able to enjoy full civil rights themselves.

I say this not because I want to make a naïve and platitudinous point about the necessity of a two-state solution.  When Israel faces the full range of threats I have just listed, when Israel faces enemies that are intent on its very destruction, when Hamas uses Palestinian civilians as human shields for its rockets, when there are thousands of Israeli settlers living in the West Bank, it is easy to talk about a two-state solution but almost impossible to know how to move towards one.

But that does not mean we can afford to give up.  Taking even the smallest of steps towards a lasting peaceful settlement will take acts of huge political bravery and great statesmanship on both sides of the divide – but they are steps that need to be taken.”