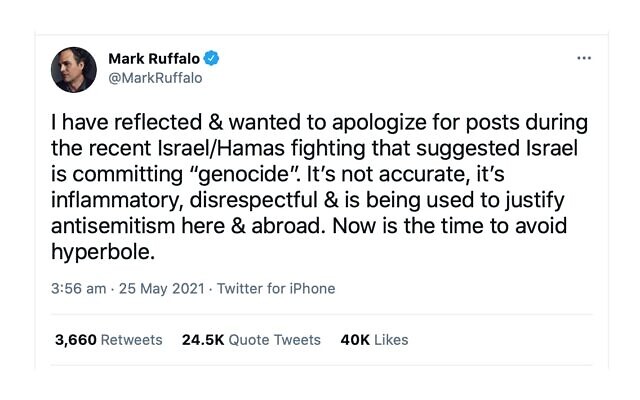 Marvel star Mark Ruffalo has apologised for posts suggesting Israel was “committing genocide” during its conflict with Hamas.

The actor and producer, who plays the Incredible Hulk in films including Avengers: Endgame and Thor: Ragnarok, said the comments had been incorrect and were being used to justify anti-Semitism.

The 53-year-old wrote on Twitter: “I have reflected & wanted to apologize for posts during the recent Israel/Hamas fighting that suggested Israel is committing ‘genocide’.

“It’s not accurate, it’s inflammatory, disrespectful & is being used to justify antisemitism here & abroad. Now is the time to avoid hyperbole.”

Ruffalo, who has 7.5 million followers on the social media site, has posted about the conflict a number of times in recent weeks.

In one post, he shared the hashtag #GazaUnderAttack and called for sanctions on Israel, sharing a link to a petition website.

He wrote: “Over 30 children killed. Mothers dead. Hundreds injured. We are on the brink of a full-scale war.

Israel has fired hundreds of air strikes against targets in Gaza, while Hamas has returned more than 4,000 rockets towards Israel, with more than 250 killed in total.

A number of celebrities including actress Gal Gadot, singers Rihanna and Dua Lipa, and supermodel Bella Hadid have spoken out against the violence.

Egyptian mediators are currently overseeing a ceasefire between Israel and Hamas and the UK Government has pledged to provide a £3.2 million aid package for civilians under attack in the region.