Unlike many Jewish museums, Manchester’s refurbished one – housed in an historic shul – is no relic of an extinct community, but tells the story of its vibrant history and present

Even before its £8.35 million renovation, the Manchester Jewish Museum was a remarkably eye-catching institution.

Housed in a former synagogue on a busy road in an industrial part the north of England’s largest city, it stood out from the car washes, supermarkets and hardware stores of Cheetham Hill Road thanks to its red-brick facade. The look marries Victorian architecture and the Moorish style favoured by the members of the Portuguese-Spanish Sephardic Jewish community that built it in 1874.

As it expanded and gentrified, the Jewish community of Manchester – a diverse group with many blue-collar labourers from across the country and Eastern Europe who converged because of the city’s steel production and other industries – moved to leafy suburbs north of the bustling centre.

But the synagogue building, the oldest surviving in Manchester, remained a communal symbol long after its congregation disintegrated in the 1980s. It became a museum, the only one in the country housed inside a synagogue.

Now, thanks to a substantial grant from the National Lottery and other contributors, the museum has been modernised and reopened, with a large extension boasting a massive exterior with Moorish-style decorations on rust-coloured metal. The renovations celebrate the passage of time and the Jewish communities’ industrial credentials while complementing the building’s trademark colour.

“It’s a big moment for us,” Max Dunbar, the museum’s chief executive, told the Jewish Telegraphic Agency ahead of the reopening on July 2, which follows two years of renovations.

It’s also a big upgrade, adding a kosher-style vegetarian cafe — the menu recounts the history of the Jewish dishes it advertises. There’s additionally a “learning kitchen” where visitors can experience how Jewish foods are made in participatory workshops. 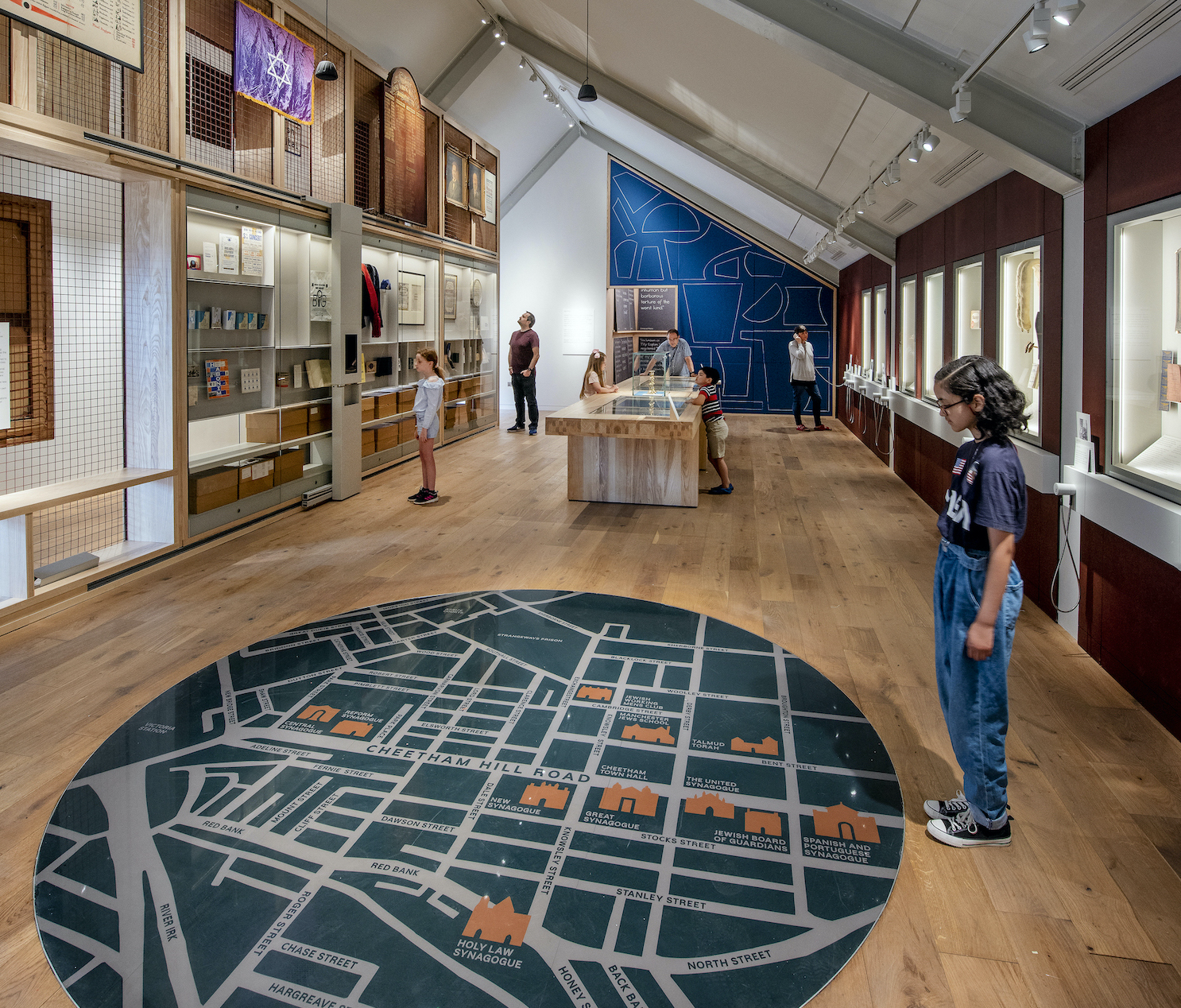 The museum’s content has been tightened, adapted and presented in a more people-oriented manner that propels the museum, which even Dunbar described as having been “very tired and dated,” into the 21st century.

Despite having many fans and volunteers, the museum prior to the renovation featured displays that felt archival, including a prayer shawl with a laminated piece of paper alongside giving some basic information about the artefact, or impersonal notes offering dates and statistics.

Those laminated texts have migrated to high-quality information boards, and the content has been reworked.

Among the more gripping artefacts on display is a dress that belonged to Helen Taichner, a Holocaust survivor who arrived in Manchester in 1946 after hiding in a coal cellar in her native Polish city of Katowice. The dress — featuring a bulky and inelegant flower pattern for a teenager — hangs alongside Taichner’s passport and leather documents satchel, underlining her foreignness and the contrast between her young age and the horrors she had experienced.

Her diary is also on display. 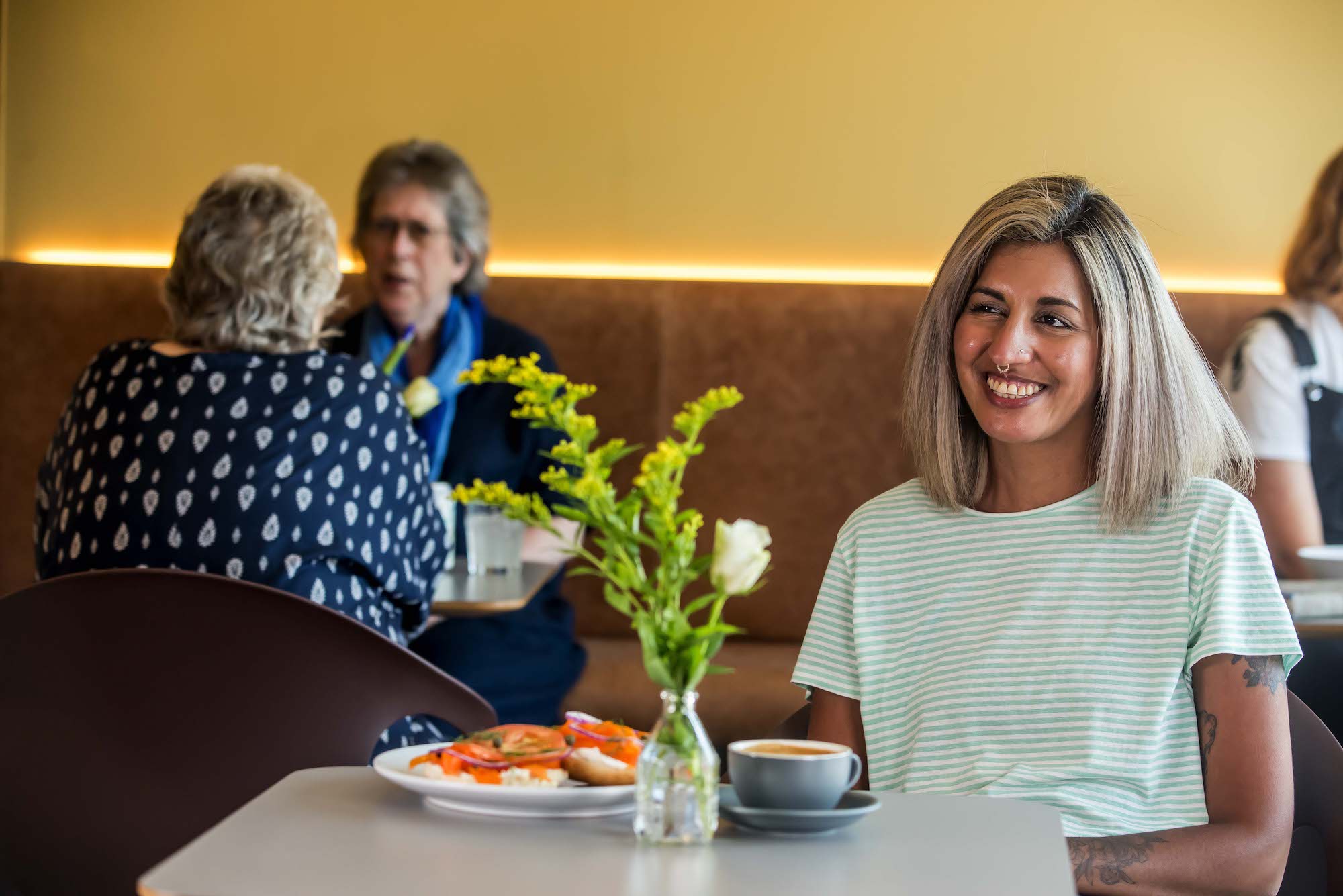 The newly opened kosher-style cafe is part of a metal-exterior extension added to the Manchester Jewish Museum during two years of renovations that began in 2019. (Chris Payne)

“My happiness knows no bounds,” she wrote on the day that she received her visa to enter the United Kingdom.

That part of the display “explores why various Jewish people came to Manchester, just showing the global reach and the global roots of Manchester’s Jewish communities,” Dunbar said. “But then in a personal way, through people’s own life stories rather than a dry academic manner.”

Not everything is entering the 21st century. The renovated museum remains low-tech by design, offering few touchscreens or other electronic displays.

“You go to a lot of museums these days, and there are computer screens everywhere and buttons and flashing lights,” Dunbar said. But at the Manchester Jewish Museum, “there’s a lot of wood in there, a lot of soft furnishing. We want it to make people feel relaxed and comfortable in the space, so they can really embrace and listen to the stories and learn about the stories.” 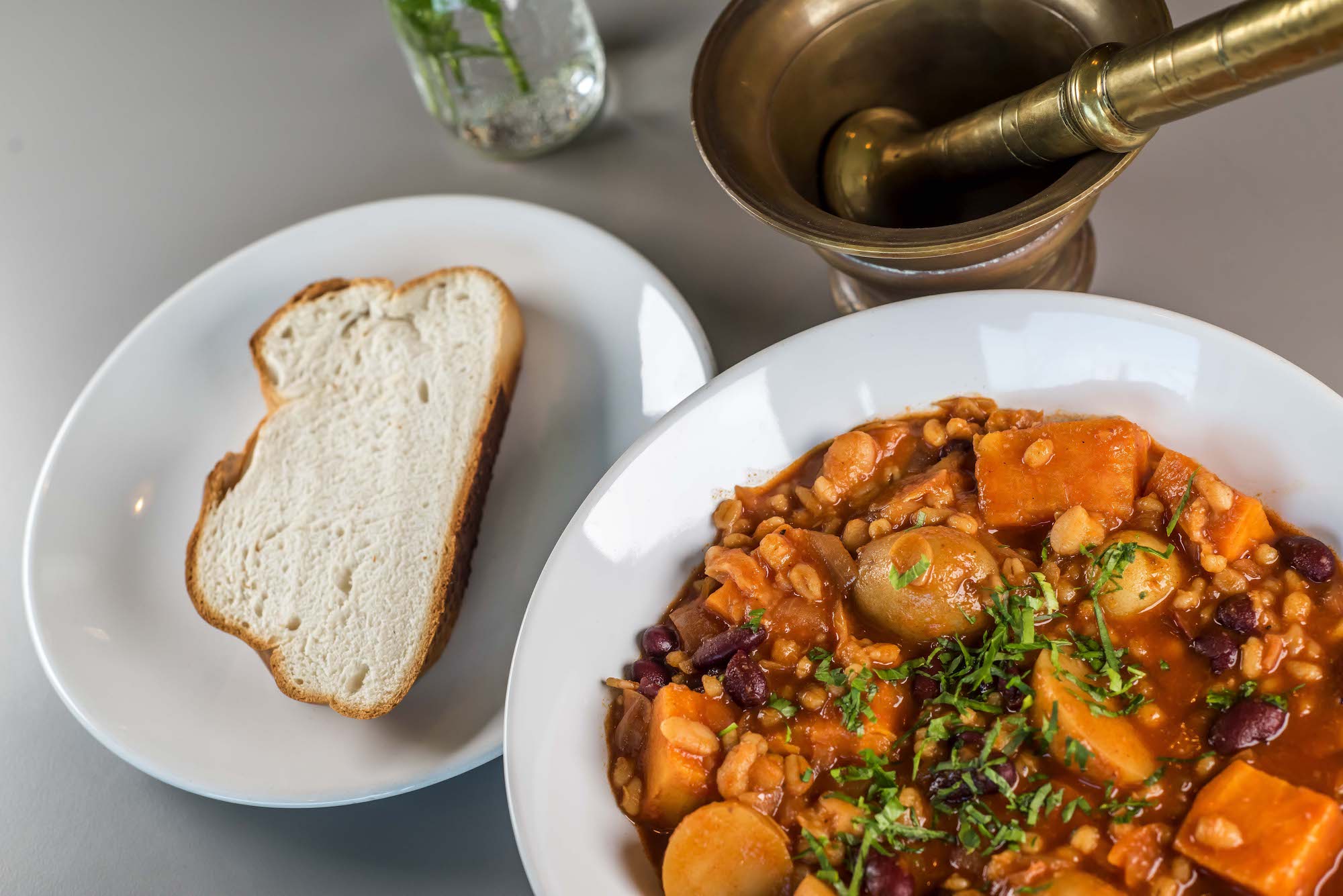 Cholent is featured and served at the kosher-style cafe at the museum, which reopened following renovations on July 2, 2021. (Chris Payne)

One impressive vintage item on display was discovered during the renovations: a time capsule made of thick glass containing newspapers, synagogue documents and a handful of coins from the 1870s. Community members had stuffed the capsule in a wall and it was exposed last year, much to the delight of city archaeologists and the museum’s management.

The final section of the museum consists of quotes by 16 Mancunians written by hand on chalkboards. Each quote – one reads “I’m not going to meet God without knowing him before I get there” — has a serial number that visitors can look up in a listening station. The idea is for visitors to search a quote and put on headphones to know more about the story behind it, explained Alexandra Grime, a museum curator. 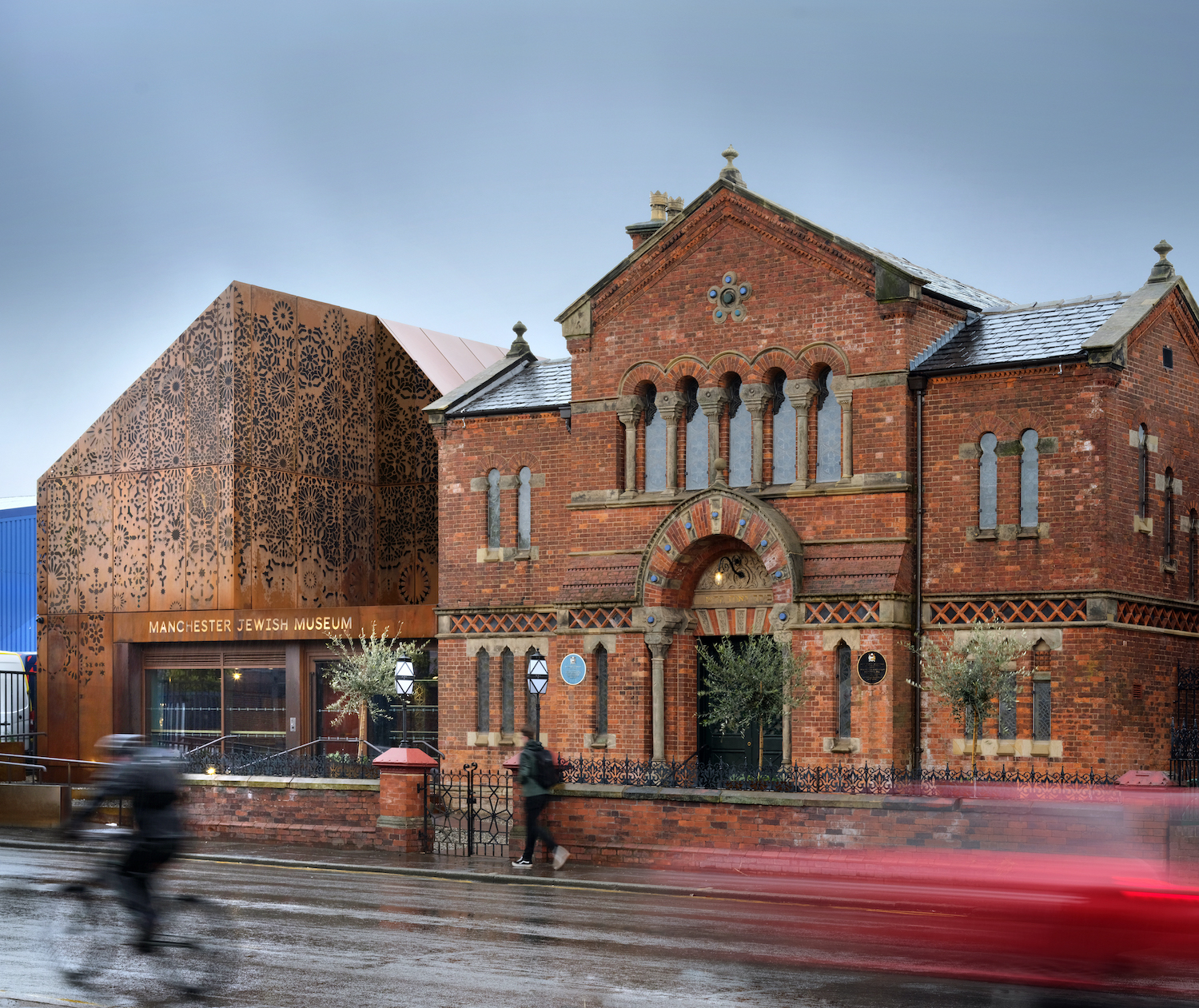 Exterior of the museum (Philip Vile)

At the heart of the permanent display is the historic interior of what once was the Spanish and Portuguese Synagogue of Manchester. Small in dimensions with only about 100 seats, the synagogue makes up for its humble size in atmosphere. Boasting burgundy carpeting and elaborate golden decorations around the elevated women’s section, its wooden pillars and mahogany pews are washed by emerald-tinted light filtering in through the windows’ painted glass depictions of biblical scenes.

Unlike many Jewish museums in Europe, the Manchester Jewish Museum is no relic of an extinct community.

About 30,000 Jews call the Manchester area home, making the city the second-largest Jewish community after London. (The capital’s rising housing prices are part of the reason for Manchester’s growth.) The growing population is located mainly in the suburb of Prestwich, with waiting lists for desired Jewish schools and even kindergartens.

This suburban revival is referenced in parts of the museum’s display. But the museum also preserves the memory of times when its building used to be the centre of Jewish life in the area. A giant map of the old Jewish neighbourhood with the museum at its centre is featured on the atrium floor. The area still has Torah Street – the only one in the United Kingdom. 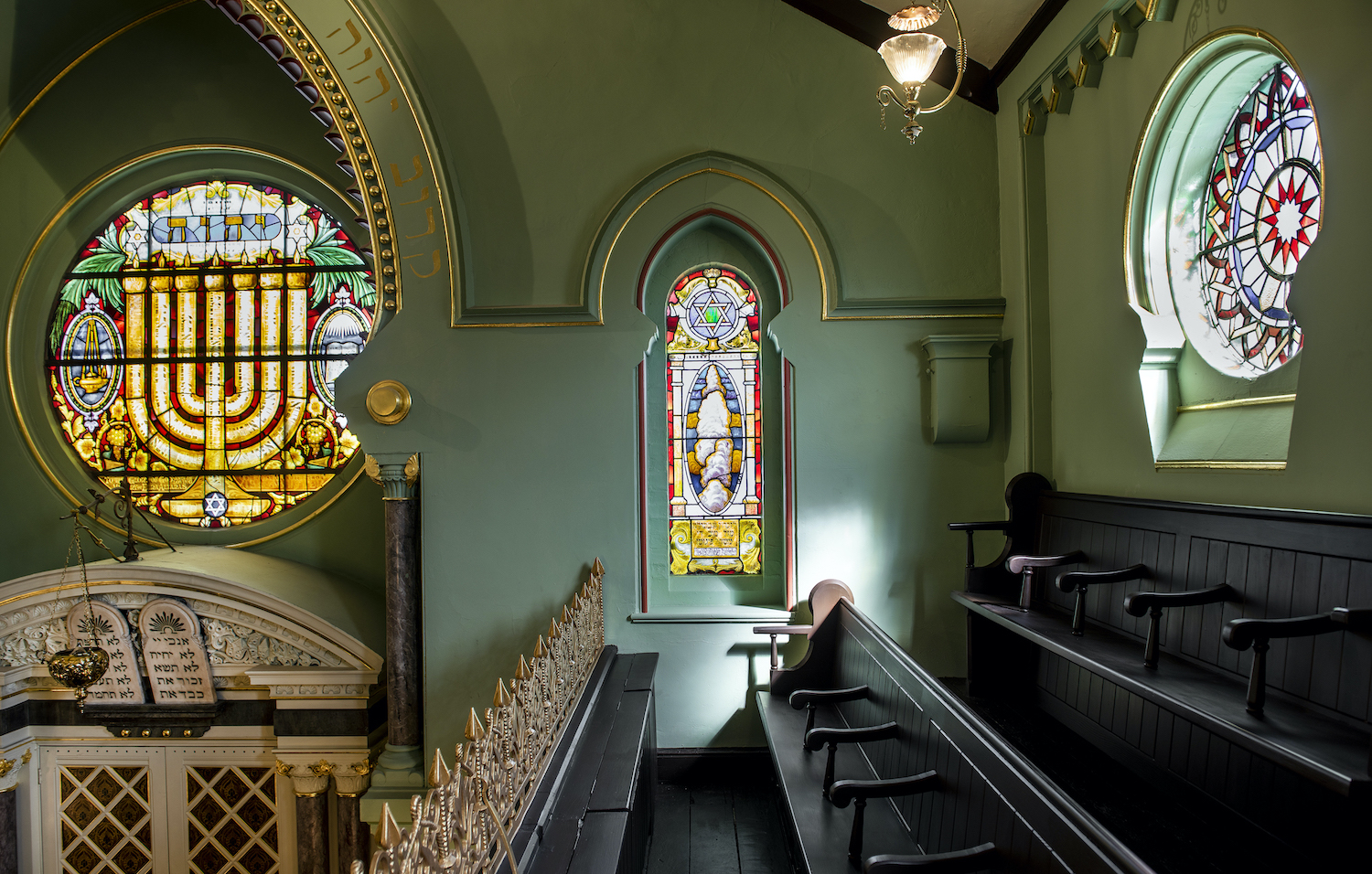 Inside the museum (Joel Chester Fildes)

The museum’s atmosphere and design philosophy reflect how many Mancunians, including Jews, cherish the city’s informal, chummy and accessible feel compared to the big metropolis of London.

“We don’t want it to feel, you know, like a sort of inhospitable, slightly functional institution,” Dunbar said of the renovated museum. “That’s not who we are. We’re sort of a home, a home away from home in a way, and with food at the heart of that, and with these nice, relaxed informal spaces, we can deliver that vision and hope people feel at home when they come here.”