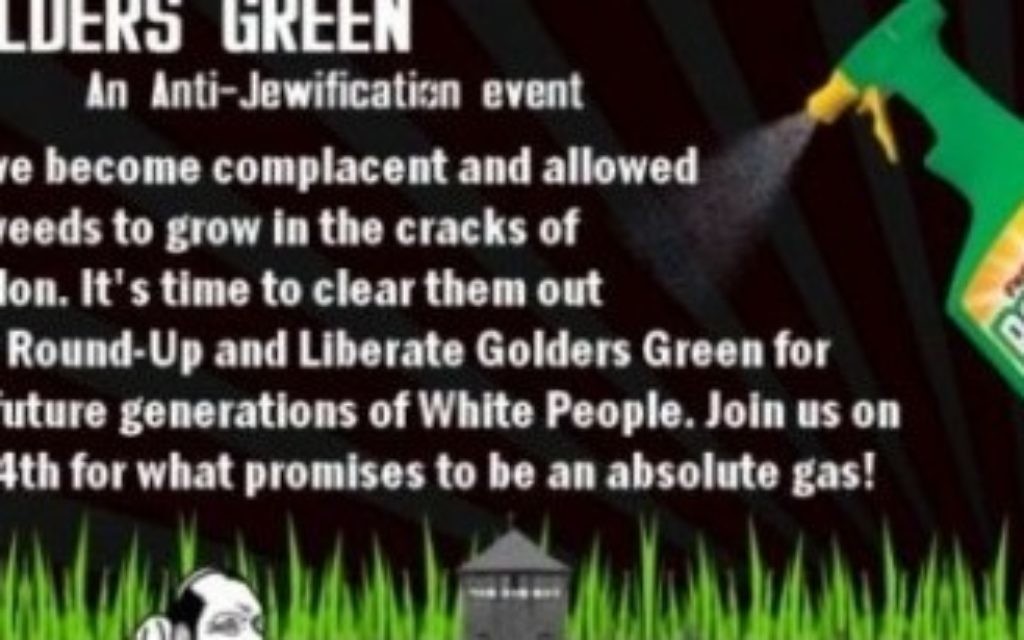 A blog post thought to be the subject of police complaints

A man has been charged with inciting racial hatred ahead of a planned neo-Nazi demonstration in London next weekend.

Scotland Yard said Joshua Bonehill, 22, of Hudson Road, Yeovil, was arrested last week by Avon and Somerset Police together with Met officers and charged yesterday. He will appear in custody at Westminster Magistrates’ Court on Monday.

The CST has confirmed that officers from the Metropolitan and Avon and Somerset police forces arrested the man in Yeovil this morning (Friday 26 June) on suspicion of inciting racial hatred -after a blog that depicted weedkiller being sprayed over Auschwitz-Birkenau and Hitler as an emoticon, as well as promising to “Liberate Golders Green for future generations of White People” (sic), was posted online by Joshua Bonehill-Paine – who was arrested in February over offensive tweets sent to the Jewish MP Luciana Berger.

One of the posts read: “Liberate Golders Green: An anti-Jewification event. We’ve become complacent and allowed for weeds to grow in the cracks of London. It’s time to clear them out with round-up and liberate Golders Green for future generations of white people. Join us on July 4 for what promises to be an absolute gas!”

The other, depicting a cartoon Hitler, described the hate rally – which has united the local community in a show of defiance against anti-Semitism – as “a party”.

It is the latest in a long line of hateful, Neo-Nazi web content linked to the July 4 demonstration outside Golders Green tube station, and the man – who has not been named – is currently being held by police in central London.

Bonehill-Paine has been vocal in the run-up to the protest, and last week claimed copies of the Talmud would be burned.

Writing online, he also claimed that “a few months in prison is absolutely no consequence”.

In November the Jewish News reported that Bonehill-Paine had been arrested in Somerset – and the far-right activist also appeared before Yeovil Magistrates in February to be sentenced over charges of malicious communication and harassment.

Earlier this month David Cameron warned that any demonstrators involved in anti-Semitic hostility at the rally planned for July 4 will face the “full force of the law”.

The rally is due to take place in Golders Green, north London, an area with a large Jewish population.