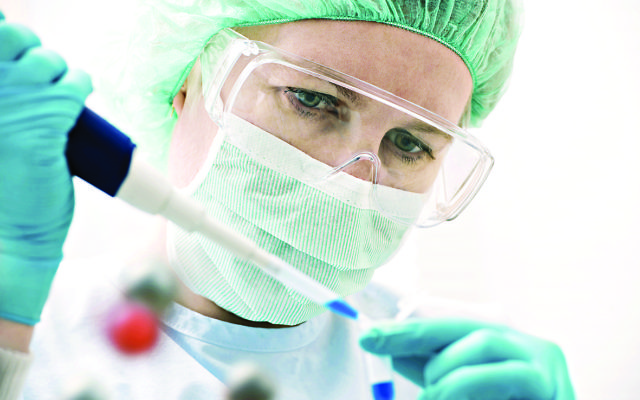 Working in a laboratory

An international research team studying the HIV virus in Africa concluded that male circumcision significantly curbs the spread of all its variants.

The six researchers of the study entitled “Male Circumcision and the Epidemic Emergence of HIV-2 in West Africa” published their findings last month in scientific journal PLOS one, the IPS news agency reported Monday.

Whereas “male circumcision is known to correlate negatively with HIV-1 prevalence in Africa,” they wrote of the most common variant of the virus that causes acquired immune deficiency syndrome, or AIDS. But studies examining this issue for HIV-2, the rarer variant found predominantly in Africa, “are lacking,” they wrote.

The researchers, working with state funding from Belgium, compiled on results from surveys on the prevalence of HIV-2 in 30 cities of all West African countries, and cross checked those with males circumcision rates of 218 West African ethnic groups, they wrote.

This study revealed that HIV-2 only formed early substantial focuses in cities with “substantial uncircumcised populations.” Lack of male circumcision in rural areas exposed to bushmeat – meat of wild animals, including primates, that are hunted rather than farmed — “may have had a role in successful HIV-2 emergence,” the researchers also wrote.

HIV-2 has been less studied than HIV-1, but is nevertheless a considerable threat to public health, since it has spread worldwide and is probably infecting more than one million people, the researchers noted.

Two studies demonstrated a strong correlation between HIV-1 prevalence in the late 1980s and male circumcision in Africa. Other studies replicated these findings for most developing countries of the world.

The study reaffirming the benefits of male circumcision comes amid an ongoing debate in Europe on whether the custom, when performed for religious reasons on boys younger than 18, constitutes a violation on their rights. Many opponents of the custom argue it carries no medical benefits.

In 2013, the Danish Health and Medicines Authority determined based on its own study that there was neither enough risk to justify outlawing circumcision nor enough documentation of its benefits to recommend the practice, which is performed on children both by observant and non-observant Muslims and Jews.

However, the American Academy of Paediatrics in 2012 said the benefits of male circumcision outweigh the risks, citing its reducing the risks of HIV infection, urinary tract infection and penile cancer.