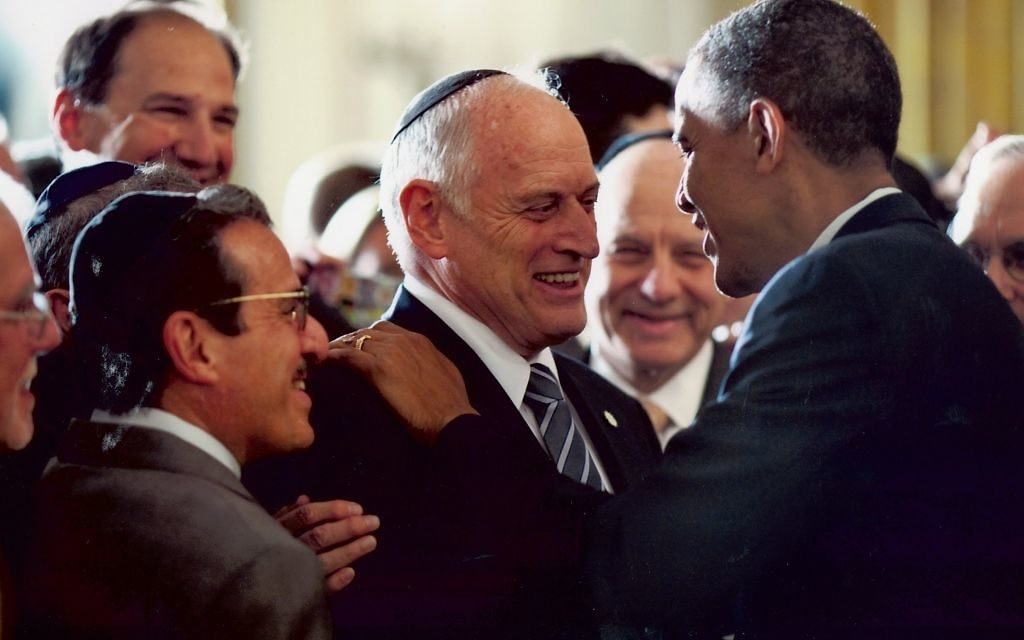 Malcolm Hoenlein’s business card must have words falling off the edges, given his title and the organisation he represents.

As executive vice-president of the Conference of Presidents of Major American Jewish Organisations, Hoenlein is arguably the world’s most powerful official Jew.

He travels from the US every three weeks, with a punishing schedule, and has unparalleled access to global leaders which depends heavily on Hoenlein’s mantra of never leaking the contents of his discussions.

Yet this Philadelphia-born Orthodox Jewish leader has plenty to say. The Conference of Presidents, as it is usually known, is an umbrella group of more than 50 US Jewish organisations, spanning the political spectrum, so Hoenlein has to tread a delicate line in articulating policy.

“I have a rule,” Hoenlein drawls, “I don’t deal with any [US] administration until they find out where the bathrooms are.” Thus he will not yet to be drawn on what might be the relationship between US Jewry and President Trump. 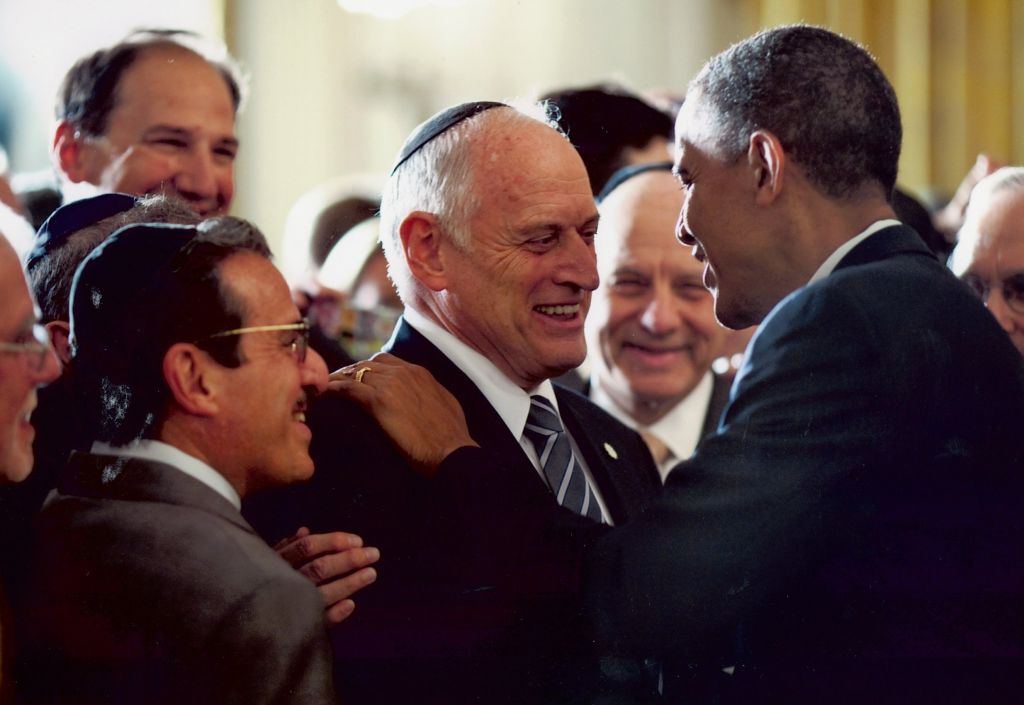 He believes the president cannot sustain the pace of executive orders that began his term. “The test is facing real world choices. We’ll have to see what is deliberate and what is the early White House trying to find its footing.”

As for Trump’s pledge to move the American Embassy to Jerusalem goes, Hoenlein has no doubts. “Everybody should recognise that this is correcting an historic wrong. But it has to be done correctly, and it has to be done smartly. It’s a huge operation and it’s going to take time.”

He says this a lot, that an issue has to be dealt with “smartly”. It’s obvious, talking to him that there is an unexpressed exasperation when either the American or the Israeli government  fails to do the smart or clever thing. 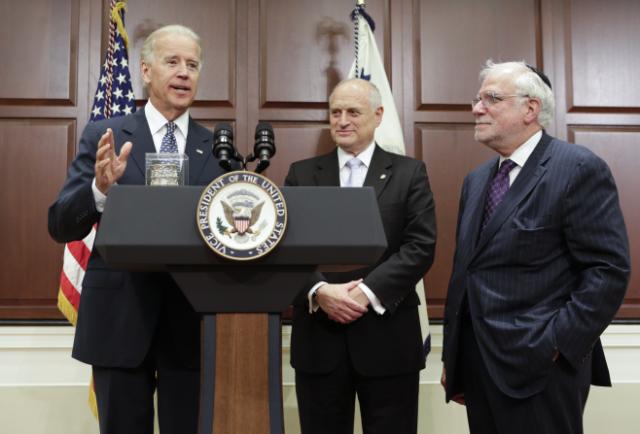 The Conference of Presidents of Major Jewish Organizations visits the White House on May 21 2012. Malcolm Hoenlein (centre)

When Hoenlein meets the new Trump administration, top of his agenda will be Iran — “not just the nuclear programme, but the other things, the violations of human rights, the missile tests…” He is keen to talk to Trump about “how we can build [links] with the dissidents of the Iranian regime.” He thinks it is important for the US to speak to its allies in the region.  “Send them messages to give them confidence to stand up against Iran and tell them we will be a reliable ally for them.”  One Muslim leader, he claims, “told me that by America’s actions [in the last administration] we were driving him into Putin’s arms. You can’t alienate people like that.”

He thinks discussions to bring Israel into a Mediterranean alliance would have a good reception in the Arab world. Some countries “are very critical of the Palestinian Authority, feel it’s a kleptocracy [and] recognise the incitement they’ve engaged in”. 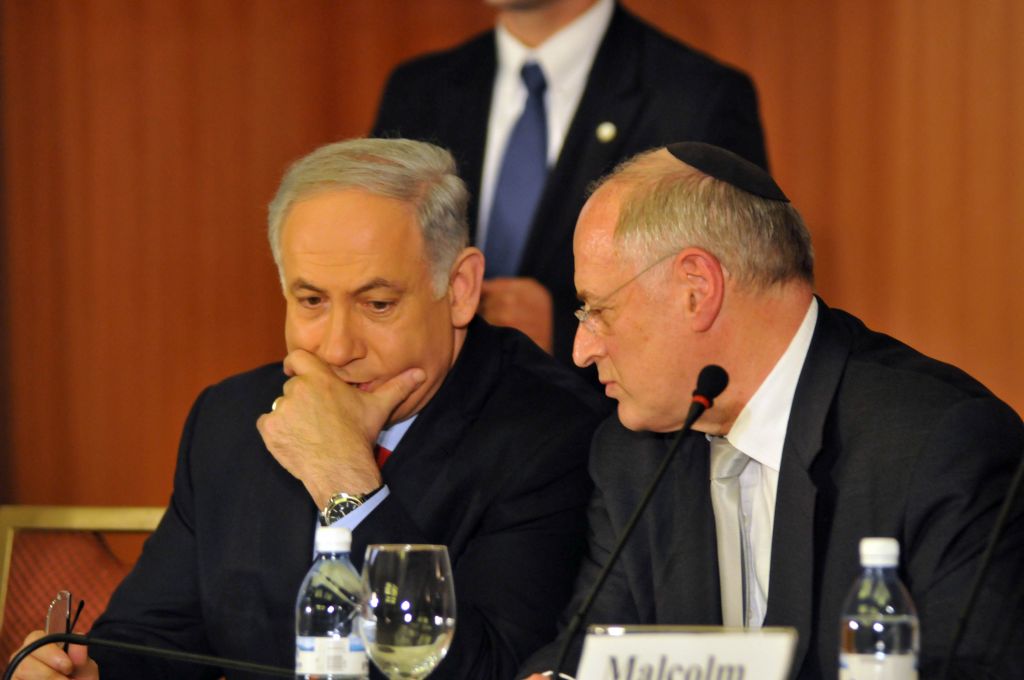 Hoenlein believes Iran remains the central problem in the Middle East. “You solve Iran and Hezbollah won’t be Hezbollah, Hamas won’t be Hamas, the war in Yemen will come to a close… there are so many issues that are directly related to Iranian support, involvement, and the goals of its regime. But I do not believe Iran could destroy Israel. I also believe strongly in working with the young people in Iran. There are ways to support them and undermine the regime.”

He’s all for presenting a “crazy-slash-smart” perspective. “That is, crazy meaning thinking out of the box. If people don’t know what to expect, it puts us in a better position, you have leverage.”

When he meets Arab leaders today, the way they talk about Israel “is very different from a few years ago. Israel is seen as a goldmine because of what it’s developed.” 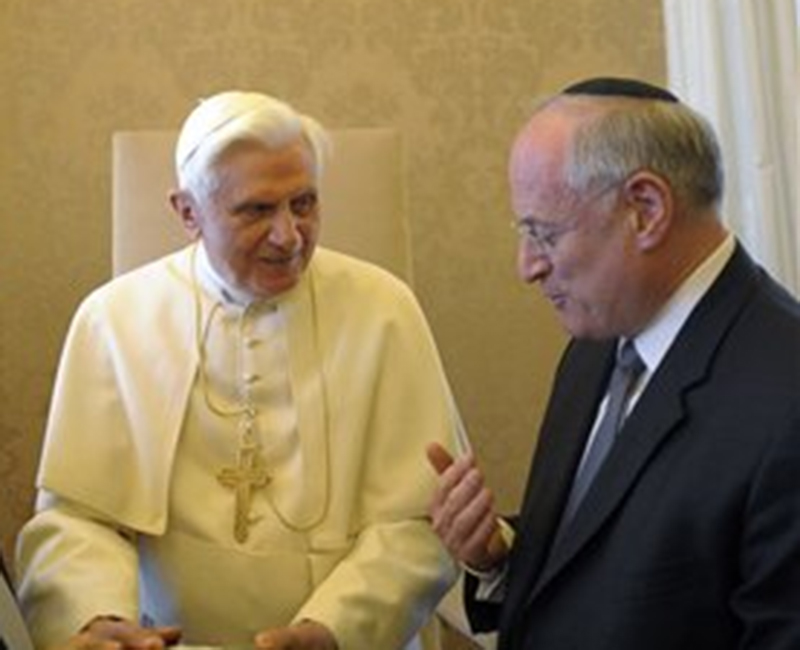 He won’t say everything is wonderful, “but more Israelis travel to these countries than people acknowledge. Arab leaders are concerned about the street, and decades of incitement will take time to root out. But things are changing”. Hoenlein smiles. “Loose lips sink ships, and people have meetings with us because they  know we will never leak anything. That gives them confidence to trust us.”

On links to the UK, he says: “I have great respect for many of the leaders here. We have worked closely with them and developed ties. Jonathan Arkush is a serious leader of the Board of Deputies. I spoke at a meeting there last week and we had a wonderful, meaningful exchange. We have a long-term relationship with the JLC and close relationship with CST. Our security in the US is modelled on what they do. Britain, in this case, was way ahead of us in the US and, I think, it still is.

“After this trip [to the UK] we will try and enhance the relationship with the country. My argument, for 15 years, is that we have to look to Britain as the model, not France, on dealing with anti-Semitism — because with France, anti-Semitism is always bottom up, in Britain it’s top down. I call it the poisoning of the elites — remember when the architects had that meeting? I said at the time, that’s the model, it’s not going to be grassroots antisemitism, but antisemitism from the top down.

On BDS Britain is always going to be the model for us to study. We have to work closely with other communities, and I always meet the local community, because they have to live with the aftermath. It’s easy for us to come in and throw [metaphorical] bombs, they have to clean up afterwards. “We can always do more if the community wants to come and join us. I don’t believe in treaties between Jewish communities, because we are all on the same side.”