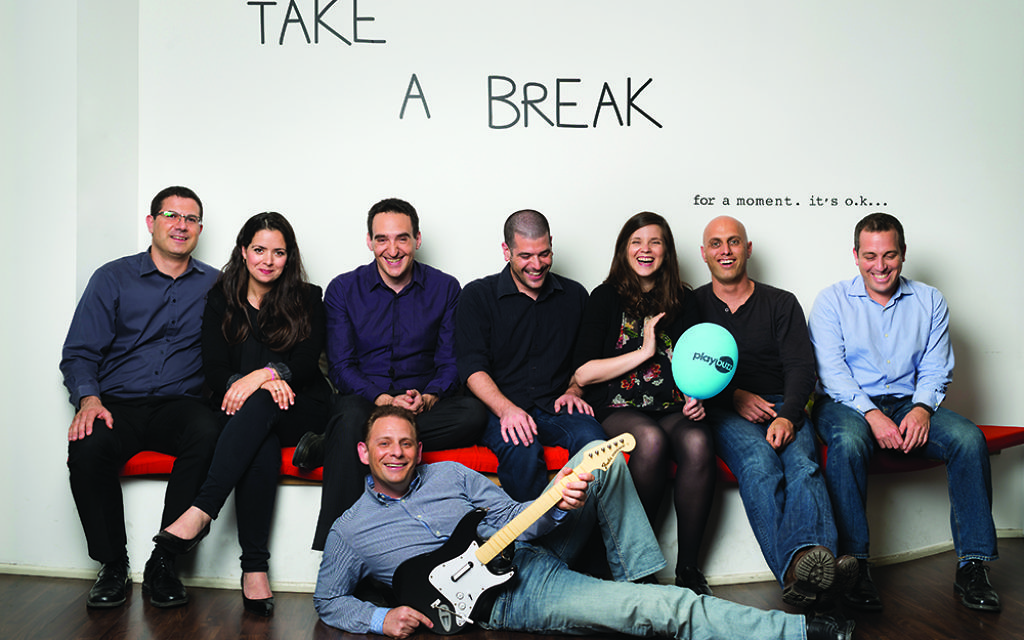 Jonathan Marciano reports on how London is abuzz with Israeli start-ups, delivering everything from buying shares to waiting for a bus.

The team at playbuzz, with its chief executive Shaul Olmert third from the left

The son of former Israel Prime Minister Ehud Olmert was in London recently as part of far-reaching expansion plans for his start-up, which is taking the publishing world by storm.

Shaul Olmert, CEO of playbuzz, made the visit following a rapid period of success at his Tel Aviv-based firm. During this time, the groundbreaking website, populated by user-generated quizzes, listicles and polls, has secured $19.8 million (£12.8m) in funding, has notched up more shares on Facebook than publishers such as the the Huffington Post and Fox News and is seeking a position as one of the world’s leading content publishing platforms.

Olmert told Jewish News that in common with a new wave of Israeli start-ups, newly focused on disrupting traditional consumer industries, UK expansion and growth is key to his long term expansion.

“We have gone from one million to 10m unique visitors in the UK in the past six months, through the website and key partnerships with publishers, such as Sky, The Independent, The Sun, Comedy Central, the Cabinet Office and many others.

We have just opened an office in London with a team of five employees in the UK and have plans to expand much further going into 2016.”
This new trend in the start-up nation has involved such hungry, cash-rich Israeli-based firms – always known for their hi-tech knowhow – creating a sudden wave of popular, simple to use products and services from Tel Aviv, Jerusalem or Ra’anana, in a content and format that UK consumers are lapping up.

The effects are transforming traditional UK sectors that have not changed in decades.

In publishing, playbuzz is becoming a household name (there is also Tel-Aviv based Apester, which generates online quizzes used by nearly all the UK’s online media).

While, in the world of taxis, Israeli firm Gett is shaking up London’s black taxi industry with its application booking service offering 30 percent off metered fares. In financial technology, there are any number of startups with their sights set on London (such as FeeX, or eToro) looking to take a crack at UK financial markets, transparency or investing, providing alternatives to outdated procedures and services.

This innovation is combined with stellar funding (Israel is second in the world in absolute terms for venture capital funding) to fuel an acceleration to the UK market, creating thousands of new jobs – and an opportunity for UK employees to work for some of the most exciting companies in the world. Last year, according to Israel’s Central Bureau of Statistics, trade between the two countries reached a record £3.9 billion – despite the summer conflict.

The UK government has been awake to this trend, with the UK-Israel Tech Hub, set up to foster commercial and technological ties, credited with creating 80 business partnerships between the two countries.

As part of this strategy, last month London’s Deputy Mayor for planning Sir Edward Lister led a delegation to the DLD Tel Aviv Innovation Conference, Israel’s leading hi-tech festival. The annual conference at the chic converted train compound in Tel Aviv (itself a metaphor for the remarkable transformation of the country), confirms the trend towards Israeli companies looking to scale more globally and successfully than in the past.

Expansion is benefiting from a heady mix of investment and hardened second or third-time entrepreneurs with a track record of companies under their belt, who are looking to build big rather than selling to competitors (the most eye-catching of which was navigation firm Waze being sold to Google for $1bn).

This road to opening offices and creating investment abroad is inevitable, according to Shahar Waiser, founder and CEO of Gett.

“Let’s face it, Israel has a very small local market which is a problem but is also an advantage,” he says. “From day one you have to be international so your product can be consumed in Germany France or the UK, which are big enough to ensure commercial success.”

The challenge is echoed by Saul Singer, who coined the term ‘start-up nation’ in his 2009 book of the same name, co-authored with Dan Senor.

“There is a big world out there, bigger than the US market, with bigger problems to solve,” he says. “It is easier for us to be less America-centred than it is for Americans. We have to be more aggressive about going into markets ou side the US.”

It is advice firms are heeding. Following the lead of companies such as playbuzz and Gett, a fresh wave of Israeli-born firms are beating a path to the UK to tackle everything from bus wait times, air analytics, football scores, fashion loyalty schemes, to the latest 3D printing.

For now, if there is a new consumer craze or buzz sweeping a UK industry, check out its origins: it may just be made in Israel.