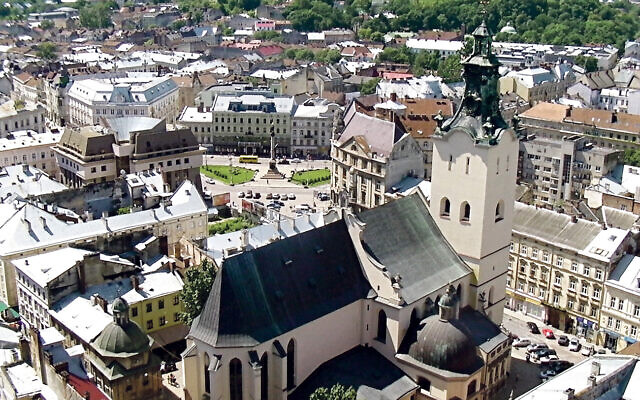 The view over the Cathedral in Lviv

Ukrainian researchers have finally found the secret chamber within a subterranean sewer network in which dozens of Jews from the city of Lviv hid during the Nazi occupation of the Second World War, writes Adam Decker.

The team, which included archaeologists, was inspired to find the chamber after seeing a 2011 Polish film about the families who were hidden there by Ukrainians who brought them food and drink, including beer, as well as toys for the children.

Holocaust survivor Krystyna Chiger was 11 when she hid in the underground annexe to a rainwater depository below Lviv’s Cathedral Square.

She has recalled the awful conditions in which she and at least 20 other Jews lived for months, until their rescuers could move them on safely, but not until disease had killed about 50 Jews.

“I was scared and shaking, but I tried to be calm and only asked daddy if we still had far to go.

“There were stones with yellow worms crawling all over. We put all our things over the stones and sat on top of them. It was awful there. Water seeped from the walls and it smelled bad.

I saw large, red rats, which ran by us. At first, I was very afraid, but later I got used to it.”

The researchers from Lviv University said they found both the chamber that housed dozens of Jews taking refuge as well as “relics” from their time there after watching In Darkness, an award-winning Polish historical drama about their survival.

Hanna-Melania Tychka, one of the archaeologists, said the finding was “surreal”, while digger Andriy Ryshtun said there had been “almost no places where people can stay for a long time… Water is flowing everywhere”.

He told local media that “the entrance to the left and right was walled up with blocks, so the chamber remained isolated”, adding that it was a rare remnant from medieval times that had been walled off and forgotten for centuries. “It could accommodate many people and we found clear evidence that people were hiding there from the Nazis,” he said.

A torch and nails had been driven into the stones to make rudimentary hooks, broken glass had been used to stuff holes to prevent rats from entering, and tons of earth had been used to conceal the annexe from the Germans, who were digging trenches nearby.