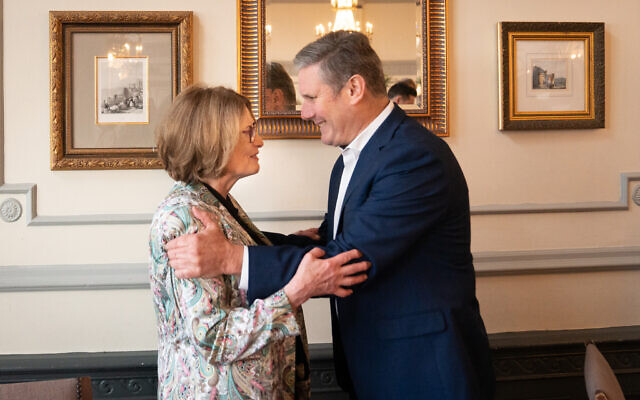 Labour leader SirKeir Starmer welcomes Louise Ellman to the Labour Party conference in Brighton. The former MP who quit Labour over its handling of anti-Semitism has rejoined following changes to the party's rules on discrimination. Picture date: Tuesday September 28, 2021.

Dame Louise Ellman has been appointed onto a Labour committee which will be significant in chosing experts to decide antisemitism cases.

The former Liverpool Riverside MP has been confirmed as one of the members of the Standing Recruitment Committee, which will be co-chaired by Crossbench peer Lord Bob Kerslake and Labour peer, Baroness Margaret Prosser.

Ellman announced she was rejoining Labour in September, after quitting ahead of the 2019 general election in protest at Jeremy Corbyn’s failure to tackle anti-Jewish racism.

Her involvement in the panel selections will ease fears amongst some communal organisations that Labour’s new disciplinary system may still be open to political interference.

The Independent Review Board and the Independent Complaints Board are new bodies being set up following the Equality and Human Rights Commission report into Antisemitism in the Labour Party in October 2020.

Their purpose is to ensure complaints are heard by experts from outside the Party and to restore trust and confidence, especially within the Jewish community, in the way grievances are handled.

The Independent Review Board will be made up of six lawyers who will review all protected characteristic complaint decisions taken by the Disputes Panel of the NEC, and the Independent Complaints Board that will have a dozen members including lawyers, HR, regulatory experts and lay members from the Labour Party who will hear appeals and sit for in-person disciplinary hearings.

The new bodies will be established in December 2021 and be fully up and running early in 2022.

Appointments to the Standing Recruitment Committee were made by the General Secretary David Evans.

This was agreed by the NEC and the rule change was passed at Conference in September this year. To ensure independence and transparency the Standing Recruitment Committee, working with a recruitment agency, will make all decisions on recruitment to both Boards.