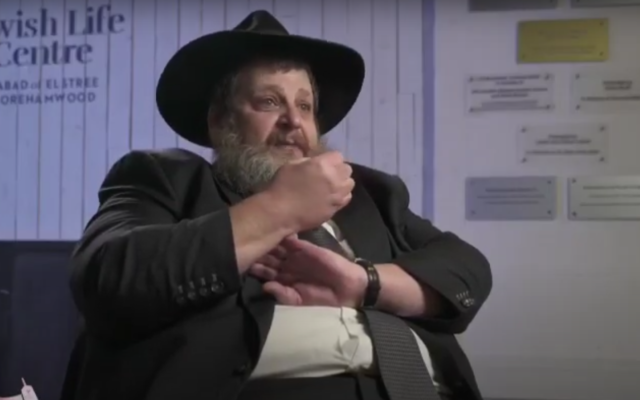 A new Sefer Torah is being inscribed after a Jewish man ‘miraculously’ survived from Covid.

The new Sefer Torah at the Jewish Life Centre in Borehamwood was initiated by Leah Mitz, who felt compelled to undertake the ‘Unity Torah’ project after her husband Dovid was hospitalised with Covid at the start of the pandemic.

Family were warned that he had only hours to live, and were called to the hospital in Barnet to say their last goodbyes – but Dovid pulled through.

The centre is now giving all Jews within the Borehamwood and Elstree area the chance to own a letter in the torah, which is being named after the late Chief Rabbi Lord Sacks.

“Our goal is to give the opportunity to every single Jewish person in the Borehamwood and Elstree area the opportunity to fulfill the mishloach of owning a letter in the Torah,” said Rabbi Chaim Hoch, who is one of the team of volunteers behind the project.

“We’re trying to bring the whole community together. We all might belong to different synagogues and affiliations, which is great, but we have this opportunity for all of us to share in the same Torah.

“It doesn’t take away from any of our communities or affiliations, but that’s the most important thing about this project.”

As Dovid seemed to take turns for the worse, Leah promised her niece that if he was to survive, she would begin a new Sefer Torah. “I had no idea where it came from, I just felt it and had to say it,” she said.

Miraculously, he managed to overcome the odds and leave the hospital in Barnet. “It was just the most amazing feeling to have him home,” she said.

The centre contacted a scribe to undertake the Sefer Torah, but he was unable to begin until November. Coincidentally, the day he began was the same day that Lord Rabbi Sacks passed away – so the Sefer Torah is dedicated in his memory.

“It happened to be the same day, that Shabbat, that former Chief Rabbi Lord Sacks passed away, sadly,” said Rabbi Hoch.

“And to me, I felt hours after this great luminary had passed away, our sefer Torah is just starting to get written.”

An estimated 14,000 Jewish people in the Elstree and Borehamwood area are now being offered the chance to ‘own’ a letter in the new Torah.

More details about the Unity Torah can be found on the Jewish Life Centre’s website at https://jewishlifecentre.org/unitytorah/