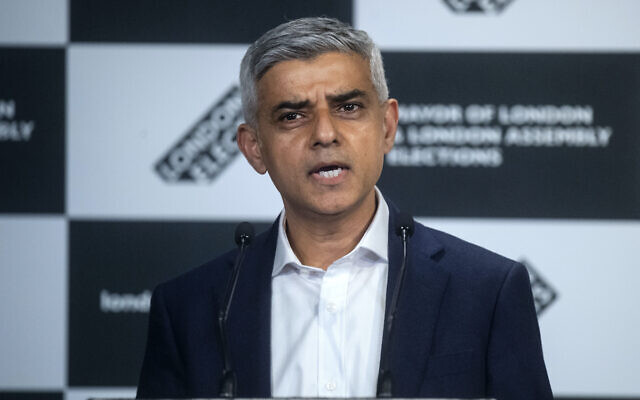 Labour's Sadiq Khan speaks after he was declared as the next Mayor of London at City Hall, London. Picture date: Saturday May 8, 2021.

The London Assembly has unanimously passed a motion calling for the Mayor of London Sadiq Khan and the Metropolitan Police Service (MPS) to commission and publish a specific strategy for tackling antisemitism in London following a recent rise in antisemitic incidents.

The move follows a dramatic rise in incidents of antisemitism in the UK since the outbreak of violence in Israel and the Palestinian Territories.

The motion passed on Thursday was proposed by Greater London Authority Conservatives Leader Susan Hall Assembly Member (AM) , who had said: “It’s no surprise many Jewish Londoners feel let down by our city’s response to the recent horrific scenes of antisemitism on our streets.

“Something has clearly gone wrong when mobs parading on our streets, and even a convoy of vehicles driving through a Jewish community, can freely broadcast their hateful, disgusting and violent views.

“The officer’s misguided action not only undermines the force’s impartiality but the Jewish community’s faith in the police. This cannot happen again.

“We need strong action to root it out. In the future, there must be a swifter police response with robust police action to keep Jewish Londoners safe.

“We cannot allow a repeat of the antisemitic demonstrations and displays we have seen recently in London.

“I hope the Mayor and the Metropolitan Police listen and act on the recommendations the London Assembly have made today.”

Labour’s Unmesh Desai AM, successfully proposed amendments to the original motion which stressed that “ultimately the power to ban protests lies solely with the Home Secretary, who should carefully scrutinise future requests for demonstrations to ensure a zero-tolerance approach against any antisemitic speech or imagery.”

The Labour AM said:” “We must all take a stand against antisemitism and some of the appalling scenes we have seen in London recently, which have left Jewish Londoners to feel insecure, unsafe and under attack.

“I have seen and been sent clips of incidents of the marches in Central London, with hard antisemitic statements being made. Sadly, the Met was standing by and saying nothing, and doing nothing.

“I understand that sometimes it is better for the Met to act afterwards and gather evidence, but this does send out the wrong signal, that they are scared to act, that they are losing control of the streets of London and pandering to the politically correct lobby.

“The appalling antisemitic attacks we saw on the Rabbi in Redbridge, and other antisemitic incidents need to be condemned unequivocally, no ifs and no buts.

“To the perpetrators of these attacks, I hope you are prosecuted if you’ve not already been arrested by the Police, I hope that you feel the full force of the law and that you are doing a grave disservice to the Palestinian cause, in fact, you are actually taking it back. Make no mistake about that.”

Since the outbreak of violence in Israel and the Palestinian Territories, incidents of antisemitism in the UK have risen by around 500% according to the Community Security Trust (CST).

One high profile incident in the last few weeks saw a convoy of cars covered with Palestinian flags passing through an area of North London with a significant Jewish population, with passengers heard to shout racist language and threats against Jews.

There have also been reports of incidents of antisemitism taking place in schools, prompting the Education Secretary Gavin Williamson to send a letter to headteachers on the matter.

Daniel Kosky, Director of the London Jewish Forum, together with Co-Chairs Adrian Cohen and Andrew Gilbert said: “We would like to thank members of the London Assembly for sending out a clear message that antisemitism is not tolerated in London.

“The appalling scenes we have seen across our city over the past few weeks has hit the community hard, but it was heart-warming to see the unanimous support the London Assembly has shown to the Jewish community today.

“We hope to see the contents of this motion implemented so that London can be a safer place for all communities.”