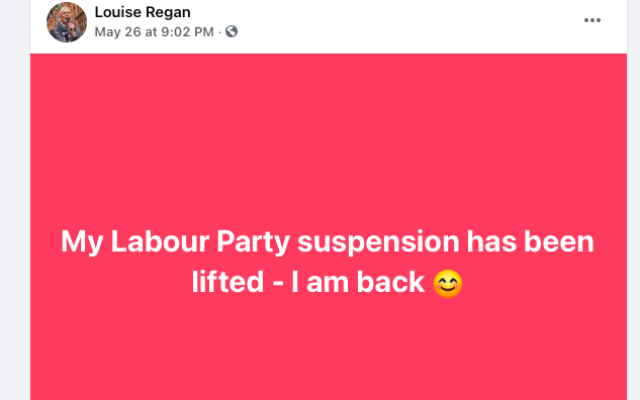 The chair of Nottingham East Labour Party, who was suspended over her handling of a meeting at which a Jewish member said the atmosphere was so hostile he felt he had to leave,  has claimed she has now been reinstated following an investigation.

Louise Regan, the CLP chair, had been suspended last November after allowing a motion in support of former Labour leader Jeremy Corbyn to be debated at a meeting.

Steve Lapsley, 50, a local Jewish constituent, who attended the local party meeting complained:“I have just left my CLP meeting after a man who abused me in front of witnesses was allowed to say without censure that he had never seen antisemitism in the party. The whole meeting is horrific.”

Multiple sources inside the meeting confirmed the intimidating atmosphere at the meeting.

Local MP Nadia Whittome, previously a staunch supporter of Mr Corbyn, also intervened twice to condemn the decision to allow the motion to be heard.

The MP added she objected to the motion, but was overruled by the chair. She also said the “atmosphere and tone” was “wholly unacceptable”.

Supporters of Ms Regan later released a statement claiming Friday’s meeting had passed without problems except with one speaker they described as a “notable exception.”

Labour confirmed Ms Regan – an National Education Union official – had been suspended by the party pending an investigation that same night.

She and her husband Ivan Wels, are both active supporters of the Jewish Voice For Labour (JVL) group.

In a post on her Facebook page Regan wrote on May 26: “My Labour Party suspension has been lifted – I am back.”

Two other local CLP sources also confirmed to Jewish News that they had been told Regan’s suspension was dropped – and that she had been elected to chair a forthcoming meeting.

But the two individuals confirmed that Nottingham East CLP have subsequently been contacted by Labour regional officers and told they cannot now stage meetings.

She also shared an article that claimed peaceful coexistence between Israel and the Palestinians is a “myth.”

Jewish News has contacted Regan and the Labour Party for comment.