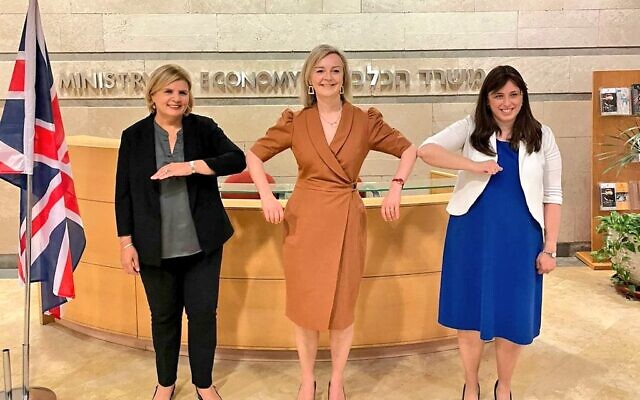 International Trade Secretary Liz Truss has hailed as “fantastic” a meeting with Israeli minister Orna Barbivai ahead of an expected advanced free trade agreement between the two countries.

The Secretary of State travelled to Israel this week for talks aimed at deepening trade ties with the UK, particularly in the tech, digital and data sectors.

On Wednesday she said: “It was fantastic to meet the Trade and Economy Minister Orna Barbivai.

“As two democratic free trading nations, both with thriving technology industries, I’m looking forward to deepening the historic ties between the UK and Israel.

“Together we will work to remove barriers to trade between our two countries and work towards an advance free trade agreement that supports jobs and drives growth.”

Truss had previously expressed the UK’s desire to boost trading relations with Israel at a meeting with ambassador to the UK Tzipi Hotovely in London last month.

???? Our forthcoming advanced free trade agreement
???? Deepening trade ties in industries of the future like tech, digital and data
???? Building on our £5bn trade relationship???? pic.twitter.com/ZSzag3nJ5I

The Trade Secretary flew to Israel earlier this week with a delegation that included Lord Austin of Dudley, the former Labour MP, and now the Prime Minister’s Trade Envoy to Israel.

The UK team visited Yad Vashem during their short trip to Israel.

Lord Austin later posted a photograph on Twitter of himself watching England’s Euro 2020 clash with Germany at a beach venue in Tel Aviv.

After Brexit the UK agreed a Free Trade Agreement (FTA) with Israel based on the existing FTA between Israel and the European Union.

The UK is seeking new global trading partners after detaching itself from the EU, and is aiming to build on a £5 billion trading relationship.

Watching the game on the beach at Tel Aviv.
There are worse places to watch football. pic.twitter.com/iKEOhb9PDg