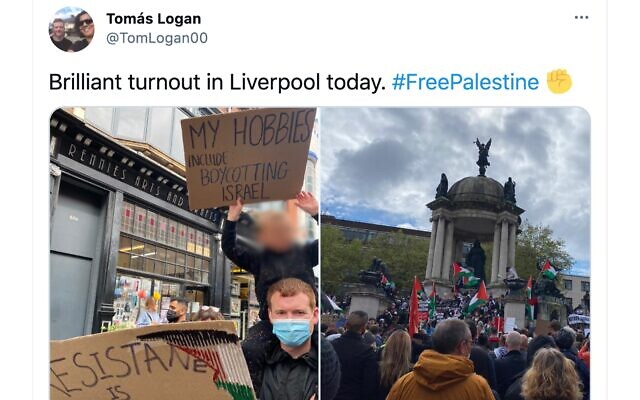 The newly-elected mayor of Liverpool has promoted a Labour councillor who posted a picture of himself carrying a child last weekend with a banner saying, “My hobbies include boycotting Israel” as head of education in her new cabinet.

Joanne Anderson was elected earlier this month as the new Labour mayor of the city, replacing Joe Anderson (no relation) who had stepped aside following his arrest in December.

In a bid to assert her authority in her new role, Anderson has confirmed that Tom Logan, who represents the ward of Princes Park as a Labour councillor, will be handed the education and skills brief.

On Saturday, Logan tweeted a photo of himself with a child on his shoulders.

The child, held aloft a cardboard sign reading: “MY HOBBIES INCLUDE BOYCOTTING ISRAEL.”

A cardboard sign in front of Doyle himself, read: “RESISTANCE IS JUSTIFIED WHEN PPL ARE OCCUPIED.”

Logan is believed to have attended a pro-Palestinian demo in the city that same day.

Mayor Anderson added:”This is the beginning of a new era at Liverpool City Council and I am hugely excited and very proud to be leading the team.

“I was keen to appoint colleagues who hold a passion for their portfolios who bring with them knowledge and a wide range of experience.”

Liverpool’s King David High School, which follows a Jewish ethos, is among those communal establishments to have increased its security following heightened tensions over the conflict between Israel and the Palestinians.

Meanwhile, a further appointment in Mayor Anderson’s cabinet is Riverside Labour Councillor Sarah Doyle, who will take the cabinet role for development and economy.

In 2019, Doyle apologised for a series of tweets she sent including one in 2013 which used the phrase ‘typical Jew’, while another from 2014 said “Hahahahahaha you jew.’

Doyle said: “When I was 17 and in school, before I was a Labour Party member I tweeted a naive comment.

“With the education I have received since joining the Labour Party, I now realise that the comment was ill-judged and unacceptable.”

Responding to the Liverpool mayor’s appointment of Logan the Tory peer Lord Polak said:“The promotion of Labour Councillor Tom Logan by Liverpool’s Mayor to oversee the council’s important education and skills brief must be questioned in light of images purportedly showing him with a child holding a banner proudly promoting divisive and racist boycotts of Israel.”

Conservative Friends of Israeli honorary president added:” As a proud Scouser, I worry about the divisive message this will send to the children of the city, especially those at King David Primary and Secondary Schools – where as a former pupil we only experienced tolerance and understanding. The move is particularly ill-judged at a time when the UK’s Jewish community faces a dangerous spike in Antisemitic incidents. People in positions of power should set an example by finding ways to unite a city not divide it”

Mayor Anderson has told the Liverpool Echo newspaper she would be building a new top team as she attempts to steer the city and the council through a turbulent period following the devastating Max Caller inspection report that revealed a host of failings at the local authority.

Jewish News has contacted Mayor Anderson for comment over her appointments and Cllr Logan over the wording on his banners.