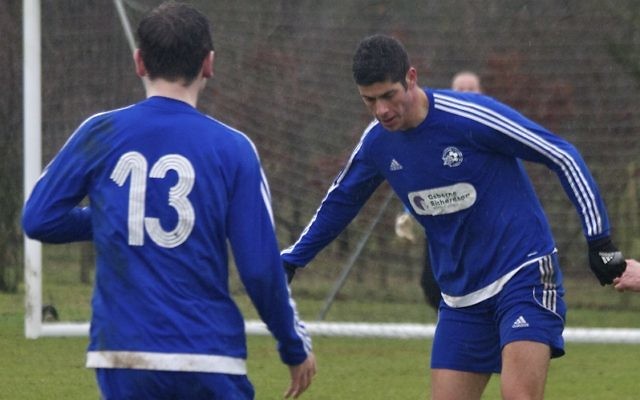 London Lions reached their second cup semi-final of the season as they humiliated their closet league rivals Belstone 10-2 in the quarter final of the Aubrey Cup.

With no recognised goalkeeper due to injury and sickness, manager Andy Landesberg had no choice but to use vice-captain Andy Glynne between the sticks.

The game started at a frantic pace with Belstone looking the most likely side to score and during the opening stages it was the away side who were dominating proceedings.

After 15 minutes Lions broke away down the left hand side and good play between Adam Burchell and James Gershfield found skipper Josh Kennet who rolled the ball into the net for 1-0.

No more than five minutes later, a long raking ball from centre-half Goldberg found Gershfield to score his first of the afternoon 2-0.

It became 2-1 when the Belstone left winger beat Adam Lipman to deliver a cross into the box for an easy tap in for the oncoming forward.

Lions were not rattled by this and went straight up the other end to make it 3-1, a superb piece of skill from Austin Lipman found Gershfield to score his second of the day.

Number four soon came along after after a beautiful weighted ball from Jake Furman into the path of Kennet who blasted past the keeper.

Gershfield then completed his hat-trick in some style, Austin Lipman’s ball into Gershfield’s feet who was on the edge of the box, but he managed to turn and swivel and smash a low shoot into the corner of the net to take him to 41 goals for the season.

With still only 40 minutes on the clock, a wonderful team goal was finished off by a Burchell bullet header after being picked out by captain Kennet, to make it 6-1

The second half started much slower than the first but after 10 minutes Belstone were awarded a penalty after Lions left-back Charlie Rubin brought the attacker down in the box, Belstone’s number 10 stepped up and made it 6-2.

Lions made three changes, Max Kyte, Adam Arnold and Rocky Spitzer replacing Gershfield, Burchell and Furman. This had an instant impact when Kyte scored his first of the afternoon to make it 7-2. Kyte then got a second after the keeper clearance fell into the path of Lions striker who chipped the ball into an empty net. Last season’s top scorer then completed his hat-trick and Lions 9th when he beat the keeper with ease.

With just two minutes to go, Belstone’s misery was complete after Kyte unselfishly rolled in Austin Lipman to make it ten. The team will now face Hatfield Social or Lemsford in the semi final.

Lions coach Darren Yarlett said: “To be honest I am lost for words. I expected us to win today but not like this, the boys were absolutely ruthless, probably the best I’ve seen in my time here. I have seen us play better, but the difference today was our forward players, they were superb.

“Today’s game was the start of a very important run of games for the club, we now have a week to prepare for our Herts Centenary Trophy semi-final vs Bishop Stortford Swifts who we know are a very good side, we will need to be at our best if we want to get into the final.”