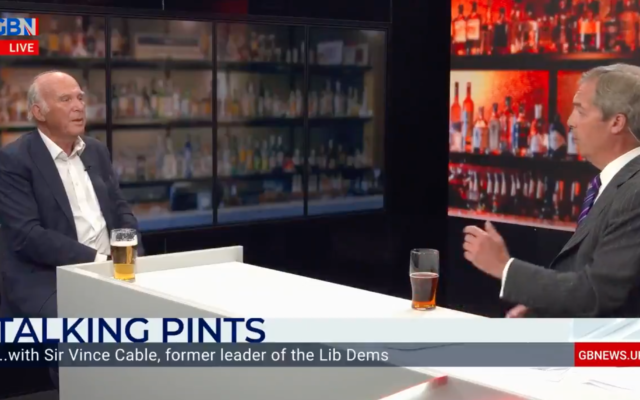 Sir Vince Cable has been criticised by the party he once led, for saying that accusing China of genocide against Uyghur Muslims is “hyping the language”.

The 78-year-old former MP made his comments on GB News during the ‘Talking Pints’ show hosted by ex UKIP and Brexit Party leader Nigel Farage.

This comes after Jewish News led a series of campaigns to raise awareness of the plight of Uyghurs. It is thought that up to one million of the minority are held in ‘re-education’ camps, with claims of forced labour, forced sterilisation and families being separated.

Speaking on GB News on Monday, Cable told Farage: “The use of the word genocide is not right. There is terrible human rights abuse in many countries of minorities – and China is one of them. They have abused those minorities for sure. But calling it genocide is hyping the language”.

ICYMI: Vince Cable told Nigel Farage that 'the use of the word genocide is not right here' when it comes to China's treatment of Uiyghur Muslims.

At the end of June, Cable wrote a piece in the Independent marking the 100th anniversary of the Chinese Communist Party. He said, “genocide allegations are particularly horrific” and the “alleged ‘genocide’ does not involve evidence of mass murders, let alone the wholesale “ethnic cleansing” of minorities”.

Liberal Democrat MP Alistair Carmichael criticised Cable, who led the party from 2017-19, saying: “Vince was a long standing colleague whose views I always valued especially on the economy.

“But on this he is wrong.

“There is clear cut evidence of a genocide in Xinjiang Province and we cannot sit idly by while the Chinese government commits atrocities against the Uyghurs.”

Campaigner Rahima Mahmut, U.K. Project Director for World Uyghur Congress said: “Cable accuses us as Uyghurs of ‘hyping’ the language. Millions of us are in camps, our women are sterilised, our language banned, our mosques demolished, our children stolen. That’s not hype, it’s a genocide.

“The real question is why Vince Cable feels the need to downplay the crimes when he should be standing in solidarity with uyghurs.

In March, following a series of votes on the genocide amendment to the trade bill, a compromise was reached so a committee can “identify credible reports of genocide and insist on a parliamentary debate”.