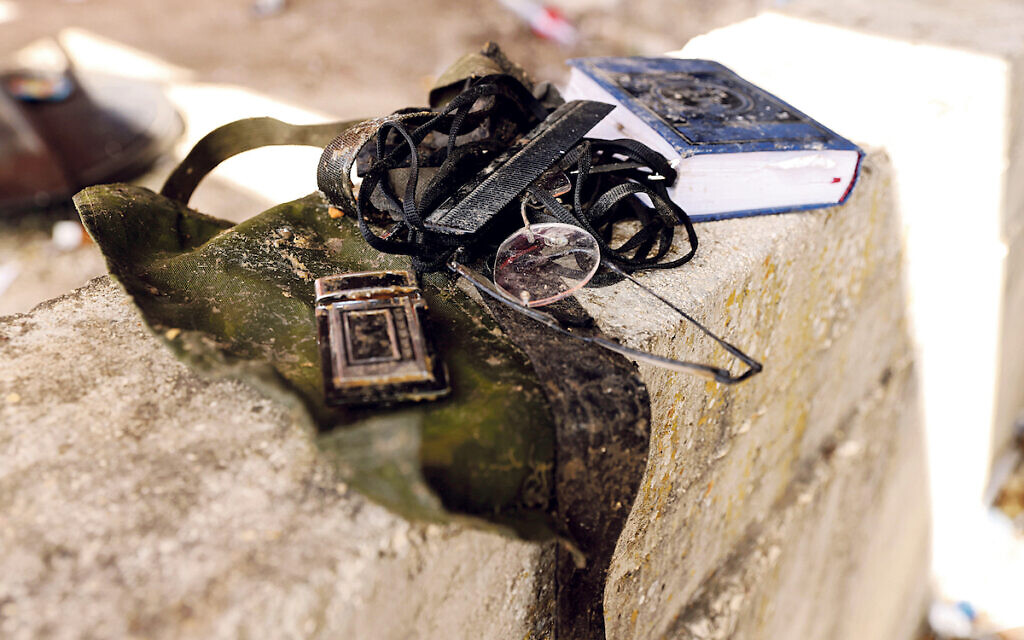 Personal belongings of Orthodox Jews can be seen on Mount Meron, northern Israel, where fatalities were reported among the thousands of ultra-Orthodox Jews gathered at the tomb of a 2nd-century sage for annual commemorations that include all-night prayer and dance, April 30, 2021. REUTERS/ Ronen Zvulun

Offended by your editorial

I was disturbed by your editorial of 6 May on the Mount Meron disaster. The premature apportioning of blame on the victims by stating the loss of Jewish life was caused by recklessness and negligence of the attendees echoed sentiments of The Sun newspaper scandal following the Hillsborough disaster in 1989.

Moreover, before an investigation is completed, and while the jury is out, it is highly inappropriate and reckless for a newspaper to pass judgment, especially as there are multiple witness accounts that the police had, this year, set up barriers. Why did Jewish News not report this?

It is similarly bizarre that Jewish News questioned the decision of those wishing to attend based on a tragedy that occurred at the site 110 years ago. With that reasoning, it would be reckless to attend many venues in and around Jerusalem and Tel Aviv’s city centres as a result of the tragic bombings that occurred in them just a mere 20 years ago.

Jewish News went further to question whether the Charedi community would have obeyed a plan to restrict numbers. Yes, they would. Just as they obeyed restrictions ongoing at the Western Wall over much of the past year.

But most disturbing was the vicious attack on Charedim towards the end of the piece. Jewish News asserted that “many of those” (obviously referring to Charedim, as per the preceding paragraphs of the piece) haven’t got the “remotest interest in rulings created by ‘the Zionists’’ who they talk about so disparagingly”. This is simply offensive.

The fight is constant

Israel is suffering once more. As the rockets go out, hitting our precious citizens in Ashkelon and Jerusalem, we think of the families and children living on the borders with Gaza who rush, again, to their sealed rooms.

Those youngsters in the army, including my grandchildren, must be receiving orders to be vigilant should more attacks occur. Two weeks ago, with the Mount Meron tragedy, we thought, “enough suffering”. As we come out of Shavuot and look forward to the next festival we pray – “let there be light from darkness”. Our land has to be fought for constantly.
Let’s pray for peace.

Peace is a pipe dream

The massive number of rockets fired on Israel from the Gaza Strip shows how open it is, that Iranian money is pouring into it, to pay for all these thousands of rockets, while all the time complaining that they have no power, or proper sanitation, and that Gaza is a prison.

Gaza has now shown what happens when the Palestinians control their own land; any sort of trust for peace is shown for what it is – a pipe dream.

The government has legislated that we must all wear face masks against Covid, as if it is a moral duty. We should always make our own moral judgments and, as Jews, being agreeable to a government issuing laws on morality has ramifications.

Take two of our pillar practices: brit milah and shechita. There will come a time in this country, as is evident already in other European countries, when the questioning and restricting of both will be commonplace on moral grounds.

For those concerned with the legal compliance aspect of mask wearing, having readily acceeded to the government’s ability to pass laws on supposed moral grounds, at what point before the government opposes brit milah would they limit its ability in making such judgments?

This is not remotely comparable with the laws of mask wearing, but is just a few stops along the same track; the common ground is in the government’s ability to legislate on supposed moral standards.

We should be wearing masks as it is the moral thing to do, not because other people have commanded us to do so.

It was unfortunate that Sadiq Khan was re-elected as London’s mayor in the recent election for City Hall.

Readers may recall that, back in 2015, Mr Khan was one of the former Labour leader Jeremy Corbyn’s original sponsors to become leader of the party. In the 2017 general election, he even tried to convince British voters that Corbyn should be elected as our prime minister.

A small group of provocateurs centered on Herut UK seem bent on presenting themselves as heroes and Israel’s greatest allies in the country by attending and disrupting various pro-Palestinian actions. This is not the case. If they were the committed Zionists they purport to be, they would have made aliyah and, if young enough, volunteered to serve in the IDF. That would be true courage over shouting at other activists.

I’ve been a Zionist for nearly 60 years but am losing my faith. As I understand it, the present troubles stem from the threat of eviction of Palestinian families from their homes in East Jerusalem. This stems not from officialdom but from families of the previous owners of the properties involved.

The justification is that these homes were lost to their Jewish owners at the time of partition, but now that they are once again in territory controlled by Israel rent should be paid for their continued occupation. No rent has been paid. On the basis of this non-payment, the eviction notice is/was due to come before an Israeli court, but that hearing has been postponed.

So far so good, but there is a serious catch: whereas Jewish/Israeli owners may claim back property that passed into Arab hands at the time of partition but is now situated in Israeli controlled/occupied areas, Palestinians may not claim back property previously held by their families but which is now occupied by Jewish Israelis. That’s how I understand the situation.

So I’m struggling here. I understand why Palestinians cannot claim back their land. During the latter half of the 20th century, some 800,000 Jews lost their homes and their livelihoods in Muslim lands. There was, in effect, a population exchange. This for me has always been the justification for the continued existence of Israel. Hundreds of thousands of Jews fled to Israel, and hundreds of thousands of Palestinians fled and ended up in refugee camps.

This cannot be undone, any more than Pakistani lands can be returned to their former Hindu inhabitants or Indian homes be returned to their former Muslim owners. If the justification for the existence of the state of Israel is that there was such a population exchange, entailing the exchange in ownership of property, then it is arguable that such an exchange should be maintained. It seems to me that evicting families is not in the spirit of such a policy.

Even if I’m mistaken in my analysis of the legal background, is Israel’s response proportionate? Or sensible? This is about a handful of families facing eviction and has led to rockets landing in Tel Aviv and massive and tragic slaughter in Gaza. When the first rockets were fired, was it already too late for Israel to offer concessions to the families facing eviction? Was it impossible to offer talks to Hamas? Was it too late for a rethink of the law? I despair. Where are our wise men? Where are we heading?