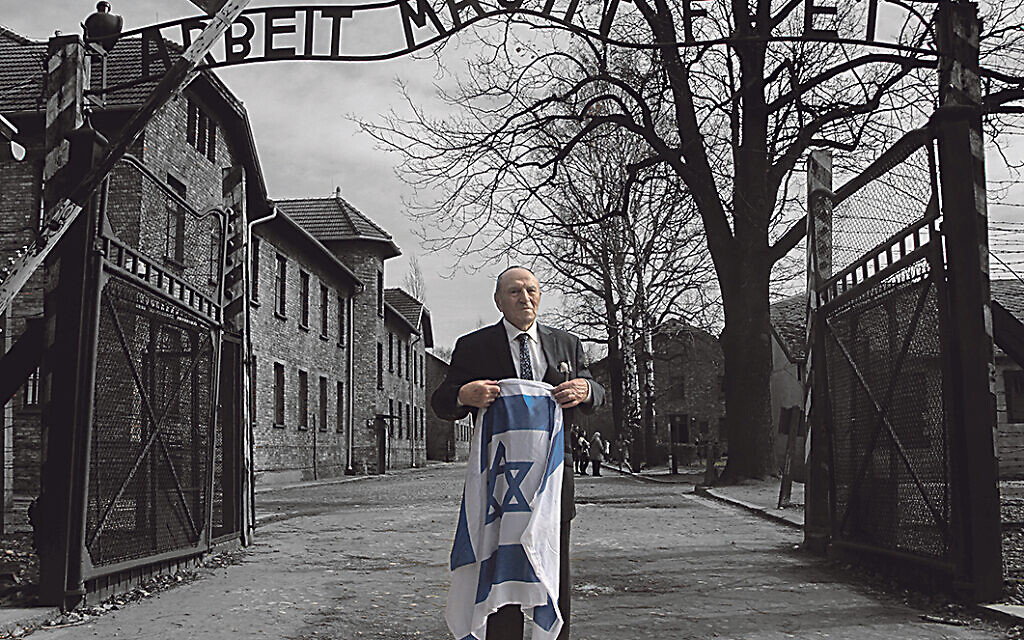 Leslie Kleinman was one of eight children born into a strictly-Orthodox family in May 1929 in Ambud, a small village near Satu Mare in Romania.

He was the sole survivor of 68 family members transported to Auschwitz in April 1944. In the space of a year, he endured the notorious Auschwitz-Birkenau death camp, the brutal forced death march setting out from Birkenau, eventually arriving in Sachsenhausen, followed by Flossenbürg, during which time he said he thought he walked some 300 miles in freezing winter conditions.

Leslie would attribute his unusually tough and resilient nature to his impoverished yet adequate, principled and happy family upbringing.

Seventy-five years later, his eyes would well up on mere recall of his loving “mama Rochel”, whose resourcefulness would stretch one chicken to feed 10 mouths for a week, the soft counterbalance to his austere Chasidic father, who was the devoted religious functionary for a number of small surrounding villages.

Aged 15, having been incarcerated and branded like an animal in Auschwitz-Birkenau, and having lost all family and communal connection, Kleinman would recall his feeling of loneliness and the pact he made with the God he abandoned early on his journey. 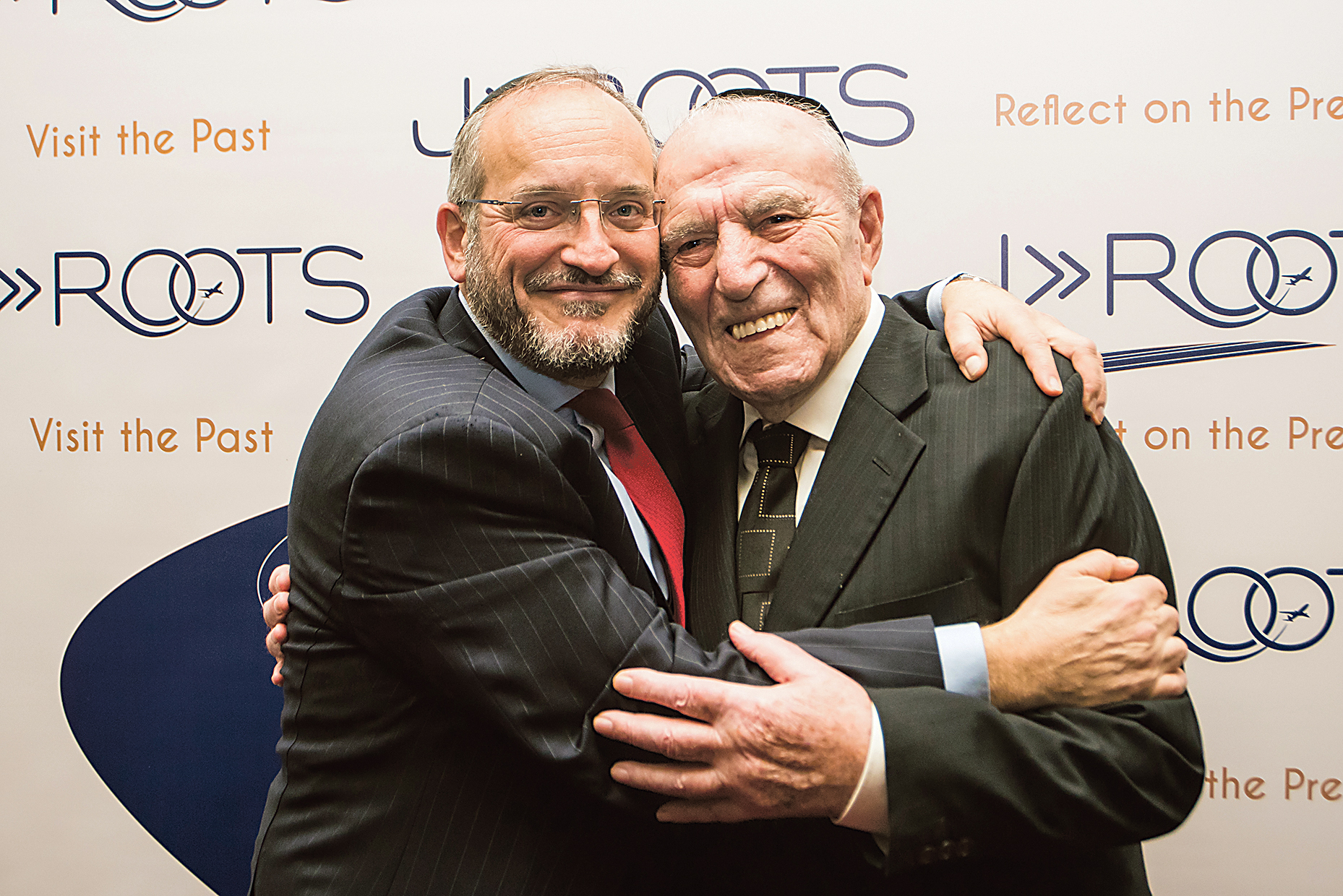 Leslie with Rabbi Naftali Schiff at the
premiere event for #A8230, A Legacy of Love (Blake Ezra Photography)

Exposed to the elements in Sachsenhausen and facing the spectre of death, he made a promise to that God that if he would “be my friend” and bring him through the ordeal, he would return to study in yeshiva for a year after the war.

A mark of Leslie’s personal integrity was that when he eventually arrived in the UK, he turned down the alluring offer to study English and a profession in order to fulfil this personal pledge.

After Sachsenhausen and Flossenbürg, Leslie and the few remaining prisoners were sent on a second death march in the direction of Dachau. During the march, suddenly all of the Nazis disappeared and Leslie was liberated by American troops. He spent the next eight months recuperating in an American-run hospital followed by a monastery, eventually joining 700 others later known as “The Boys”. 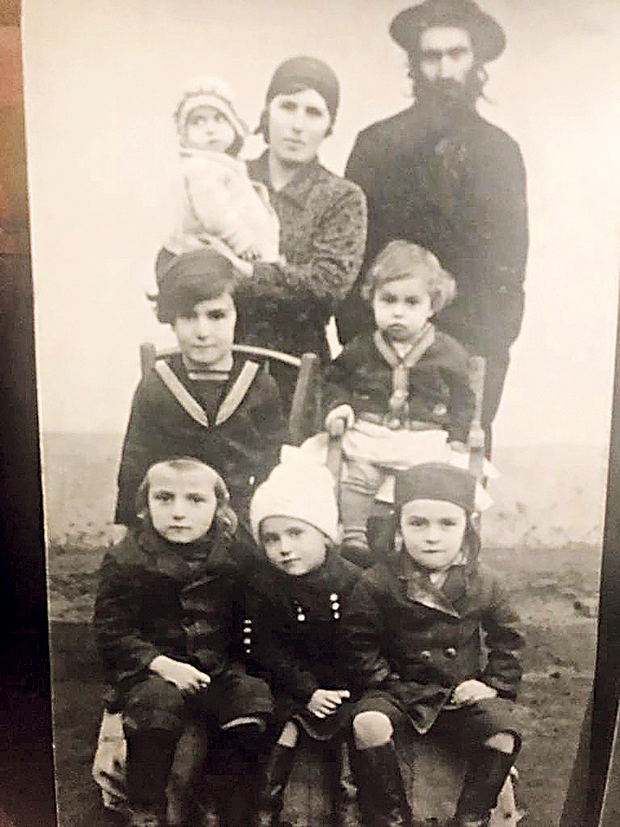 Leslie, left, with his parents and siblings

He was flown to Britain to start a new life, a planet away from both his Orthodox upbringing and the hell of the camps.

After a few years, he had learned a trade, started a business and was beginning to stand on his own feet. He relished his new-found freedom and embraced life to the full, often frequenting the dance halls and social clubs of London, where he met his first wife Evelyn.

Like many Holocaust survivors, Leslie drifted far away from the strict Jewish upbringing of his youth. Evelyn was a German gentile who came to the UK as a nanny and a nurse and was opposed to the Nazis. They had two children, Rosalyn and Steven.

Evelyn suffered from ill health, leading the two of them to opt for early retirement and move to picturesque Vancouver, Canada.

After 48 years of marriage, Evelyn passed away. Leslie would recall how, on her deathbed, she told him to return to his Jewish roots. He would half- joke she was a deeply spiritual person who was directing him to discover JRoots, the educational organisation that latterly facilitated his rediscovery of all things Jewish and his becoming a teacher and guide on many journeys back to Poland.

Having learned of the Jewish retiree population of Westcliff and Southend, Leslie’s children arranged for him to relocate there from Canada where, within a short time, he was welcomed by the Jewish community and met Miriam, whom he would later marry.

Facilitated by the Holocaust Educational Trust, Leslie began sharing his experiences in schools and colleges across the country.

Within a couple of years, he had encountered the Orthodox Rabbi Bar of Southend and Westcliff (who welcomed him back to synagogue), married Miriam, the widow of another Holocaust survivor, and been introduced to JRoots. These events served to reignite the Jewish spark that lay dormant for so many years.

Once that Jewish spirit had been stirred, Leslie was unstoppable. He enthusiastically led tens of journeys to Poland with JRoots and became the Zeide, mentor, confidante and teacher to literally thousands of young Jews.

Memories of his childhood, customs, teachings and stirring Jewish tunes all surfaced almost with a vengeance. Leslie’s default response to any invitation or opportunity to share his experiences and lessons learned with young people in particular was with open hearted and resounding readiness to give his all.

He was honoured by the Queen a couple of years ago for his selfless contribution to Holocaust education in the UK. He was proud of and thankful towards the country that had provided him with so much and relished the opportunity to give back. His messages were often of a universal quality and relevant to all.

Perhaps Leslie’s most enduring lesson is that which forms the title of the JRoots documentary about his remarkable story, #A-8230- a Legacy of Love.

If Leslie had only a few minutes to speak, he would briefly share his story, roll up his sleeve and point to the number tattooed on his forearm by the Nazis. He would relate how, later in life he realised the gematria (numerical value) of his tattooed number adds up to 13, which is equal to the Hebrew words ahava (love) and echad (one). His message was unequivocal: “I do not hate anybody”; “We must all work to love one another”; “We must work to be united, to be one.”

Having travelled the longest journey himself, Leslie’s latter years were perhaps an awakening of sorts, a “coming home”. They were years in which Leslie spoke from a place deep in his heart to Jewish people young and old, near and far. He sang and he danced, he joked, he prayed, he laughed and he taught.

“We are all one big family – you and I – even though we’ve only just met. Jewish people are just one big Yiddishe family. Each of you have got such treasures in your knapsack – don’t throw them away. I nearly did. Thank God I didn’t and I can tell you, being Jewish – it’s the best thing in the world.”

Thank you, Leslie Kleinman, #A-8230, for sharing with us your unique legacy of love.

u Rabbi Naftali Schiff is chief executive of Jewish Futures, co-founder of JRoots and director and producer of #A8230, A Legacy of Love (available to view on JRoots Journeys on Facebook)