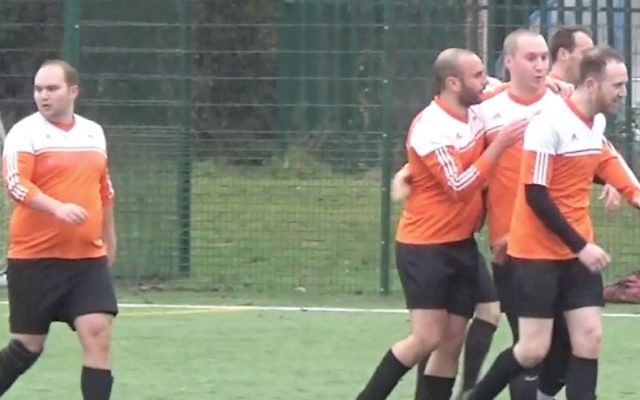 L’Equipe player-manager Nick Stern says his side are the best in Division Two after he saw them open up an eight-point lead at the top of the table as they claimed their tenth league win of the season.

Goals from Max Martin, Andy Smith and James Mandell, together with an own goal, saw them beat Catford & Bromley 4-0, with Stern saying: “At the moment we’re the best team, as we are top of the league, but nothing more than that. I’m thrilled with how it has gone so far, but that’s it, so far. We look forward to a nice break and getting back to league action next month.”

The first team to have claimed a tenth league win of the season, Stern’s obviously delighted with the first half of the season. “Ten wins from 11, still unbeaten in the league, to be honest I couldn’t be more happy”, he said. “It’s a result driven game and to be sitting top of the league at this stage of the season is something that I’m so proud of.

“I’m so proud of my players and being the first to 10 wins in our tenth season is pretty special. However, I would say we are not playing to our full potential yet. We have the potential for a couple more signings in the pipeline; I’ve been able to play my full strength side only once or twice this season and to be honest, I’m just excited as to what the second half has in store for us.

“While I’m confident for the rest of the season, all I’m thinking of is Raiders in our next game. The attitude is one game at a time and if we continue to win then we will win the league. However, once more, we’re taking it one game at a time. We’re only half way there, we now have a well-earned rest before the second half of the season when we know we will have real challenges on our hands as we aim to bring silverware to L Equipe for the first time.”

Reflecting back on their latest win, he said: “It really was a tale of two halves. I admit the first half didn’t go to plan for us, we were on the back foot for much of the half, didn’t play how we wanted too and yet still went in with a 1-0 lead.

“The second half was though completely one-way traffic and coupled with the fact that Catford didn’t have one shot on goal in the second half summed it all up, I was even able to bring on our right winger at right-back who was able to repel any minimal threats that Catford posed.”

Stern also took exception to Catford player-manager Jeff Gotch, who said: “We were the better team for 60 minutes and didn’t take our chances, they will win the league but they certainly are no footballing team.” Stern said: “I have to be honest, this shocked me and seemed like a bit of a bitter comment from someone that I used to respect.

“Jeff must be very confused as to what a footballing side looks like because having conceded eight against us in two games, having signed a player specifically to beat us, having watched as we have remained unbeaten for 11 games while his team has struggled languishing in eighth place, I would probably be more interested in fixing my own side than moaning about an opponent who to be honest aren’t in the same league as them.”

In reply, Gotch said: “I’m not bitter and I am very happy to see Nick’s team doing well and top of the league – they certainly deserve it and their record is exceptional – they play a certain way and are very, very good at that.

“I was simply saying that we missed a host of chances to put the game to bed in the first half and we keep the ball down and play a certain style – but maybe he’s right, I should worry about my own team – we have Redbridge, then RCUK and if we can win both we will then have a run of games against the lesser sides and regardless our league position, I would still consider us a top three contender. We have three games in hand on Fortune, so win those and beat them in the return game and we move above them.”