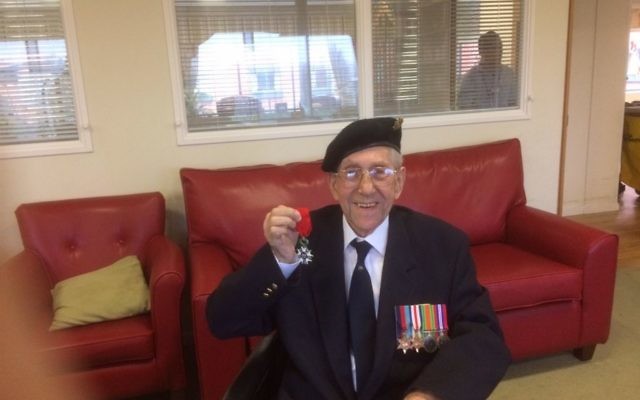 Hyman Pittal with his medal

When David Pittal, from Chigwell, went to visit his parents, Hyman and Rosalind Pittal, at Jewish Care’s Lady Sarah Cohen home, his father asked him why he’d not received a medal from the French government.

Two years ago President Francois Hollande announced that each man who had landed on the northern beaches of France on D-Day would be awarded the Legion d’Honneur, the country’s highest award.

David Pittal made contact with the Ministry of Defence, which passed on his father’s details to the French government. The medal arrived and on Sunday, Jewish Care’s chief executive Simon Morris took part in a warm and loving family ceremony at the Lady Sarah Cohen home, where “Driver Pittal’s” relatives and friends gathered to pay tribute to him and his honour.

The one-time Petticoat Lane fruit and vegetable trader had been called up in 1941 and joined the RASC, driving army lorries and staff cars after his training. His parents were from Poland and the family — of which he was “the baby” — had lived in the East End before his army service.

Mr Pittal recalled driving a lorryful of ammunition from the Normandy beaches to Caen, where he saw “a whole city wiped out, except for the church”. He also recalled smuggling into Brussels a whole group who could not get into the Belgian capital as their papers were not valid. Instead, strictly against army discipline, Mr Pittal urged them into his lorry and drove them into safety.

As a long-standing member of Ajex, Mr Pittal, whose life was saved three times by the Homerton Hospital last summer, was also honoured at the event by the current Ajex chairman Brian Bloom.