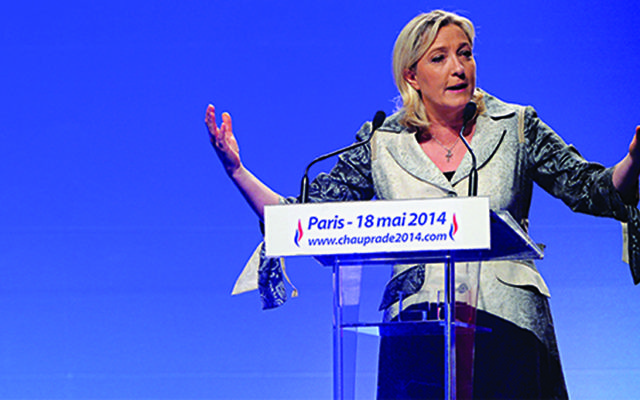 A European Jewish leader has said a victory by far-right candidate Marine Le Pen in this year’s French presidential election would put the future of the country’s Jewish community “in serious doubt”.

Pinchas Goldschmidt, the chief rabbi of Moscow and president of the Conference of European Rabbis, was speaking while in Munich, and warned that the continent’s post-1945 security and political infrastructure now “risks falling apart”.

He said: “Brexit is a sign of this danger. It sends a very strong signal to all the capitals of Europe that things are amiss. The fact that Martin Schultz, the president of the European Parliament, is leaving to go back into German politics speaks for itself. It’s like he’s abandoning ship. ”

Speaking to Jewish News, Goldschmidt said that “more and more people are unhappy with their economic situation, so more and more vote for anti-establishment parties, extreme parties,” when asked about the rise of extremism on the continent.

“There is more and more xenophobia and racism coming into campaigns, as we have seen also outside Europe, in the United States, which is going through a very similar process, of people being unhappy with the status quo power base.”

He said: “People want change. What happened in the U.S. is a revolution. The good news is that Jews are not in the centre of it, but definitely can be collateral damage.”

On Front National leader Le Pen, he said: “Maybe she has not been involved in anti-Semitic slogans, but definitely members of her family don’t have a track record when it comes to racism and xenophobia… Her party was founded by Nazi collaborators.”

Le Pen’s 88-year old father, Jean-Marie, remains the party’s honourary president, despite an unsuccessful legal battle by Marine last year to have him thrown out for saying that the gas chambers were a mere “detail” of history.

For the past five years, Marine has been on a charm offensive with French Jewry, but despite offering to meet European Jewish leaders, most have refused. However, polls in France show that up to 20 percent of French Jews have voted for her FN party, with most citing its tough line on militant Islam and Muslim immigrants.